Where To Spend Summer On The French Riviera

Where To Spend Summer On The French Riviera

A bastion of glitz, beauty and glamour, the French Riviera has long drawn the most discerning travellers for sun-kissed weeks spent luxuriating under the Mediterranean sun in one of France’s most fashionable destinations. From charming Antibes — the place where it all began — and disarming, endlessly handsome Menton on the Italian border, to exquisite Nice and its vibrant old town, these are our picks of the best towns for a summer spent exploring the French Riviera.

A collection of villas in eye-catching shades of yellow, pink and orange, punctuated by the occasional church spire, cascade down the mountainside towards the glittering azures of the Mediterranean, where the pebbly beaches, while full during the summer season are refreshingly less so as the year dwindles — even though the sun rarely stops shining. This, the pretty village of Menton is perched on the edge of the French border with Italy, the last stop before the Côte d'Azur transforms into the Riviera Ligure, and a surprising little town that has all the beauty of nearby Monaco and Nice, but barely a smattering of the popularity.

Away from the beaches, Menton’s charms are aesthetic and culinary — and there’s an undeniable Italian flair to it all. The backstreets of the old town rise and fall in narrow, red-brick streets filled with cafes, shops and the occasional Italian delicatessen, all perfect for lazy summer strolls. Pasta restaurants line the seafront close to the port, and the world’s best restaurant in 2019 — 3 Michelin-starred Mirazur — sits perched overlooking the water and boasts its own gardens filled with enviable produce that chef Mauro Colagreco uses to create exquisite dishes that pay particular attention to Menton’s symbolic citrus fruits. Visit Menton in February to witness the carnival-like Lemon Festival that celebrates the vast lemon harvest with numerous parades and wacky sculptures made from so many lemons and oranges. 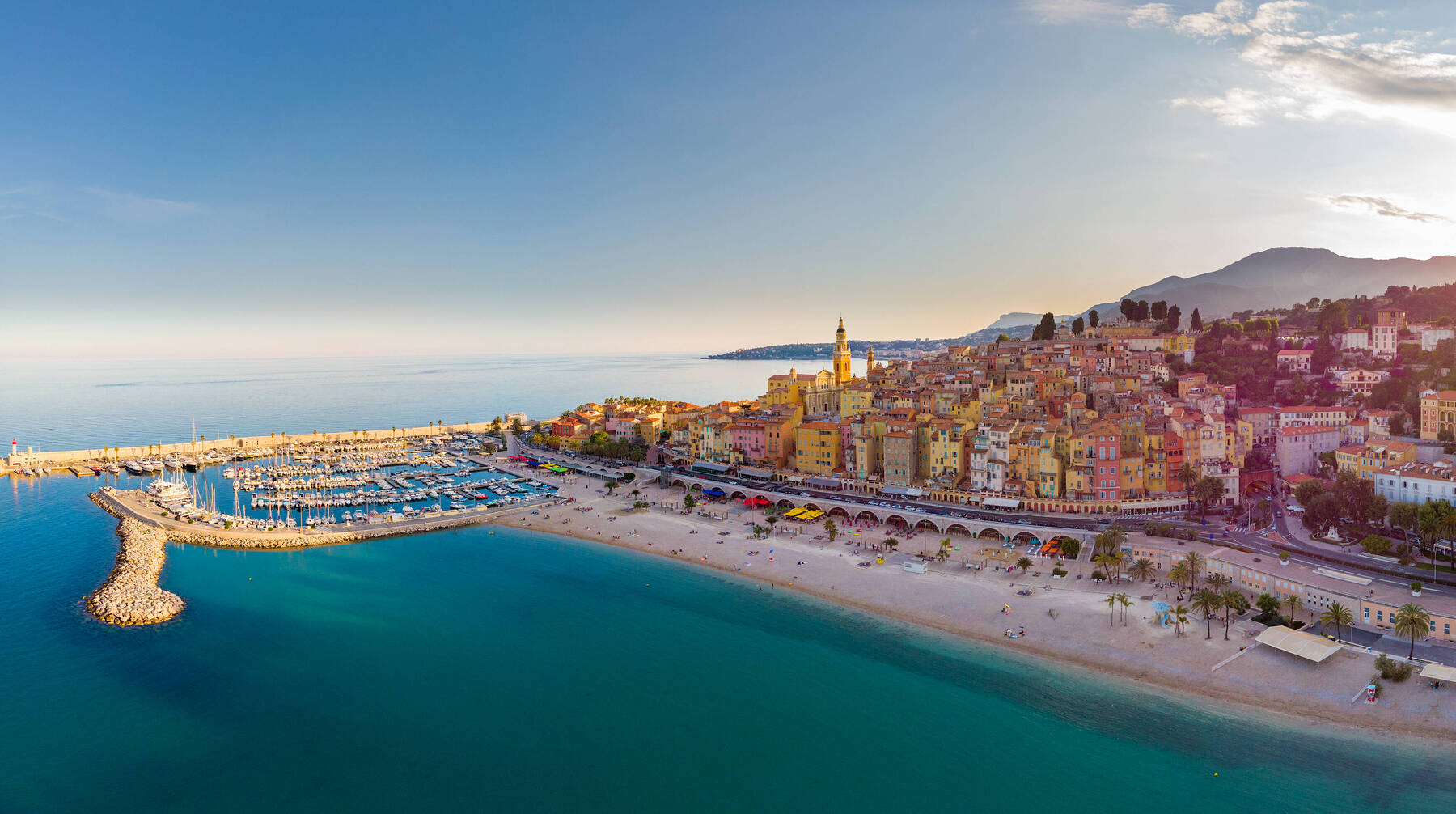 A view of the old part of Menton, Provence-Alpes-Cote d'Azur, France.

Cannes is perhaps best known as a playground for well-heeled celebrities and celebrity-spotters using the Riviera as little more than a glitzy backdrop for film festival photo ops. But dig beneath that undeniably chic surface of boutiques and recently-buffed supercars, and a large part of what made Cannes special — an affinity for restorative summers spent resting and indulging in bouts of people-watching— is still very much alive and well.

Take a long stroll along Rue Saint-Antoine to the cobbled streets of Le Suquet and you’ll find a startlingly attractive old town, filled with pretty little restaurants, a historic church and castle, and breathtaking vistas of the sea and celebrity-studded Boulevard de la Croisette. But if the crowds become too much, escape on the ferry to the nearby Illes de Lérins. Choose Ille Ste-Marguerite to luxuriate on its idyllic beaches and rustic hidden coves, or Ile St. Honorat to visit the monastery and to sample the monks’ prized organic wines that are often featured on France’s state dinner menus. 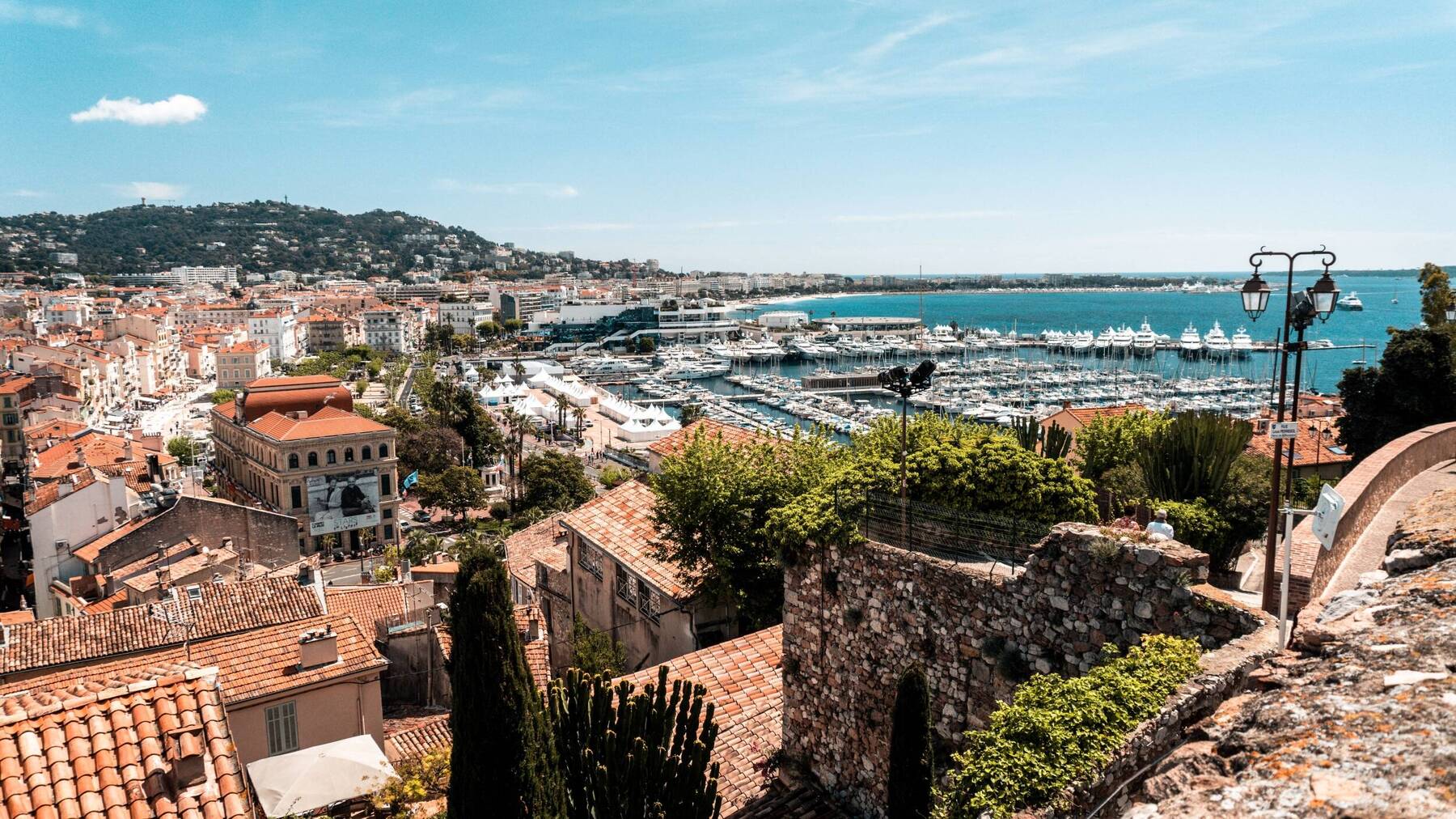 If Cannes is defined by the film festival and the throngs of celebrities that now come with it, then Antibes is pure paint and ink: colourfully depicted on numerous occasions by Picasso, raved and written about by F. Scott Fitzgerald, and brought to life by the parties thrown by expatriates Gerald Murphy (an artist as well as a patron) and Sara Murphy (a friend and regular model for Picasso). One might add that the Murphys are generally thought of as responsible for popularising the French Riviera as a summer destination (as well as inventing the word “sunbathing”) with their flare for parties, and their lust for life (hotels often closed for the summer, awaiting the arrival of wealthy Brits and Russians in the winter) — making Antibes the place where the Côte d'Azur of today — a highlight of the summer calendar — all began.

Of particular interest to travellers is the collection in the Musée Picasso inside the white stone Château Grimaldi, the yacht-filled envy-inducing marina, the stunning stretch of seafront at cap d'antibes and the delightful antique streets of the old town, filled with charming restaurants, chic hotels and Antibe’s striking 16th-century ramparts that look out to snow-capped mountains in the distance. 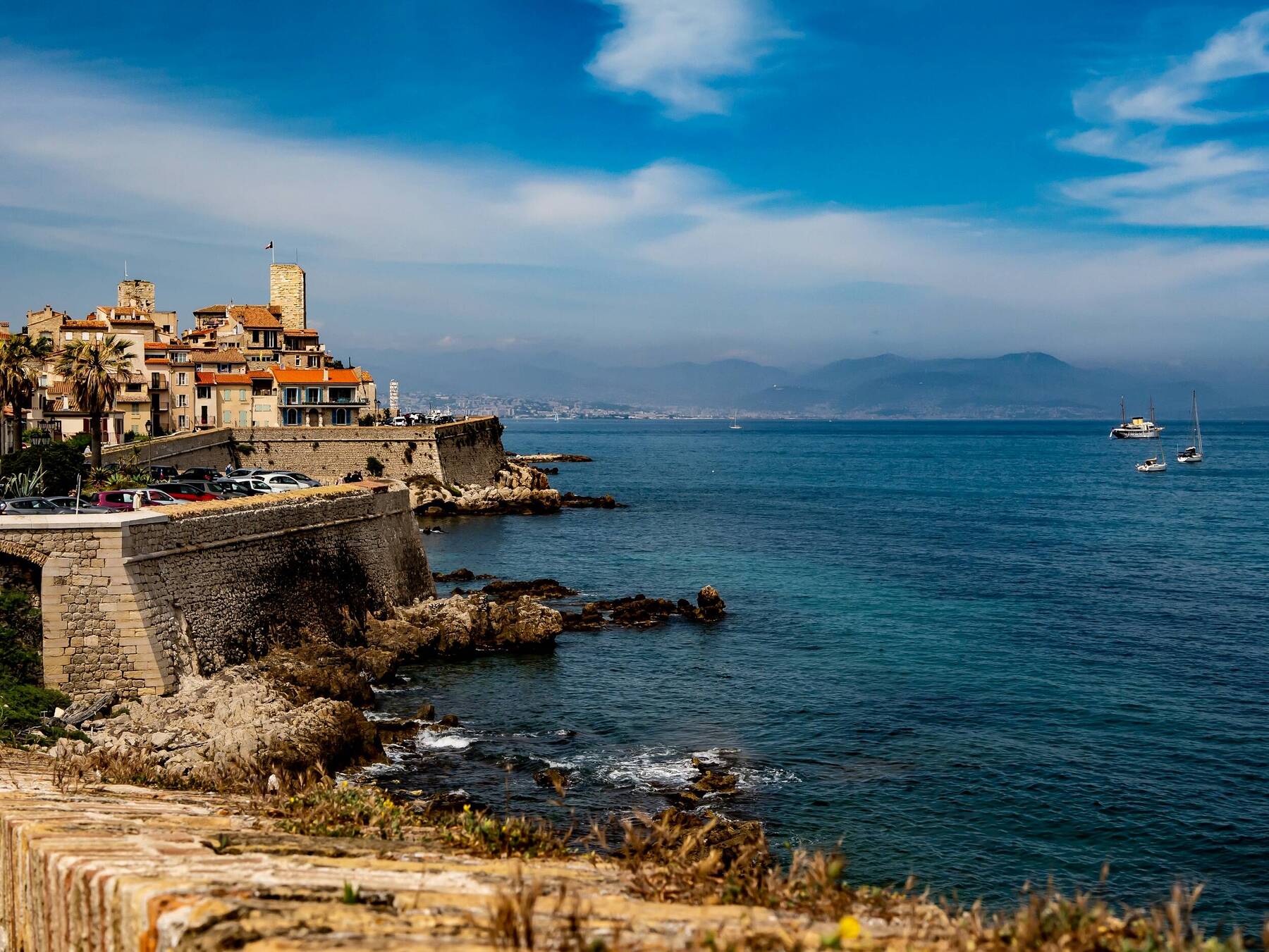 It would be difficult to talk about the Côte d'Azur without mentioning stunning, Italianesque Nice. Indeed most trips begin and end in the town. Start by ascending Castle Hill to see the Roman Ruins and the gardens (complete with an 18th-century artificial waterfall) and to take in those dreamy vistas of the boardwalk and the sunset-shaded rooftops of the Vielle Ville and then descend right down into it all to explore the old town’s maze of narrow, flower-speckled streets — filled with bistros and houses adorned with colourful Portofino-like cheer.

Take a seat in a cafe for an afternoon of people watching in the backstreets if languid summer laziness is what one’s looking for, eat the local chickpea pancakes (socca) from one of the street food vendors for a taste of Nićois cuisine, and stroll along the Promenade des Anglais to breathe in the sea air and join the sun-basking throngs on the beach. 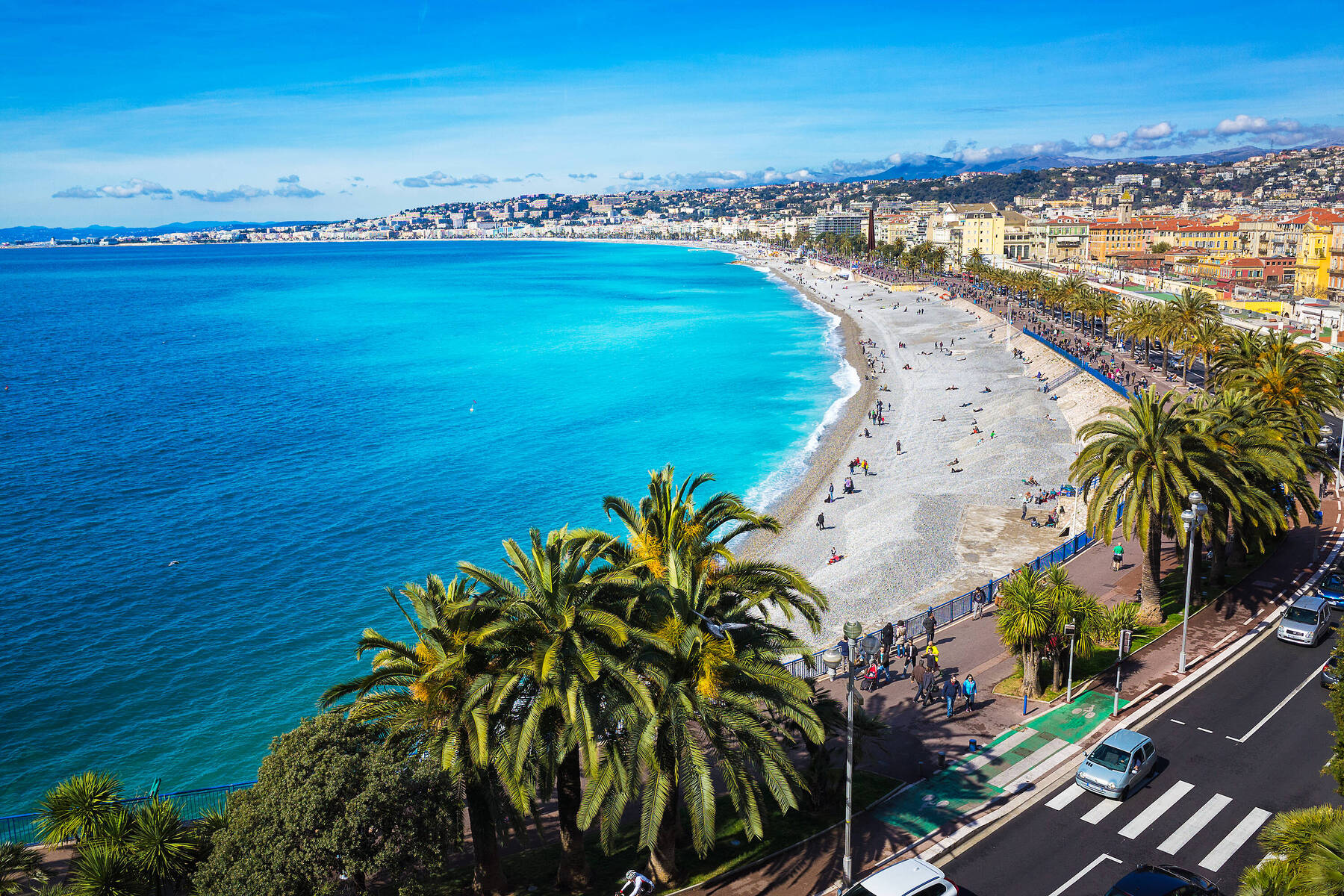 Promenade des Anglais viewpoint with the city and the airport in the background, Nice, France.