Think of Brazilian beaches and the first that come to mind are probably Rio de Janeiro’s Ipanema and Copacabana. But with a coastline of around 7,400 kilometres, Brazil has a lot more to offer. On the north-east and eastern coast, there are a number of popular spots that Brazilians head to. Given that the beaches stretch for kilometres they’re not overcrowded and there’s plenty else on offer if you tire of sunbathing. If it’s shopping you’re into be aware, most stores shut over the hottest part of the day.

See the Cliffs of Canoa Quebrada

Around 160km south of Fortaleza, Canoa Quebrada is located on the north-east coast. Once a small fishing village, the population is still only about 3000 but it’s been on the tourist map since the 1970s and become one of the most visited beaches in the region.

Down Broadway, the main, white and grey stone-paved thoroughfare, there are clothing shops (one with a floor of deep sand), supermarkets and lots of good restaurants. Broadway leads to cliffs which overlook the long coast and the Atlantic Ocean, and where paragliders can be rented and launched from.

On the beach, reached via stairs at regular intervals along the cliffside, the day can be spent on deckchairs nearby restaurants built on piles, high enough to walk under, with plastic tables and umbrellas set out on the sand. The symbol of Canoa Quebrada, a new moon and star, can be seen carved into the cliff.

Perhaps kite surf, or take a dune buggy which travels along pale golden sand beaches, stretching as far as the eye can see. Kilometres of cliffs, yellow, red, white, or layers of those colours, and the pink cliffs at Ponta Grossa, 40 kilometres south-east of Canoa Quebrada, extend along its length. The cliffs are spectacular with spots of lilac, orange, yellow, golden yellow and ochre red colours rippling and flowing into each other. White-sailed traditional fishing boats – jangada, like mini dhows – dot the shoreline and sea, brightly painted in greens, blues and yellows. Leaving the beach the buggies blat to the top of sand dunes for views of the forever coast. Stops are made for swimming and at Fontainha, where sculpted sand cliffs have been eroded away by a freshwater river forming stalagmite type formations. 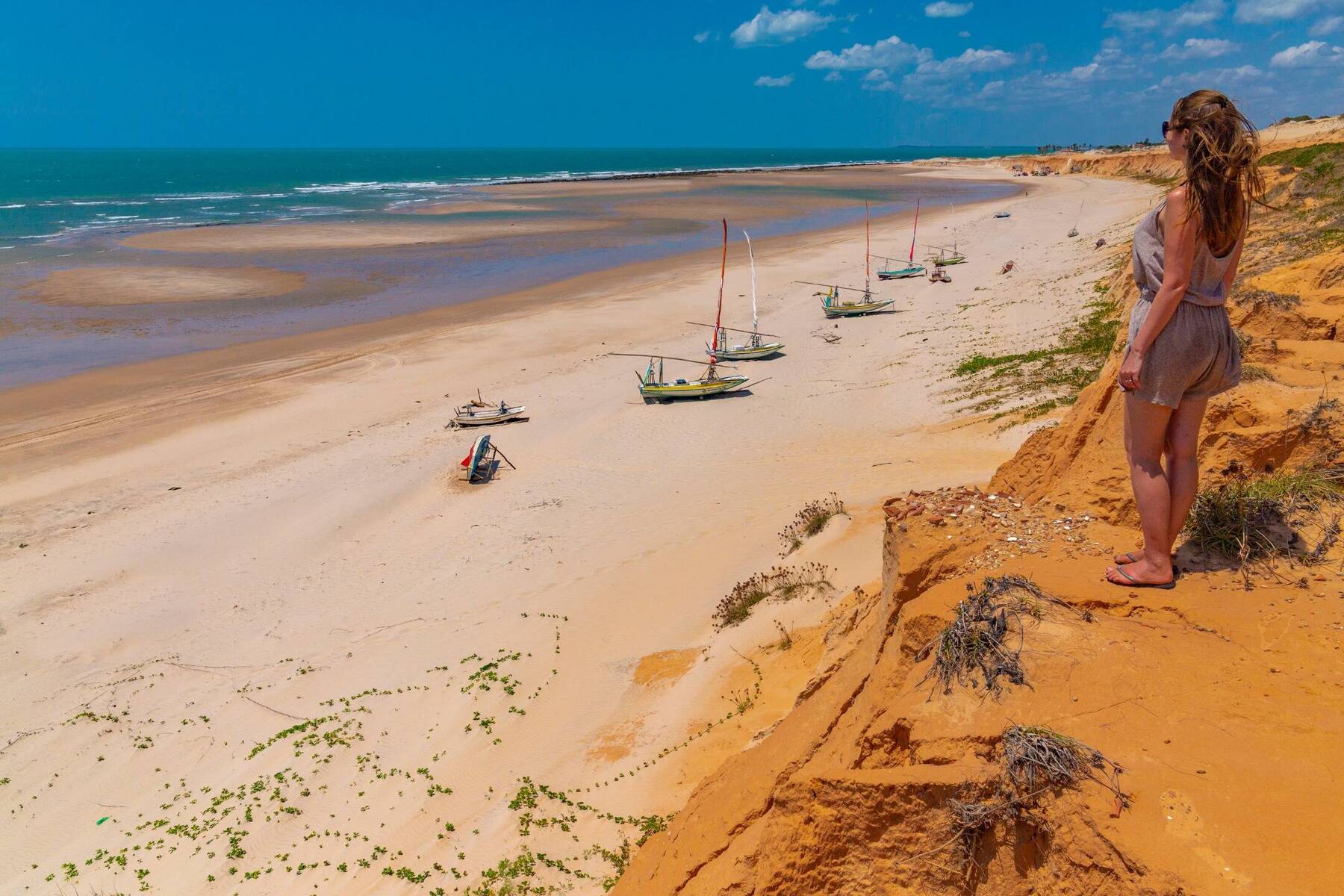 On eastern Brazil’s Cocoa Coast, around 250 kilometres from Salvador Da Bahia, Itacaré is a small beach town situated on the edge of rainforest. It’s laidback with bays of white sandy beaches, a number of them easily walked to. Heading away from town along the unevenly black cobbled Rua Pedro Longo, are four. The furthest and largest, Ribeira, is around a 2-kilometre walk. A crescent-shaped bay nestled by forest, it has a zip-line running overhead and restaurant with red plastic tables, chairs and yellow sun umbrellas dotting the sand. The beaches are separated by small rocky outcrops which can be crossed to reach the next bay rather than taking the road. Locals walk between them selling food - bbq kebabs cooked over a can of coals, empanadas, cold drinks and ice-creams from refrigerated carts. It’s possible to bushwalk several kilometres further on from Ribeira to other isolated beaches, but the trail is tricky to find. With plenty of large waves, beaches have lifeguard stations and flags to swim between.

Closer to town, the beach of Praia da Concha is busier with a number of accommodation and restaurant options along the shorefront. The harbour, further around, is dotted with colourful buildings looking out to the beach and fishing boats bobbing. The area is a little run-down but full of character.

Rua Pedro Longo, the main street, is pedestrianised and full of lively restaurants in the evening 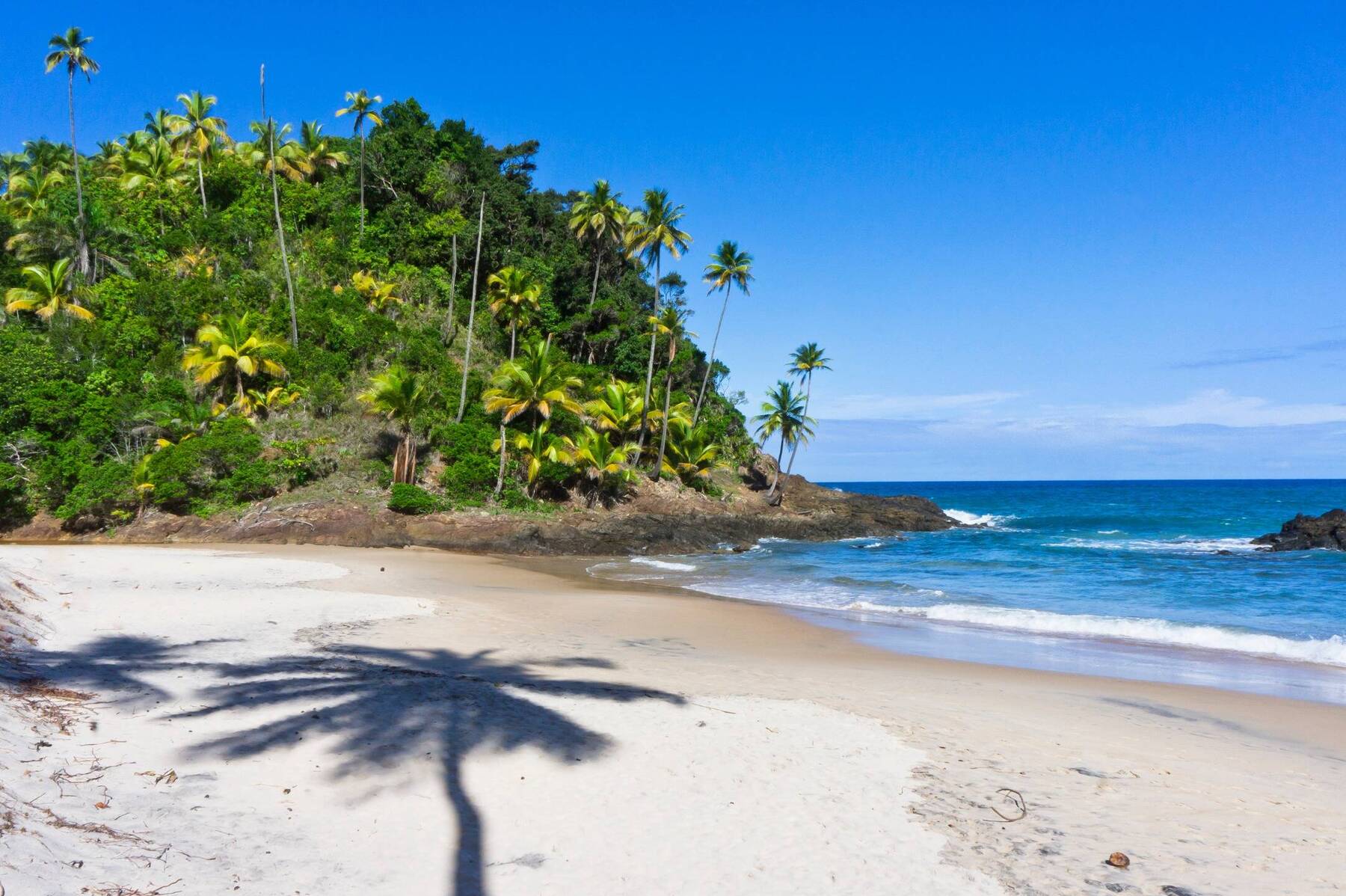 Find Dolphins in Praia do Pipa

Three hour’s drive north of Olinda and south of Natal, Praia do Pipa is reached via a dirt, potholed road off the main highway. Not much is expected at the end of it, but this once fishing village surprises with a number of upmarket boutiques, jewellery stores, nice restaurants, cafés and ice cream parlours. There’s a good viewpoint in central town to look down on the beach of Praia do Centro, where restaurants have tables and chairs on the sand. Patrons can dine with their feet in the water as the tide comes in.

Cobbled Avenida Baia dos Golfinhos becomes tired looking the further away one walks but off it, on R. Praia do Amor there are a number of luxurious-looking resorts surrounded by greenery. A dirt track off this street leads to cliff-side stairs down to Praia do Amor. From this beach, it’s possible to walk back to town along the whitish-gold sands with a cooling sea breeze, rather than along sweltering streets. Pink cliffs skirt the coast, sun umbrellas and deckchairs dot the sand.

At the other end of town is Baia dos Golfinhos, where dolphins can be seen. The beach, probably the nicest but least popular, is only accessible at low tide, however, it’s possible to take a dolphin-watching boat tour. 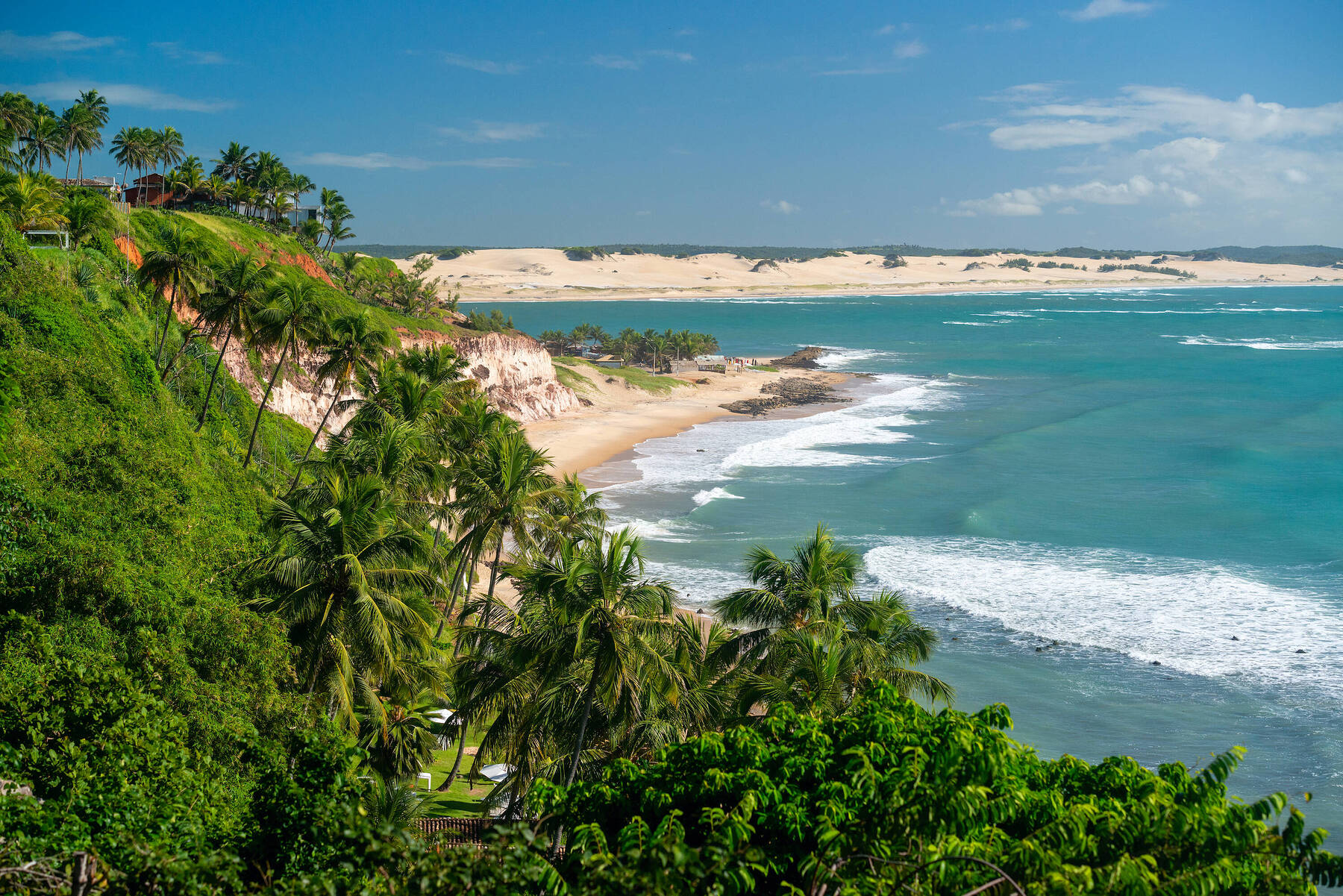 Getaway from it all in Jericoacora

Jericoacora, is a north-eastern beach town, the only access via 4WD across sand dunes for 15 kilometres from the town of Jijoca. Building is restricted with no large hotels but plenty of nice accommodation and restaurants along its few sand streets. Watch the sunset, along with many others, from atop the massive white sand dune nearby town. As the sun slips below the horizon it apparently flashes green, a phenomenon occurring in only a few places around the world. Dance the night away on the beach where mobile bars form a semi-circle around the ‘dancefloor’.

Jericoacora National Park adjoins the town and worth exploring on a sand buggy tour. Travelling through dramatic sand dunes, beaches are visited first before heading into the dunes again and stopping off at freshwater lagoons in the middle of nowhere. With turquoise water, beach hut bars and at the larger Lago Paraiso, a never-ending lagoon, there’s a resort. Relax in hammocks in the water, or on deckchairs on the beach, dining at beachfront tables. 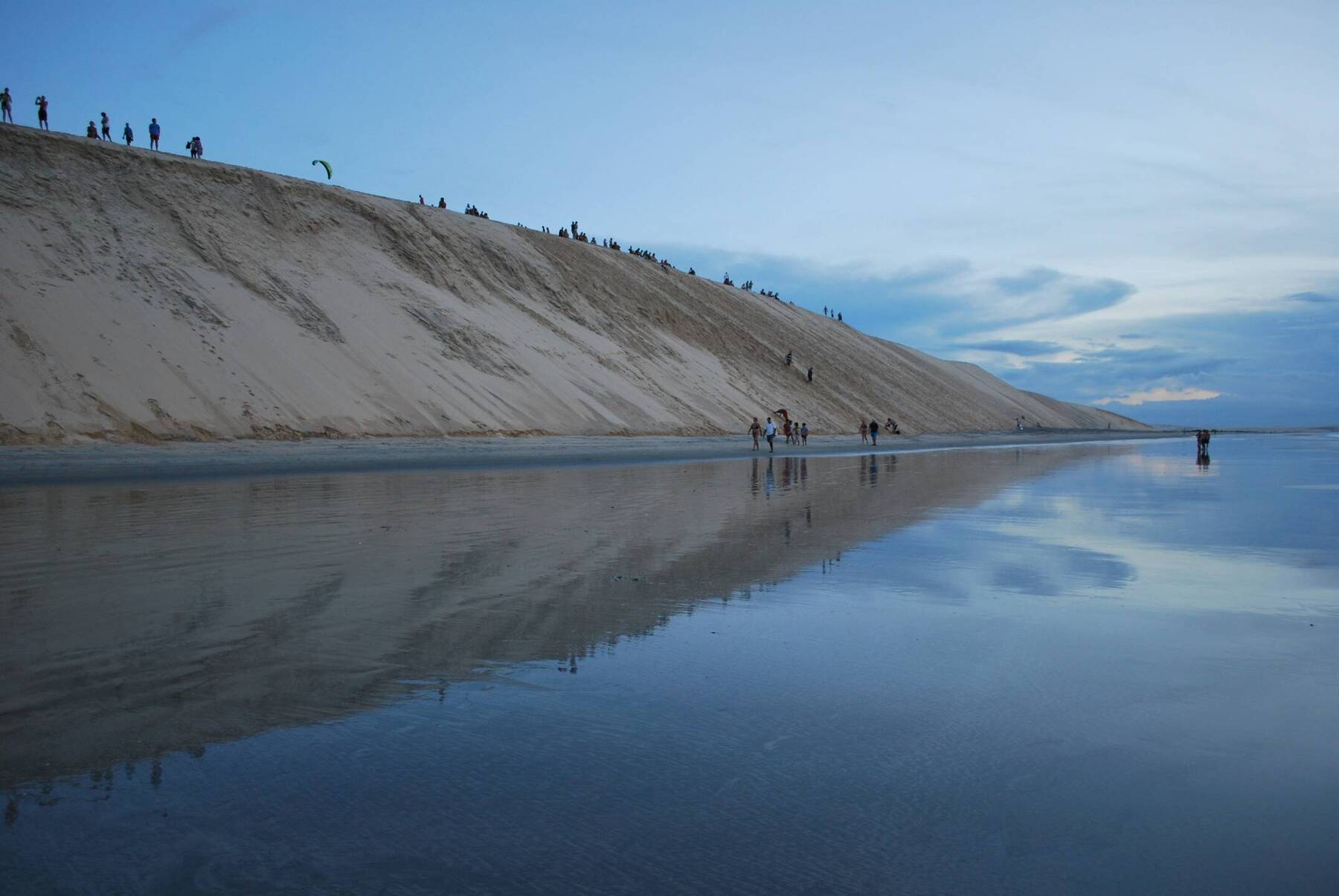