Yes, there’s more to the country than Rio de Janeiro, beaches and the Amazon! A number of Brazil’s towns are UNESCO World Heritage sites for their culture and the architecture of colonial times and by wandering then, you’ll learn about their history. Also named on UNESCO’s list is the capital city, Brasilia, for its modernist architecture and urban planning. With little history, it’s completely different with little atmosphere, but also worth spending time in.

Once the richest city in the New World, Ouro Preto is an old gold-mining town founded in 1698. Steep, unevenly, cobbled streets are lined with mainly white, two-storeyed buildings. Painted blue, yellow, green or red around windows and doors, with foot-wide balconies window boxes and lanterns hanging from walls they’re picturesque.

So are the churches, of which there are thirteen. Igreja de Sao Francisco de Assisi, built between 1766 and 1802, is baroque in style with circular bell towers and an ornate sculpture above its heavy green wooden doors. Inside there’s lots of gold covered woodwork and a painted ceiling not unlike something seen in the Sistine Chapel. Numbers on its dark wooden floor mark graves. Matriz de Nossa Senhora do Pilar, built in 1696 and expanded in 1712, is breathtaking with around 400kg of gold and silver powder used in the nave and around the altar.

On main square, Praca Tiradentes, a statue honours Tiradentes, the leader of the rebellion against Portuguese colonialists. Overlooking it, Escola de Minas houses the Mineralogy Museum. There’s a huge display of fantastically coloured gemstones. Minas Gerais State, where Ouro Preto is situated, is known for its topaz, aquamarine, and other gems.

The 18th Century gold mine, Mina JeJe, which runs beneath residences can be visited. The pick marks of black slaves can still be seen, the history of slavery and mining saddening. More can be learnt at Casa dos Contos, once the gold exchange then a prison, where slavery artefacts, torture weapons and mining tools are displayed. 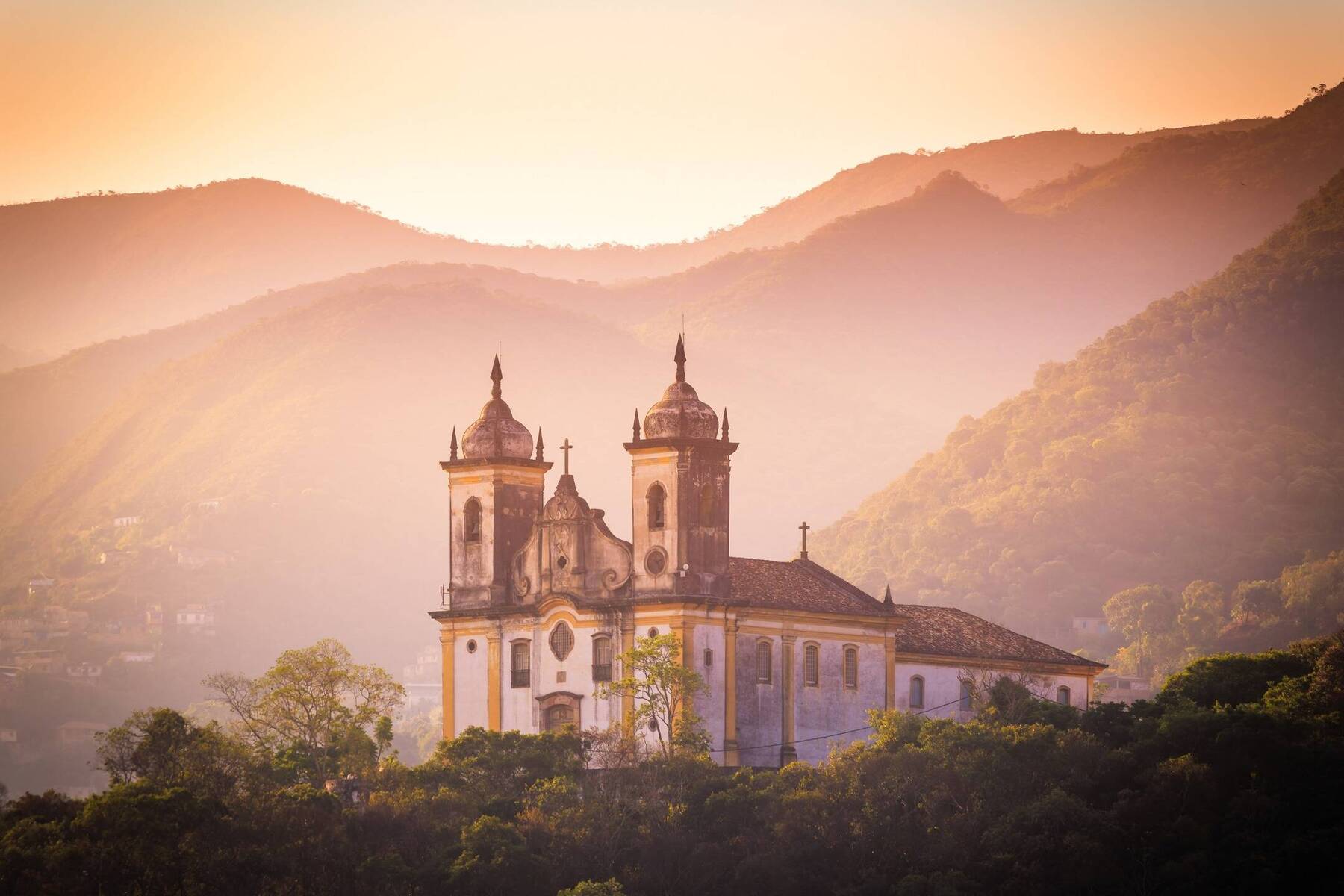 The north-eastern coastal town of Sāo Luís, founded by the French in 1612, has seen better days. Amongst beautiful pastel-painted colonial buildings are those with black mould, broken windows, graffiti, and vegetation growing from rooves and windows. It adds to the charm. Other buildings are covered with azulejos, painted glazed tiles, with some of the best examples on Rua Portugal. The historical centre is being restored, an ongoing project since 1989.

Casa Das Tulhas, is a small market where mountains of prawns in woven palm leaf baskets sit alongside sack-sized bags of brazil and cashew nuts, and tapioca. Purple cassava liquor looks dubious alongside other concoctions in reused plastic bottles.

The restored, gleaming white, Palácio dos Leōes sits on a highpoint overlooking the bay. Built in the 18th Century, the two-storied State Governor’s Palace is used for government offices although tours can be made through several rooms housing antiques and art. The 17th Century cathedral, Igreja de Sé, has beautiful sky-blue ceilings with religious scenes painted on them and a gold altar.

Artefacts from native times and a photographic display of Sāo Luís in its heyday are displayed at Casa do Maranhao. Upstairs are elaborately beaded costumes, feathered headwear and masks from the colourful folkloric festival Bumba Meu Boi – celebrated every June for over 200 years. 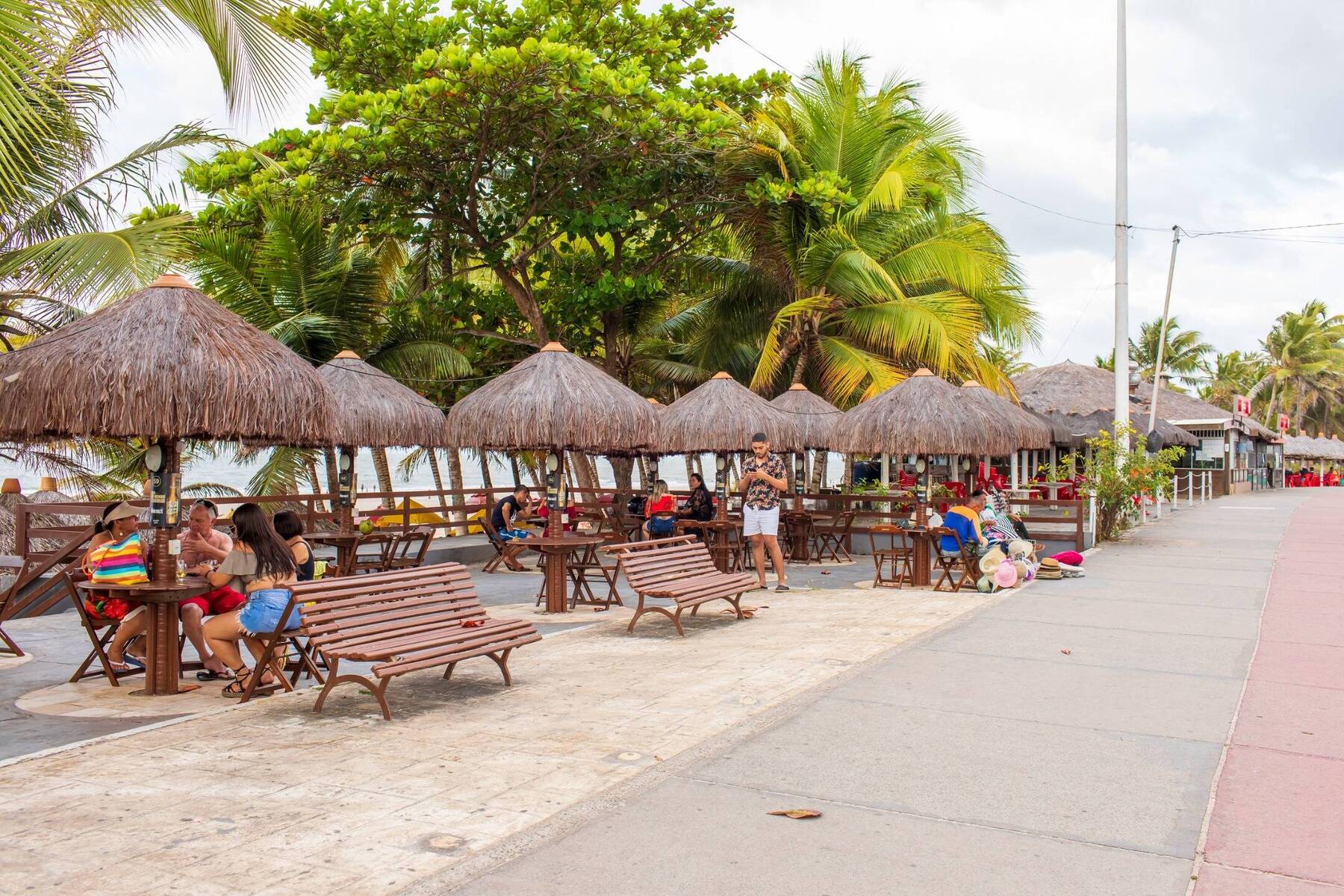 Olinda, on the north-eastern coast, was built between the mid-1600s and 1800s, much of it on a hillside.

The narrow, cobbled streets are a maze of one and two-storey colonial, pastel and brightly-coloured buildings with contrasting colours on their corners and around windows and doors. It’s a living crayon box.

It’s a steep climb from the waterfront to the highest square, Praça da Se, where the church Igreja da Se stands with views of, amid greenery, orange rooves and church spires (there are 16 churches), the turquoise sea and Recife’s distant high-rises. The square is the site of Mercado de Artesanato de Sé, a handcraft market with several other handcraft markets and artisan shops in the area.

Opposite, Elevador Panoramico is modern ugliness but gives fantastic views.

Puppets are a big thing here with Olinda’s Carnival featuring giant ones. Some are exhibited at Casa dos Bonecos Gigantes. Museo do Mamulengo is dedicated to smaller puppets with a display also in Mercado Eufrasio Barbos. 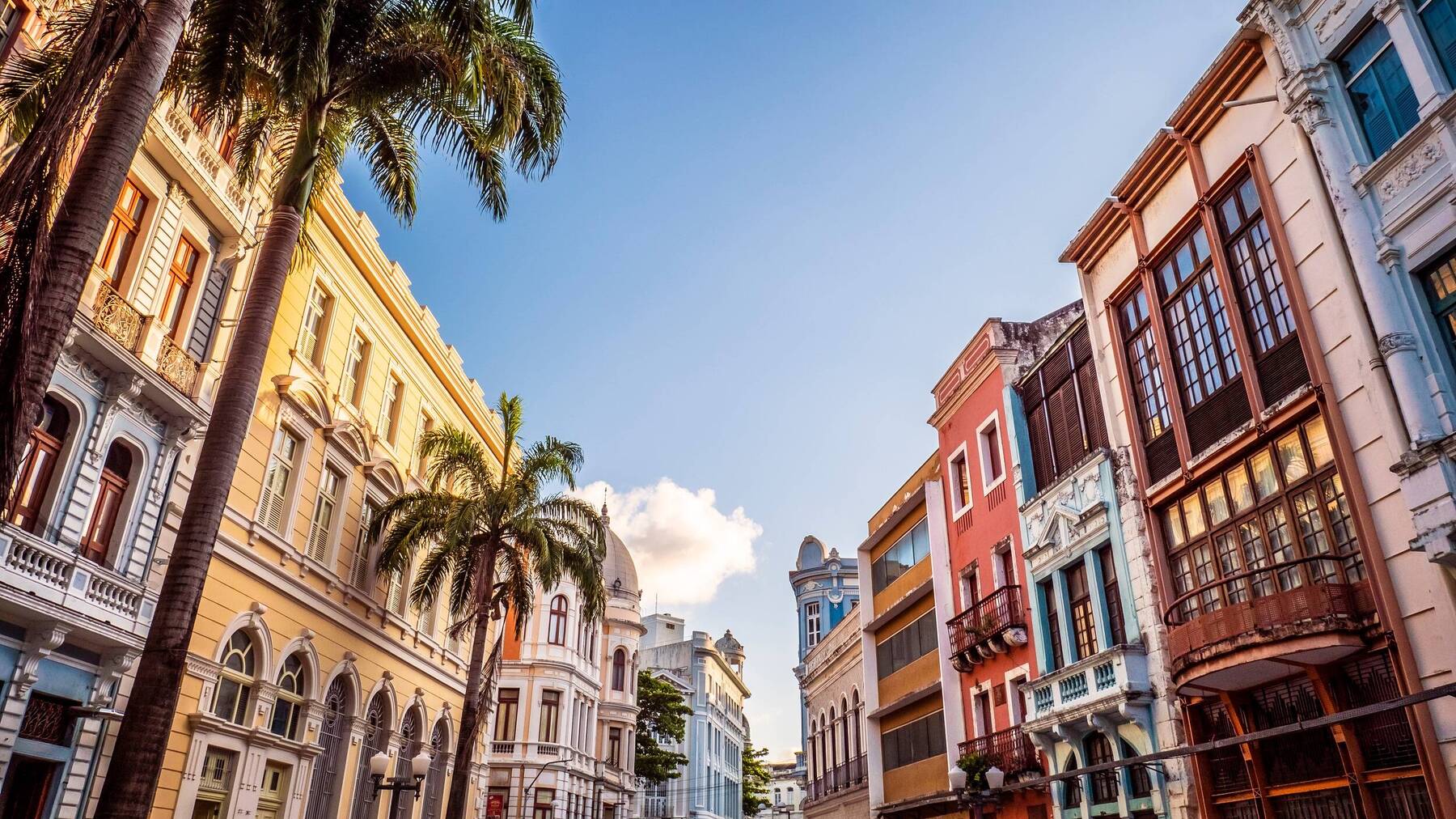 See the Planned City of Brasilia

Open, green Brasilia feels uniformed and looks futuristic. Built between 1956 and 1960 to be the capital of Brazil, it was designed in a plane shape, the ‘wings’ for residential areas and the ’body’, government buildings.

Worth seeing are Alvorada Palace, Itamaraty Palace, Palácio da Justica where waterfalls disgorge from the front of it, Congresso Nacional consisting of twin towers and two half domes one of which is upside down, and flying saucer-looking Museu Nacional. The white Metropolitan Cathedral is eye-catching, shaped like a crown of thorns with a stained glass ceiling of blue, green, white and brown. Three angels, several metres long, hang by steel cables from the roof. Dom Bosco Cathedral is spectacular. Between pillars, from floor to ceiling, are walls of blue glass squares in twelve shades. A magnificent chandelier over three metres high made of 7,400 pieces of golden Murano glass and weighing 2.5 tons, adds to the splendour.

The residential ‘wings’ are set out in blocks, each with apartments, church, shops, restaurants, schools and recreational areas. All buildings are uniform, the ground level open to give a feeling of openness.

On the first Sunday of every month, one of the world’s largest flags is changed in a ceremony finishing with a gun salute, in Praça dos Três Poderes. Flying at a height of 110 metres, the 186m² flag weighs about 600 kg.

In Espaco Lucio Costa, under the square, is a full-scale model of the city giving a better idea of its layout.

A tour is worth doing given it’s quite a walk between sights. 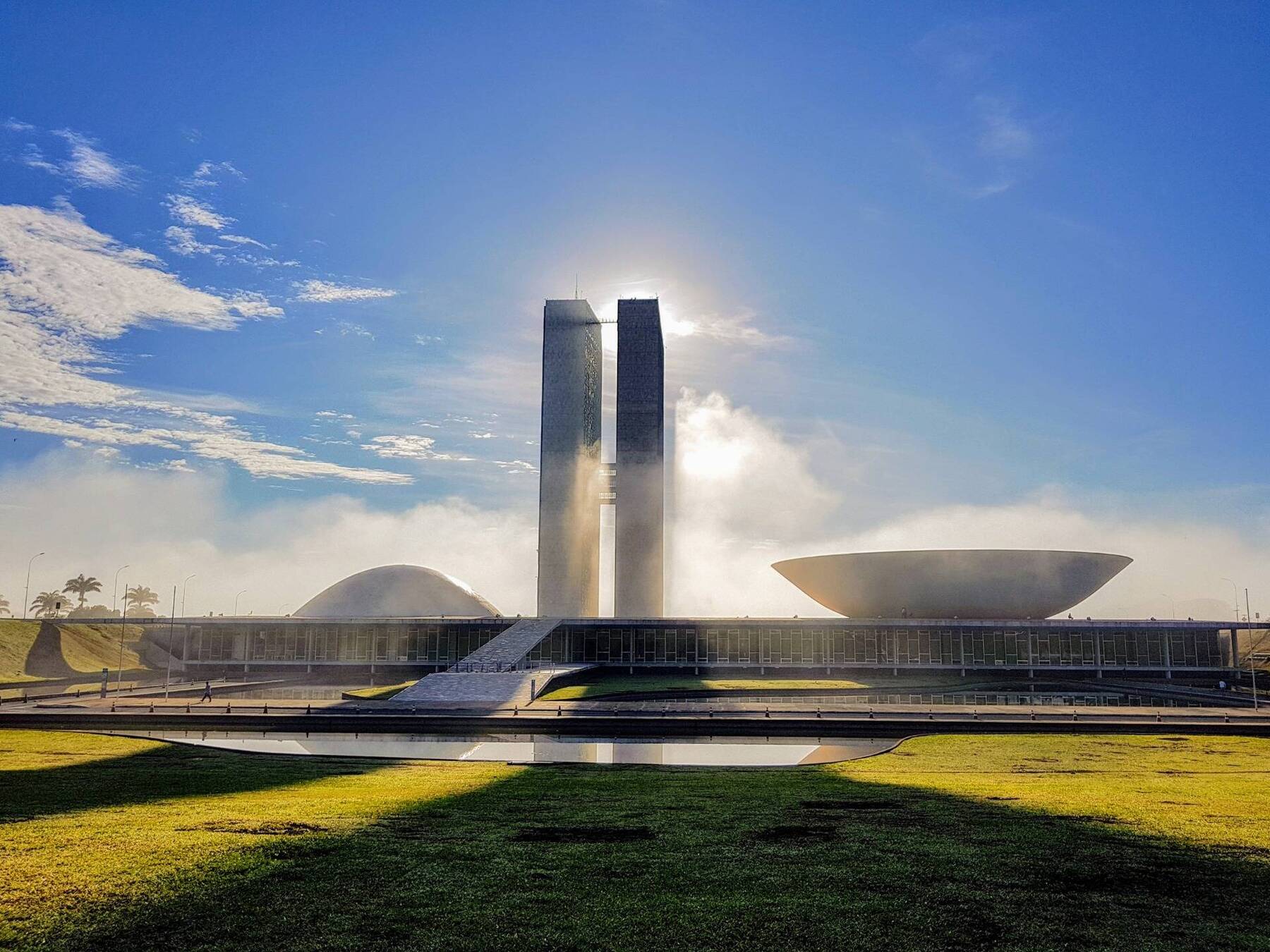