Dia de Los Muertos is Mexico’s most captivating festival and is celebrated each year between the 31st October and the 2nd November. The event honours those who have passed to the spirit world and is a compelling blend of reflection and exuberance, rooted in a combination of pre-Hispanic beliefs and Catholicism.

Why visit Mexico during the festivities?

Throughout the country, different regions have their own distinctive variations of the festival. Streets are festooned with colourful papel picado, flowers are abundant, and images of skeletons can be seen everywhere. Families gather at the cemeteries to await the return of the spirits. Mexico is fascinating at any time of the year, but is particularly compelling during Dia de Los Muertos.

A few days before the festival, altars start to appear in the streets and public buildings. Each of the altars is dedicated to a specific individual and are lavishly decorated with the deceased’s favourite food or drink along with candles, flowers and a photograph. Papel picado (a string of colourful, intricately cut tissue paper) often adorn the altars. Many of them are nothing less than spectacular. To build their altars, locals shop at vibrant Dia del Los Muertos markets which spring up at the beginning of October.

The fragrance of cempasuchil (marigolds), the official flower of the festival, fills the air and is believed to lead the dead back to the ceremonial altars. Tapetes de arena are elaborately created sand tapestries, often depicting skeletons and can be seen in streets and plazas. Many towns hold contests for the best tapetes and competition is fierce. 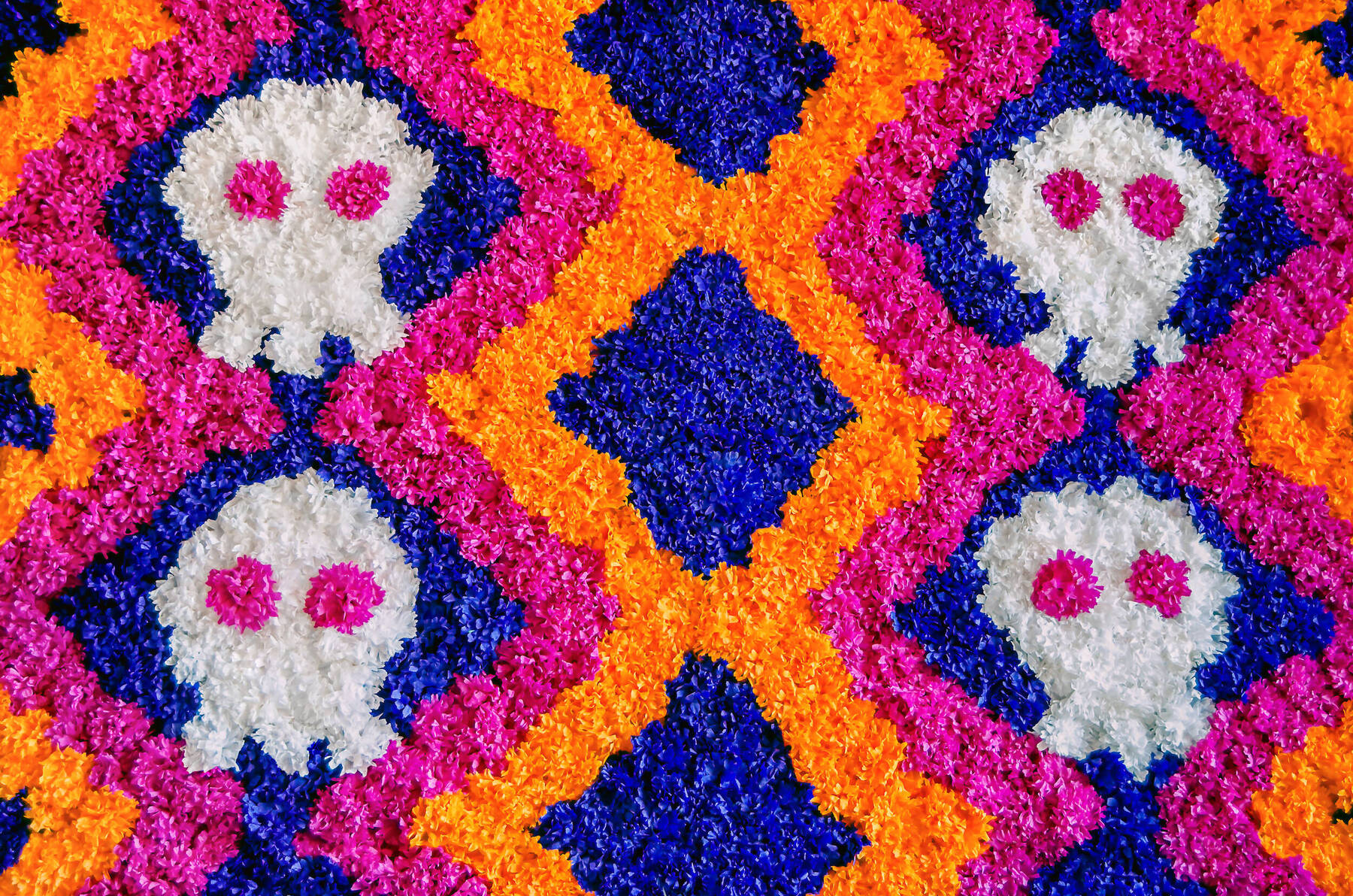 Mural of flowers and skulls, Mexico

Food of the Dead

Pan de muerto, bread of the dead, is sold in supermarkets and cafes leading up to the Dia de Los Muertos. A sweet bread, it is often decorated with bones or skulls and sometimes baked in the shape of a body with arms crossed over the chest.

Much effort goes into cooking the food loved by the spirits in life and is placed on the altars to entice them back. It is believed that the spirits are able to imbibe the essence of the offerings and the food is consumed by the living after the spirits have departed.

Sugar plays a large part in Day of the Dead celebrations and exquisitely decorated Calaveras de Azucar (sugar skulls) can be seen piled high in the markets. Chocolate coffins, skeletons and crosses are very much in evidence and hot chocolate is a favourite winter-warmer at this time of the year. Candied pumpkin is often placed on the altars and graves. 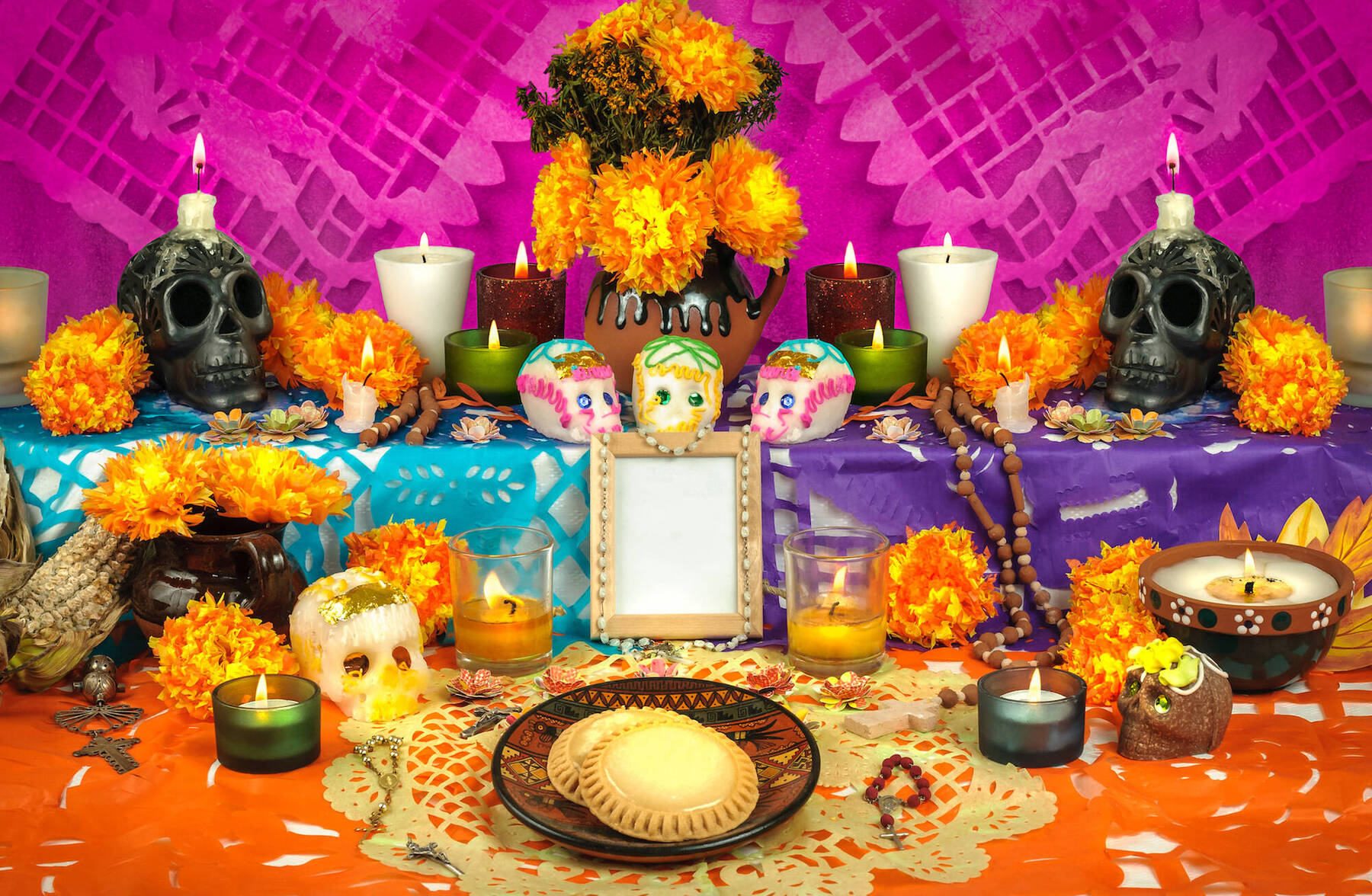 Cemeteries come alive during the festival as families gather around the gravestones sharing food, drinking mezcal, playing music and remembering their loved ones. Spirits are often welcomed back with Bienvenidos signs placed on the graves. Flowers play an integral part of the festivities and locals enter the cemeteries laden down with marigolds which are placed on the graves.

Children play amongst the gravestones, while family groups sit together, often cloaked in blankets to ward off the cold night air. Each gravestone is transformed into a work of art, unique and personal. Abundant with flickering candlelight, cemeteries are magical places to visit during Dia de Los Muertos. It is perfectly acceptable to wander through cemeteries as long as you behave in a courteous and respectful manner. Make sure you ask permission before you take a photograph of a grave. Locals are quite used to tourists and some people will want to tell you about who they are honouring and share their traditions with you. If you are lucky, you may even be offered a shot of mezcal or tequila! 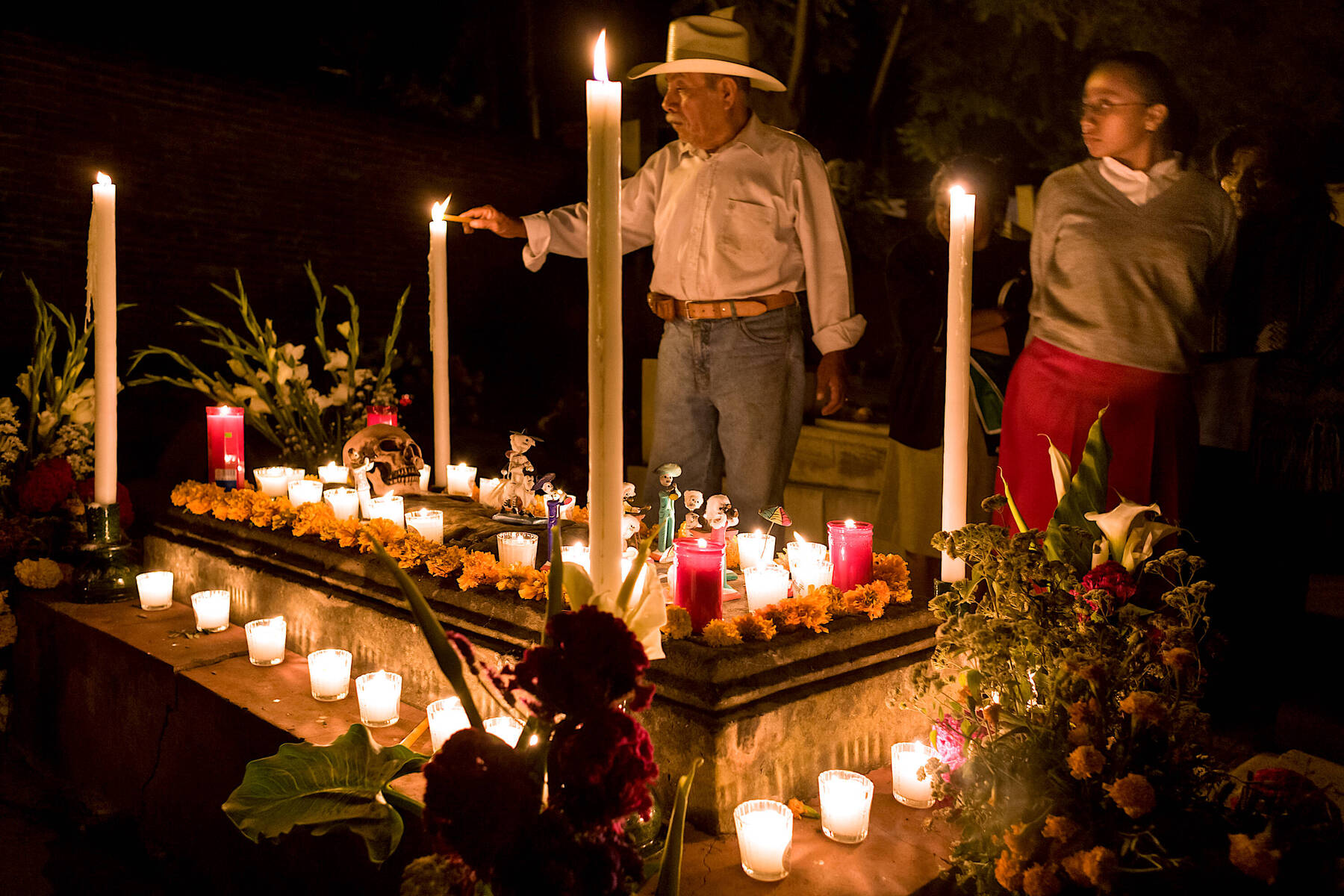 Skeletons are an intrinsic part of Mexican culture, whimsically representing life after death. In the weeks approaching Dia de Los Muertos, the shops and markets brim with skeletons, often portrayed with a humorous slant. Engaging in activities from guitar playing to fishing, they each represent the favourite activities of those who have passed on.

La Calavera Catrina is a Mexican icon and often referred to as the ‘Grand Dame of Death’. Easily recognised by her flamboyant hat, she is dressed up to the nines and symbolises the fact that the rich and poor are equal in death.

Both children and adults have their faces painted in elaborate designs to look like skulls. Grinning skeletons can be seen sitting in windows or standing outside buildings and dancing skeletons cavort through the streets in parades. 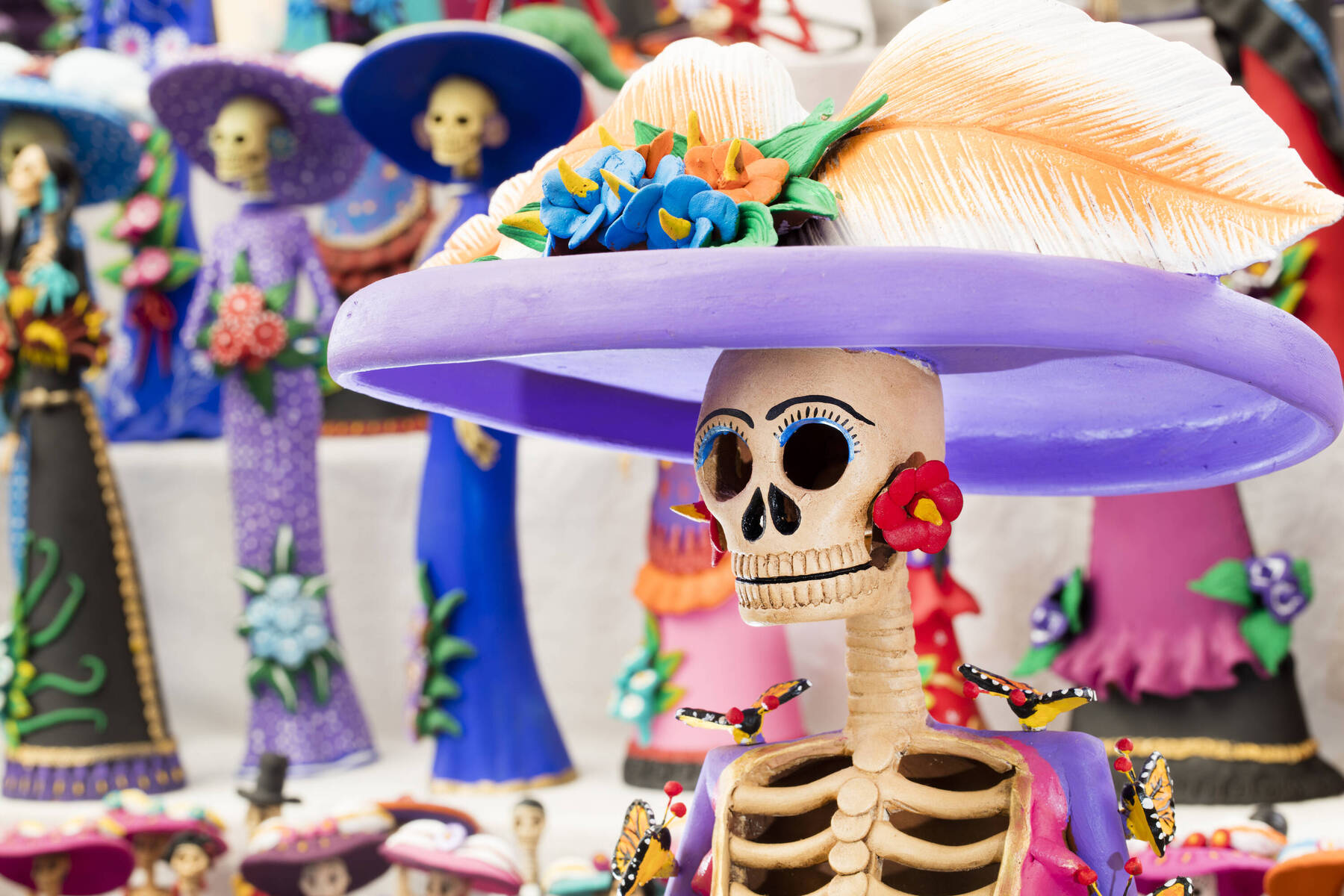 Where to head for Day of the Dead

One of the most enchanting destinations to visit during Dia de Los Muertos is the island of Janitzio in Patzcuaro. Canoes transport the indigenous Purepecha people to the island’s cemetery. Each canoe has a single candle in its bow, creating a poignant image as the candlelight illuminates the lake.

In Mexico City, floats wind their way from Paseo de la Reforma to the Zocalo. The parade is a juxtaposition of traditional and contemporary and has only been taking place since 2016. The suburb of San Andreas Mixquic offers a more traditional experience with its candlelit graveyard, live music, processions and festive atmosphere.

The cobbled streets of colonial San Miguel de Allende are the scene for a week-long party which culminates in ‘The Catrina Parade’ on the 1st November. Hundreds of participants attired as Catrina take to the streets. The event is all-encompassing and attracts locals, ex-pats and tourists alike.

Comparsas are carnival-like parades which take place in and around Oaxaca. Participants dress in imaginative and fantastical costumes, as is befitting for a city known for its artisans. Another highlight is a giant sand tapestry which is displayed at the Palacio de Gobierno every year. The outlying villages are also fascinating to visit during the festival, as they each have their own unique take on Dia de Los Muertos. 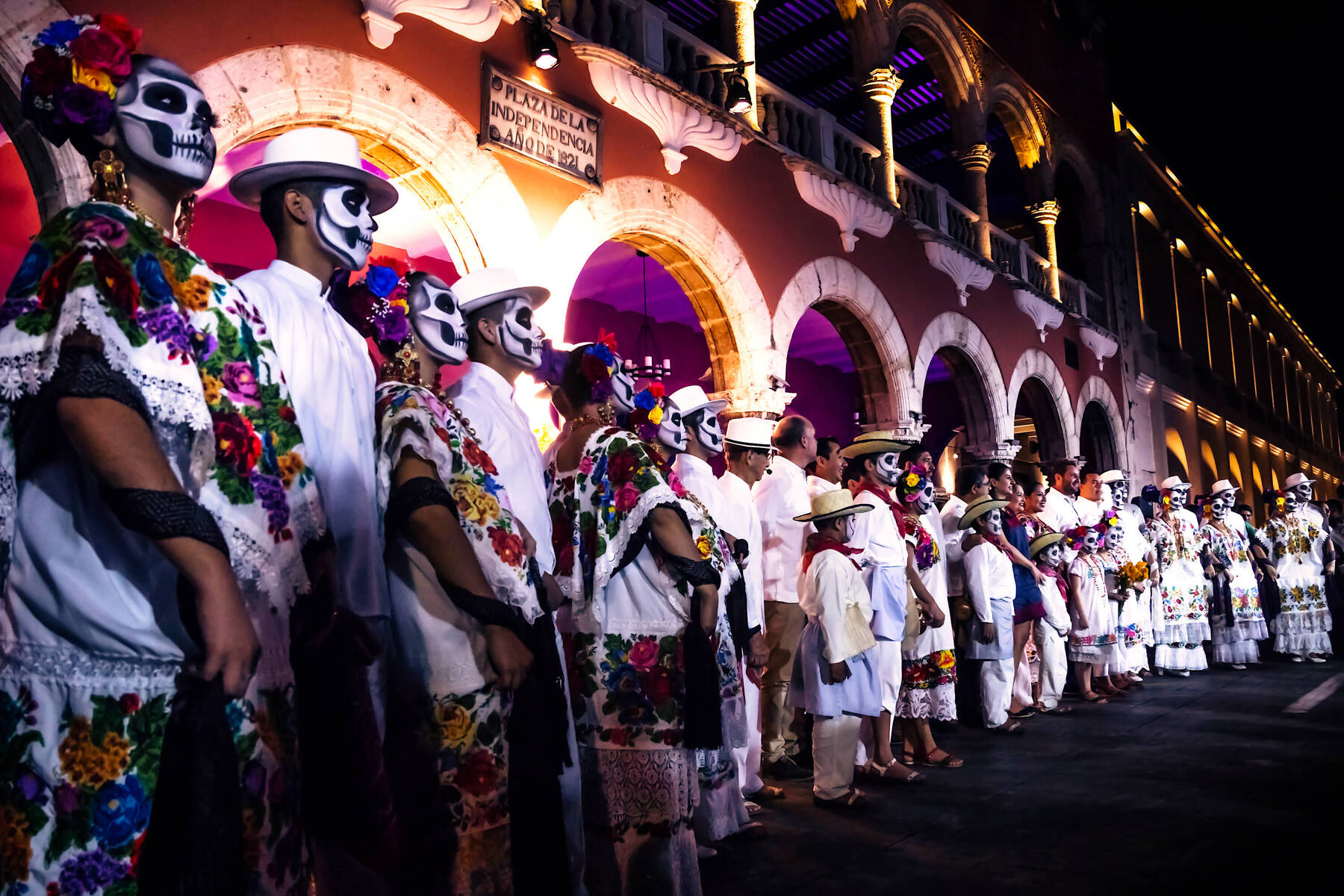 Sue has been passionate about travel and adventure ever since spending six weeks at an American summer camp and traversing the US by Greyhound bus afterwards. She has travelled or lived in over fifty countries and her favourite countries to date are the equally colourful and compelling India and Mexico. She has written for a wide range of travel magazines and websites and has just completed an in-depth app guide on her home city of Brighton, UK. Her next multi-month adventure includes a return trip to Mexico and also Cuba and Colombia.