Five Ways to Spend Your Day in Mexico City

Five Ways to Spend Your Day in Mexico City

Mexico City is influenced by its Aztec and Spanish past. See it in the architecture, food and culture with plenty of opportunities to learn the history of the country, as well as spending time like a local in this city of 21 million inhabitants.

The other highlight in Xochimilco is riding a local boat, trajinera, on Xochimilco Canals, a UNESCO World Heritage Site. On Sundays they’re jammed with boats as locals celebrate special occasions or just a day off, being punted down the tree or garden-lined, sun-dappled waterways to the sounds of mariachi bands or more modern music. 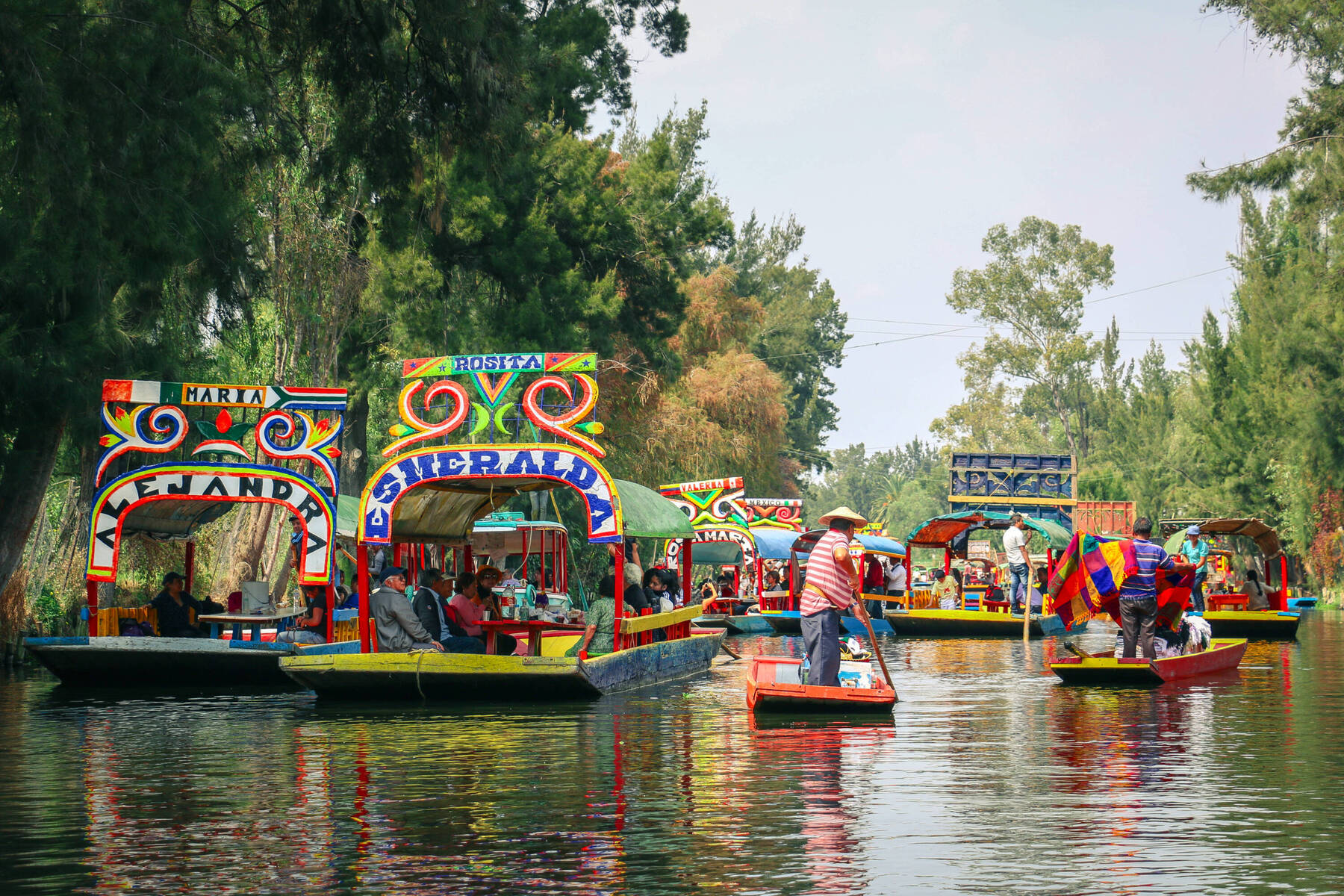 Escape the city within Bosque de Chapultepec’s leafy avenues. At 686 hectares it is the largest park in the Western Hemisphere. Pedal boat on the lake, visit the zoo, botanical gardens, and a number of museums including the National History Museum in Chapultepec Castle, built in 1725.

The museum gives an understanding behind what you will see if visiting Chichen Itza, Tulum, Palenque or any of the other ruins throughout Mexico. There can be queues to enter, especially on Sundays when residents visit for free. 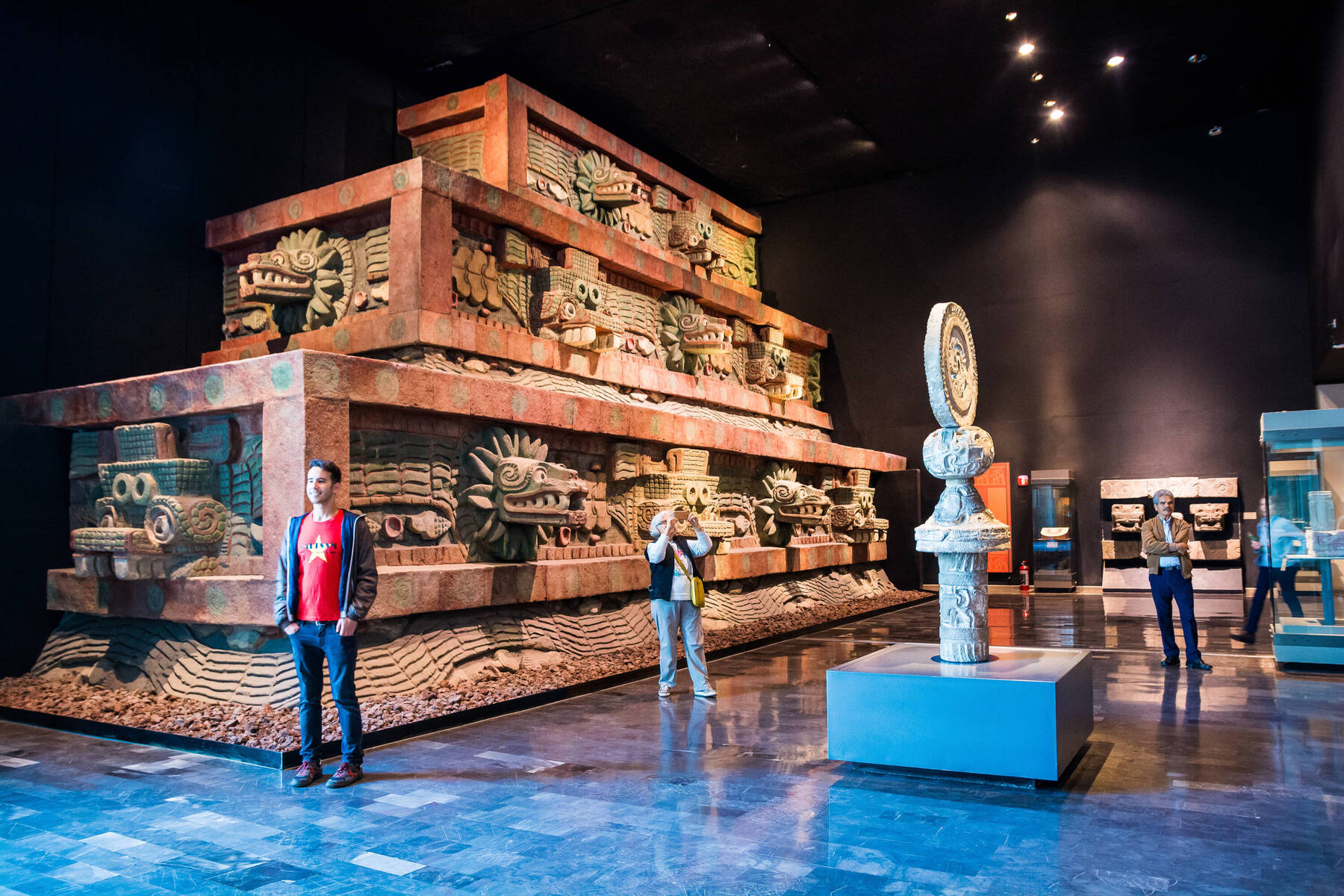 Even if you aren’t into art, time is well spent with a visit to Frida Kahlo’s vivid blue home which is now a museum. Don’t know anything about Frida? Frida Kahlo was considered one of Mexico's greatest artists who began painting mostly self-portraits after she was severely injured in a bus accident. Kahlo later became politically active and married fellow communist artist Diego Rivera in 1929.

Located in the neighbourhood of Coyoacan, the kitchen, studio, and bedroom of the vivid blue home appear as she left them, while her art decorates other rooms along with that of Diego Rivera, her husband. Also displayed is her clothing fashioned on traditional Tehuana dress, which hid her back brace, the result of a near-fatal accident, and polio stricken leg.

The Secretaría De Educación Pública (Ministry of Education), a 1600’s convent now housing offices in the historical centre of Mexico City, features over a hundred paintings by Rivera from the 1920s. It’s free to enter (photo identification required), just ask at the front desk to view the murals which decorate walls between doorways around the courtyards of the lower level and the upper-level cloisters. Depicting indigenous life, revolutionary scenes, political themes and more, Diego Rivera’s art gives another insight into Mexico’s history.

More of Rivera’s work, painted between 1929 and 1935, can be viewed at the Palacio Nacional (National Palace). Free to enter (photo ID required), this building, used by the government, has within its grounds museums on Aztec history and that of the National Palace, as well as gardens, courtyards and a chapel. 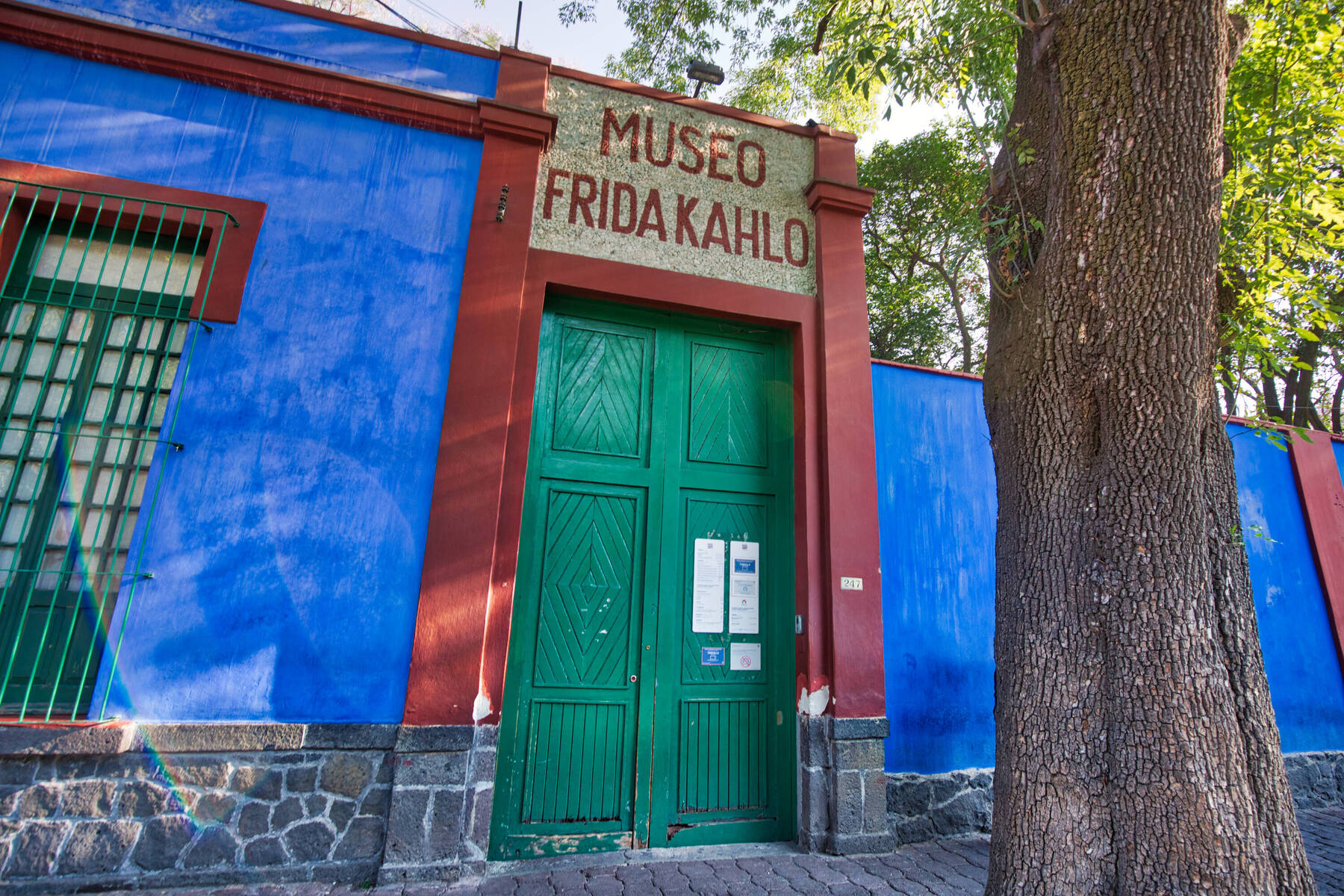 The National Palace flanks one side of the Zócalo, also known as Plaza de la Constitucion, where an immense Mexican flag flies. It bears the image of an eagle eating a snake. This was a vision, according to legend, had by the Aztec God, Huitzilopochtli. His people were to build a kingdom where they witnessed this scene. The flagpole marks that spot. Tenochtitlan, now Mexico City, was founded here. Adjacent to the palace is Metropolitan Cathedral, built between 1573 and 1813, tilted and sinking like much of central Mexico City due to it being built on lakes.

White smoke wafts across the area to the side of the Cathedral where indigenous people perform dances and cleansing ceremonies to the sound of drumming. Enjoy this fascinating sight on your way to Templo Mayor, the remains of Tenochtitlan’s main temple. Discovered in 1978, excavations continue on this site which was partially destroyed by the Spanish and built upon. Walkways allow visitors to wander amidst the 14th Century ruins of stone walls, past the main staircase still guarded by stone snakes and view statues and walls still bearing the colours they were once painted, albeit faded. The museum houses many of the artefacts discovered at the site while including information on the flora, fauna, agriculture and rituals of Aztec times. 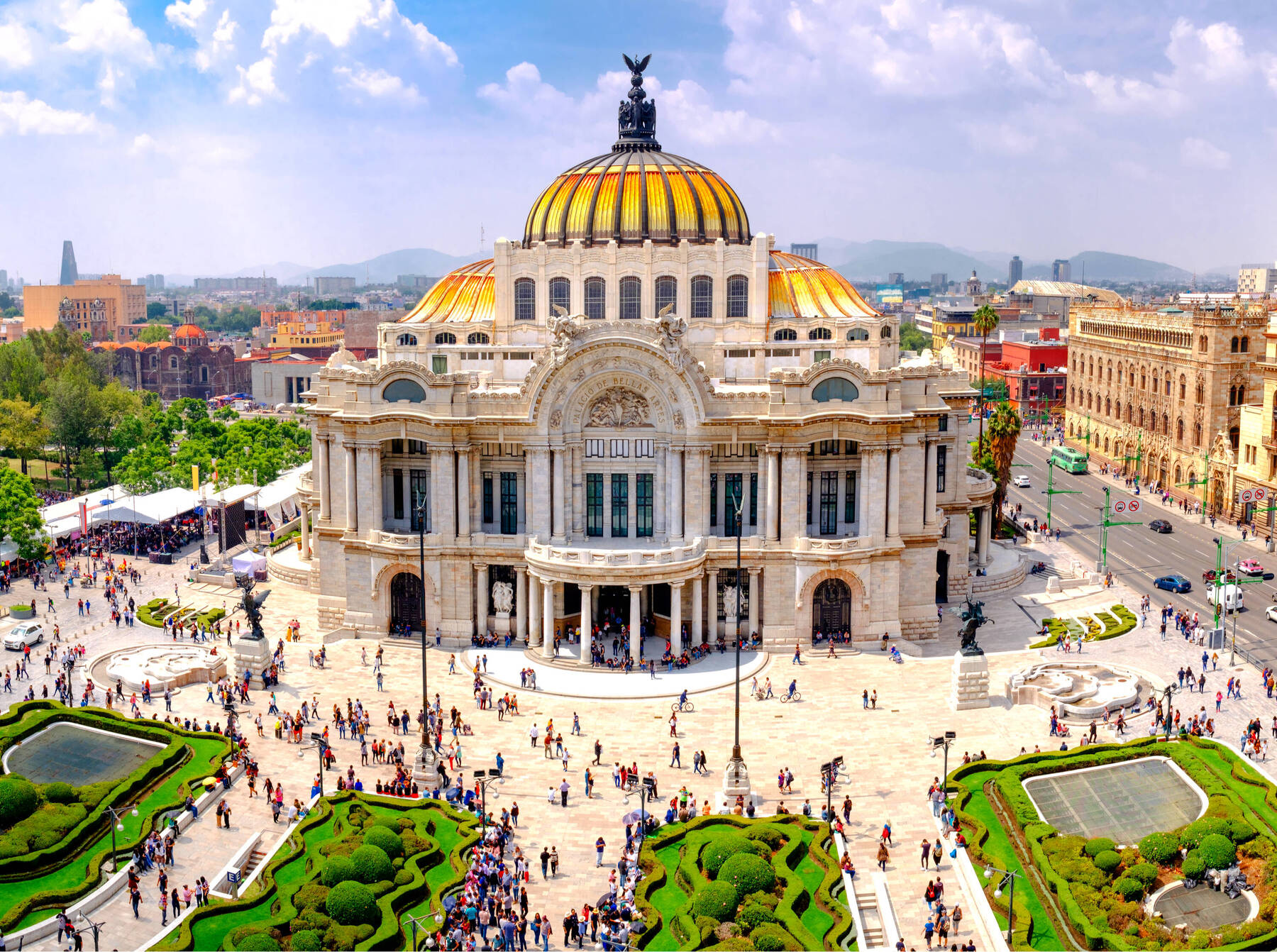 The Palace of Fine Arts

Construction of the Teotihuacan Pyramids is thought to have begun around 400BC. Approximately 47 kilometres from central Mexico City, this UNESCO World Heritage Site features several pyramids. The largest of these is the Temple of the Sun, with a height of 66 metres, and Temple of the Moon rising to 43 metres.

As Mexico City sits at an altitude of around 2000 metres, climbing the stairs of these two steep pyramids could induce a hammering heart. The Avenue of the Dead which lies between the two steep pyramids and apparently led to Tenochtitlan, is lined with temple and platforms ruins. Information boards explain their function.

A complex of basilicas and chapels, it’s one of the most visited religious sites in Latin America, an emotional sight for many. Take a tour to learn the legend behind the cloak bearing the image of the Virgin Mary displayed here. 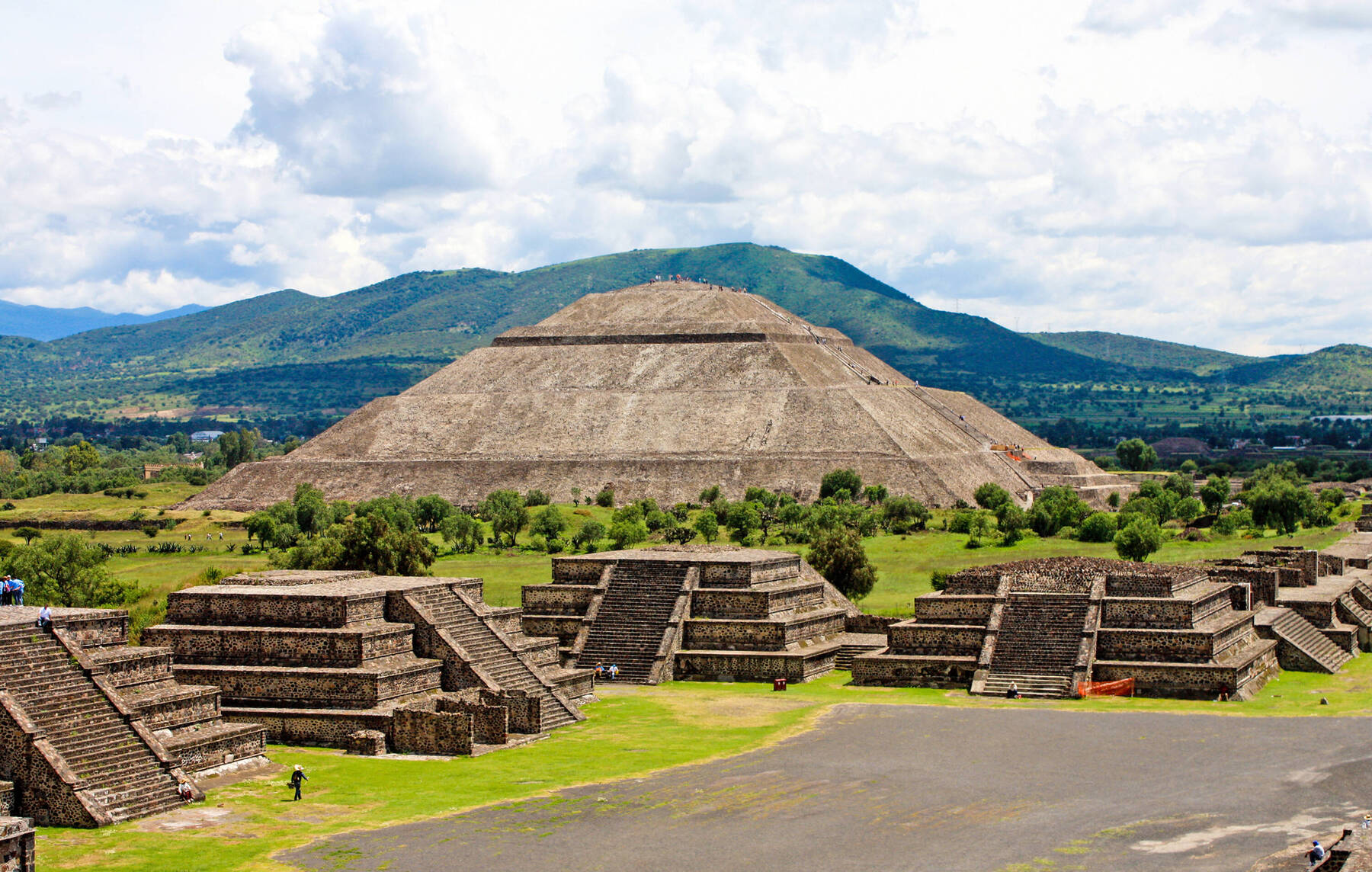