Portugal is famous for its surfer-friendly beaches and its historic villages and cities. And let’s not forget the food ranging from freshly grilled sardines and hearty sausages to sweet and delicious egg custard tarts called pastéis de nata. Mix in some bread, olives and wine and it’s a proper feast. Next to the typical dishes, there are many interesting places to discover in this strip of land wedged between Spain and the Atlantic Ocean. Some of them have serious bucket list potential like the areas that are marketed as international film locations by PIC Portugal (Portuguese Film Commission), founded in 2019.

This World Heritage site, located north of Porto, is sheltered by mountain ranges and offers an abundance of nature, history, culture, gastronomy and crafts. It’s best known for its world-famous port wine that is produced here, next to light Bordeaux-style as well as rich Burgundian-style wines. Get to the bottom of the long tradition of viticulture of this beautiful region that could be featured in a historical period drama.

Must-sleep: At the winery Quinta da Pacheca in the Douro Valley you can taste local wines and homemade olive oil and top off your stay by sleeping in one of their luxuriously converted wine barrels. Talking about an immersive experience … 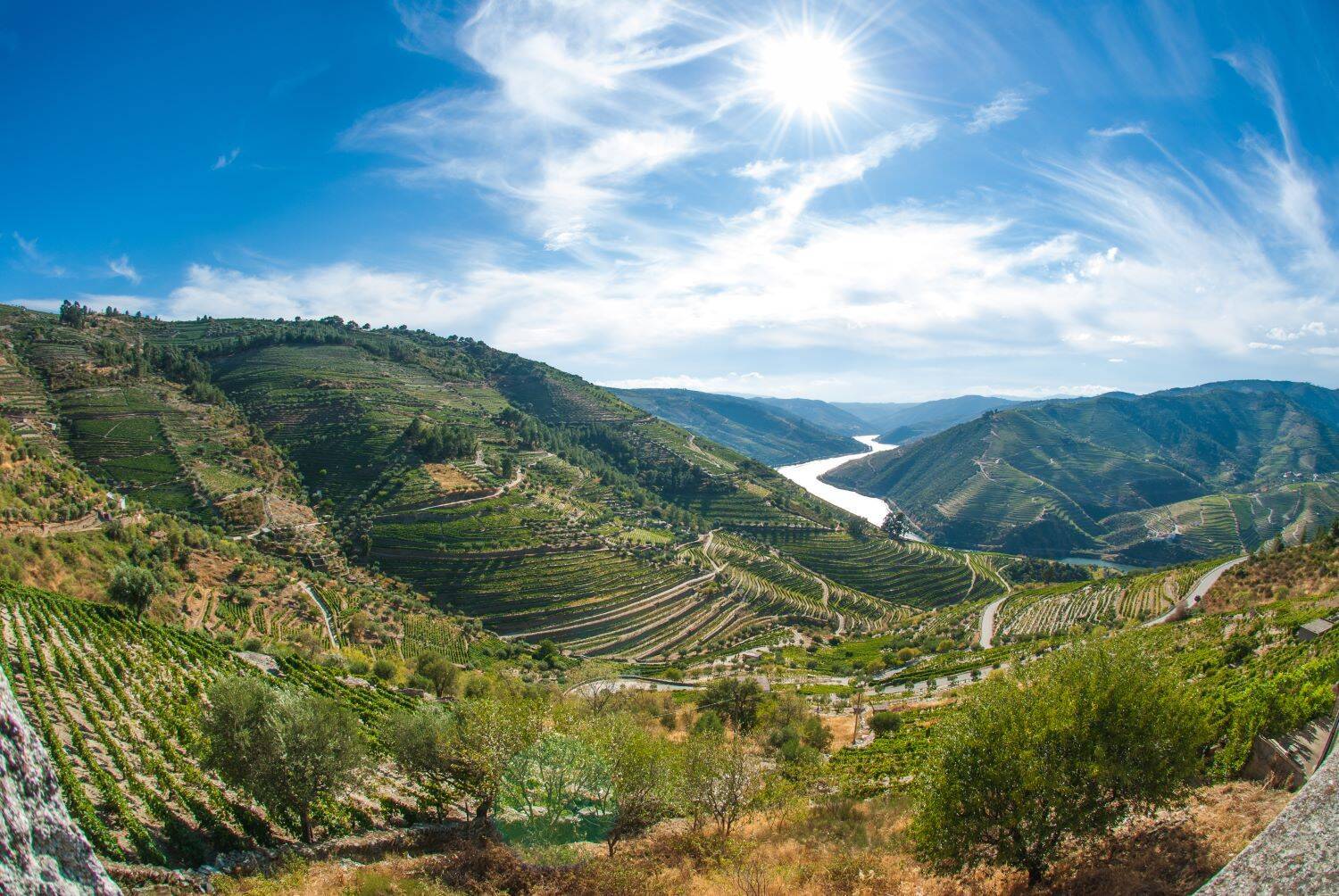 The movie Frankie with Marisa Tomei and Greg Kinnear was actually filmed in Sintra, a historic town with UNESCO World Heritage-listed centre, located about 25 km north-west of Lisbon. This popular town on the Portuguese Riviera is the perfect backdrop for movies as it’s adorned with fairy-tale palaces, historic estates and lush gardens. Due to the proximity to Lisbon you can easily plan a day trip to Sintra if you’re staying in the capital.

Must-see: Spend your day discovering the magical Monserrate Park with its striking neo-Gothic palace or get lost in the mystical Moorish Castle, a fortification overlooking the Sintra Hills offering incredible vistas. Every year in summer from June until the end of August the Sintra Festival takes place and offers a host of musical events, concerts and dance performances all around town. 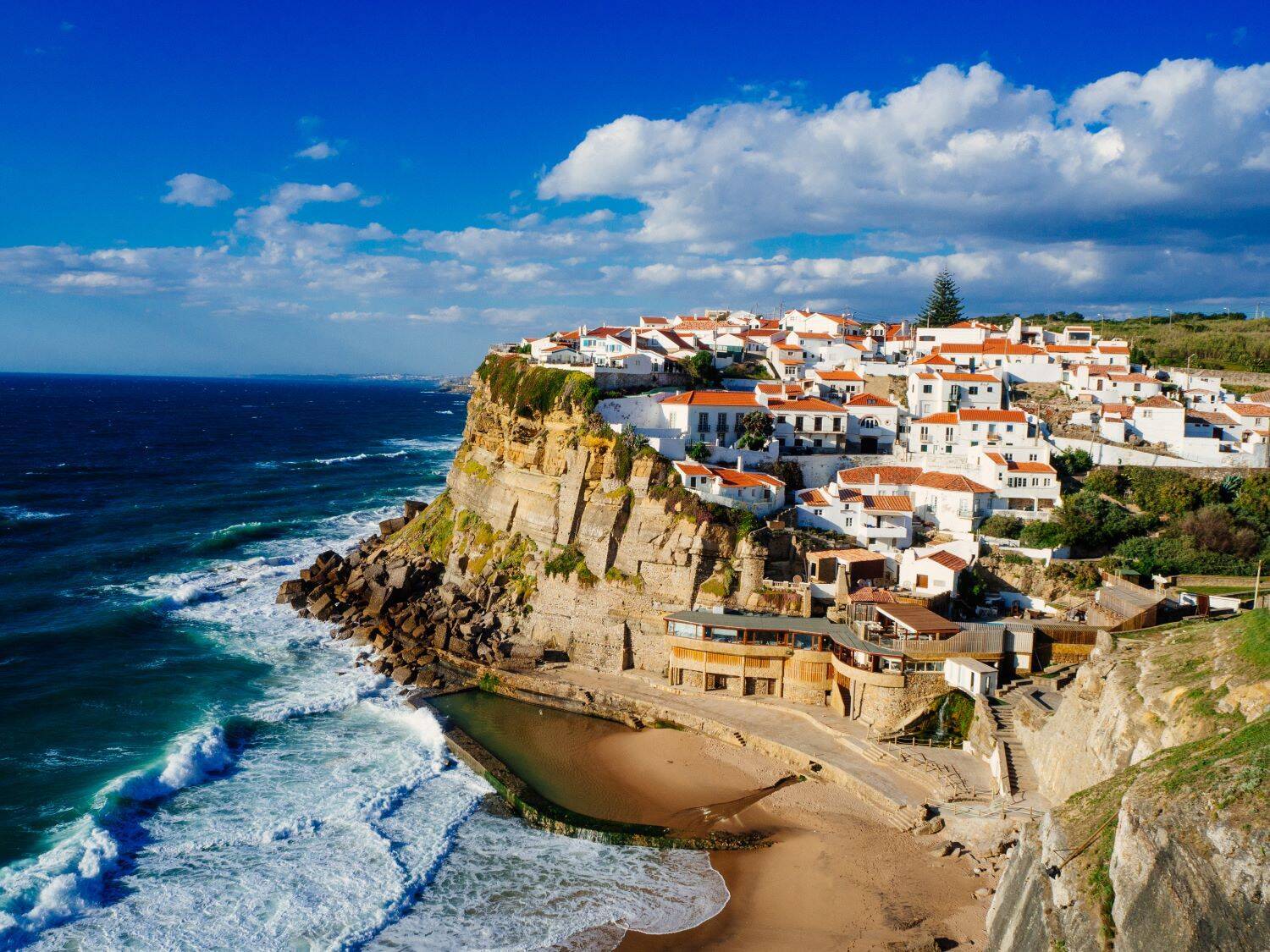 This neo-Gothic jewel was opened by the brothers Lello in 1906 as it is today, and it’s one of the oldest bookstores in Portugal. It has served as an inspiration for many authors, JK Rowling being one of them. The author of the Harry Potter series visited the bookstore when she taught English in Porto.

Over the years, this two-story building adorned with a large stained-glass window, its crimson staircase and busts of the most important Portuguese writers has served as a quiet place for readers as well as a spot for social gatherings.

Must-eat: After working up an appetite reading, you better take a little break and try the most decadent sandwich you’ve ever had, typical for Porto: the famous Francesinha, which translates to Little Frenchie. It consists of bread and layers of ham, sausage and steak and it’s covered with melted cheese, drowned in beer sauce and served with French fries. 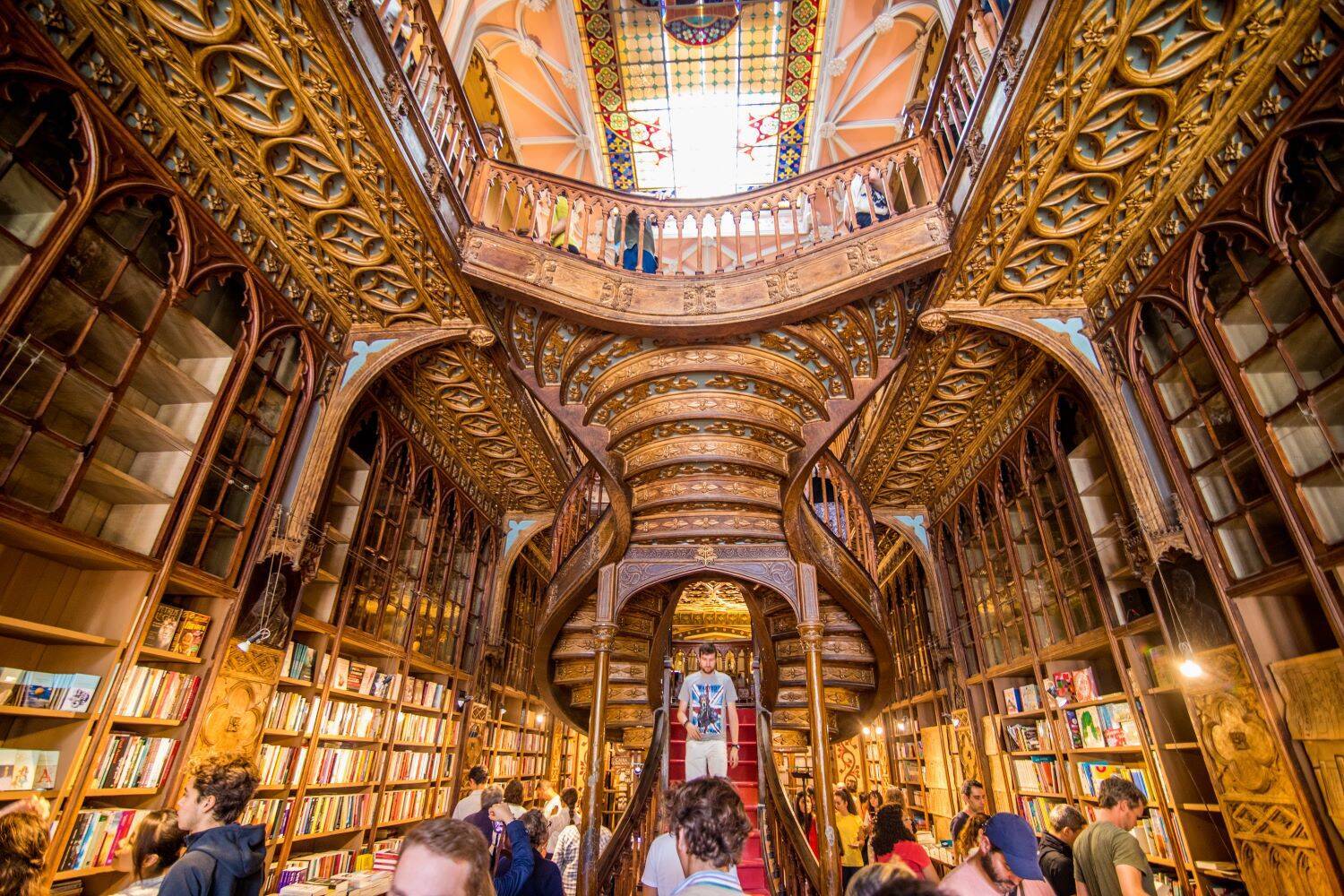 Odeceixe beach in the Algarve

Located at the upper western Algarve region you can reach this beach from the identically named village via a winding road that takes you through a lush green valley and cork-oak groves.

On the way to the coast you’ll pass white houses, which are typical for the region, nestled in the cliffs overlooking the scenic bay. Odeceixe beach is located at the mouth of the river Seixe, which flows into the sea at the back of the bay and creates a bathing area, which is especially popular with families.

Must-try: Rent a surfboard at the local surf school and paddle around in the water before relaxing at one of the little cosy beach restaurants. Watching the sunset, it doesn’t take much creativity to imagine a romantic scene being filmed at this very spot. 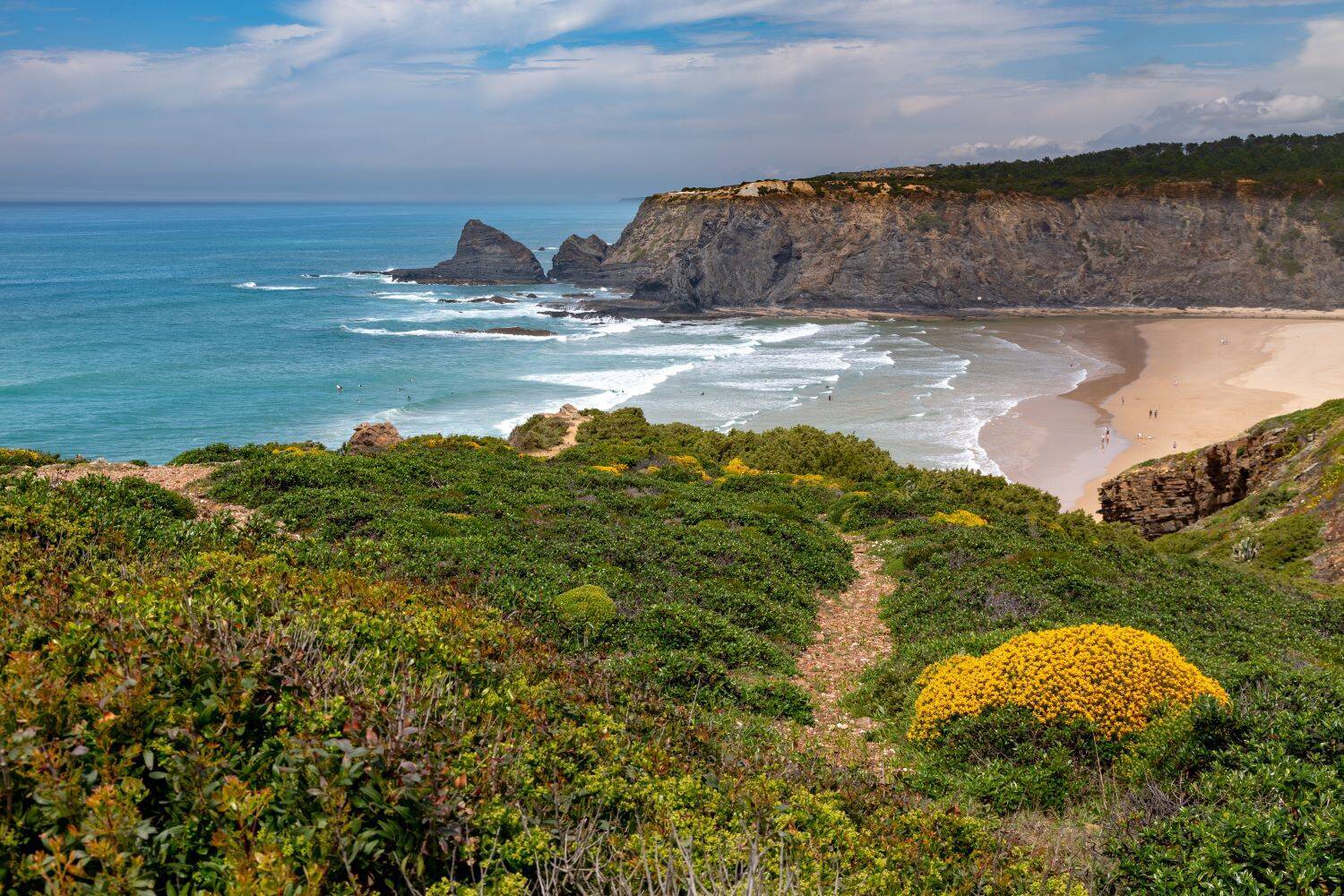 The small village of Piódão

This ‘Historical Village of Portugal’ is located in the centre of the country in the slope of Açor Mountain offering spectacular views. Reachable by narrow roads snaking through the mountainous terrain, the drive there is already breathtaking. Except for the white church, the village unanimously boasts typical schist houses with slate roofs and contrasting window shutters painted in deep blue, making it easy to imagine this place during times that have long passed. The tightly packed stone cottages sit isolated among steep terraces with a river gurgling below, where you can bathe during the summer months.

Must-do: Stay in one of the InXisto Lodges only a ten-minute-drive from the village, where you can enjoy modern interiors, panoramic views and maybe even the visit of a small fox due to the secluded location. 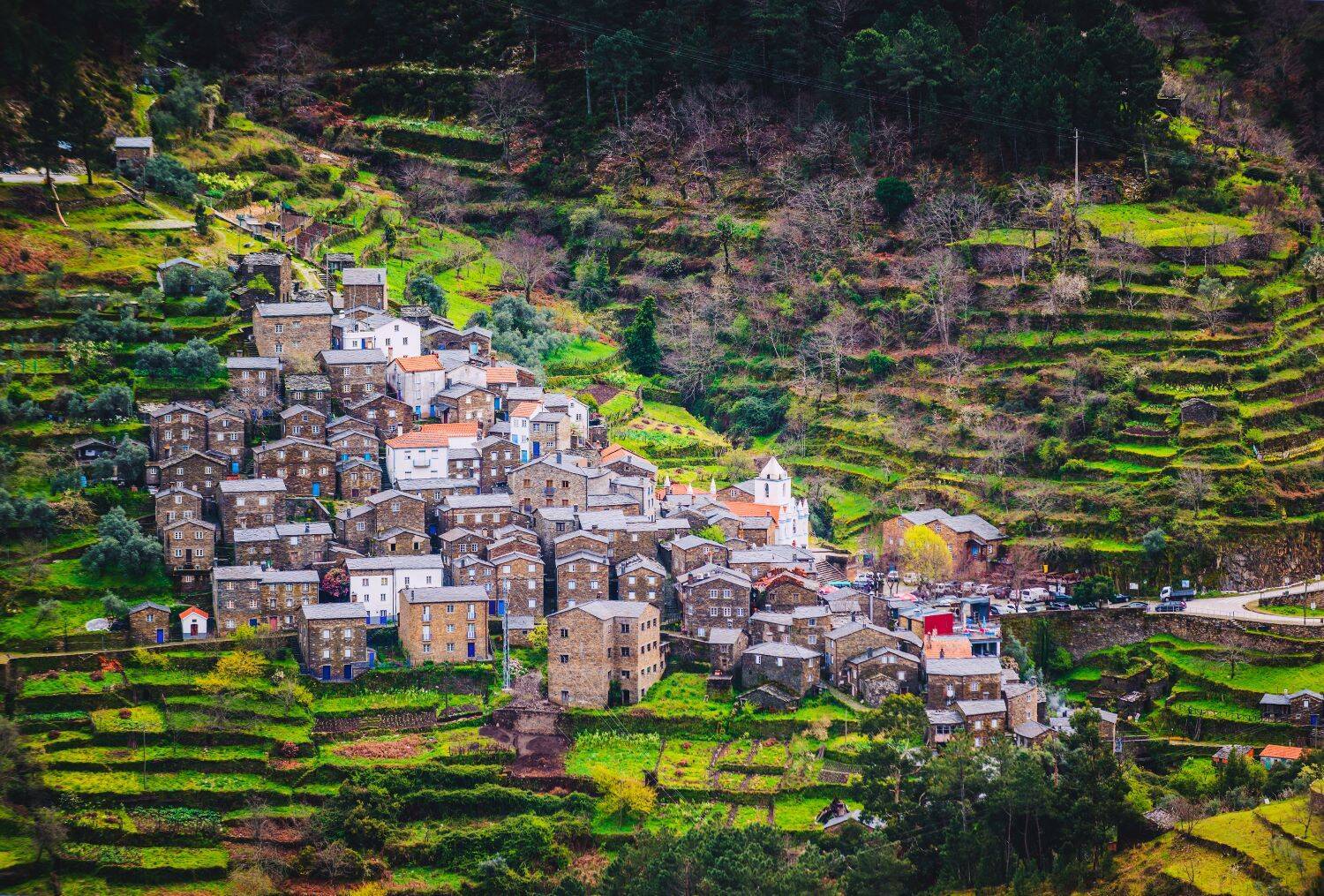