Ancient Sights of the Nazca Desert

Ancient Sights of the Nazca Desert

The dusty town of Nazca lies 400km south of Lima in the Nazca Desert, which in around 200BC – 600AD was the home of the ancient Nazca civilisation. Their pottery and textiles can be seen in museums (check out Museo Didáctico Antonini in Nazca) but the culture also left behind a legacy on the land. Discover pyramids, aqueducts and mysterious lines and shapes spread across the desert floor that will leave you bewildered as to how and why these strange shapes and structures exist.

The Nazca area only receives around 1-2cm of rain a year, so it's not surprising that the Nazca people needed a way to find water. One of their greatest achievements was the Cantalloc Aqueducts, an ancient underground water system still used by farmers today for watering crops. Built roughly 1,500 years ago, the series of spiralling holes around 15m apart, some 7m deep, are lined with rock and lead to underground tunnels. The puquois, or wells, look like giant plugholes in the earth and move the water to zig-zagged channels and onto a reservoir.

The aqueducts lie 4km south-east of Nazca township. Guided tours are worthwhile to bring more meaning to what you see but you’ll still come away wondering how the Nazca people knew where to find the underground water in the first place. 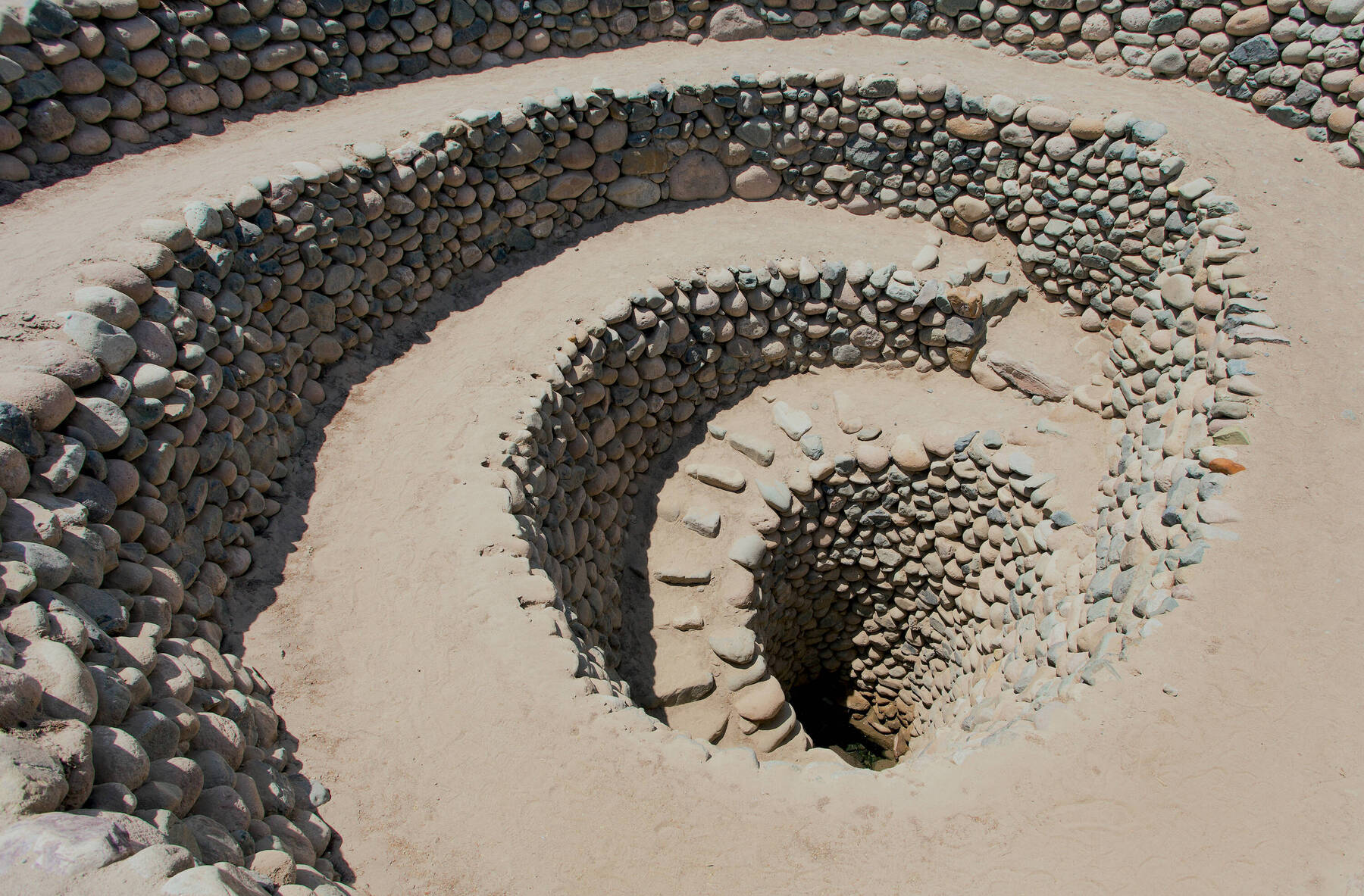 30km away from Nazca, where green valleys break the monotony of the brown desert, lie the Cahuachi Pyramids. Access is via a very rocky road off Ciudad Perdida Cahuachi and takes around 90 minutes from town to reach.

Built around 2000 years ago and once an important sacred site, the pyramids were abandoned around the fifth or sixth century AD. Excavations started over 25 years ago and continue to this day on the ceremonial site which is around 150 hectares in size. Three pyramids have been excavated. They appear to be made up of dirt mounds with mud bricks forming the walls, terraces and steps.

Possibly linked to the Nazca Lines, with some of these pointing to the pyramids, you’re likely to have the site to yourself. Guides are recommended as it’s difficult to find alone and of course, they can give a lot of fascinating information on the site that you wouldn't get without them due to the lack of information boards. It can be extremely hot with little shade, so take lots of water.

In the distance you should be able to catch a glimpse of the white Cerro Blanco, the highest known sand dune in the world at 2078m above sea level can be seen. 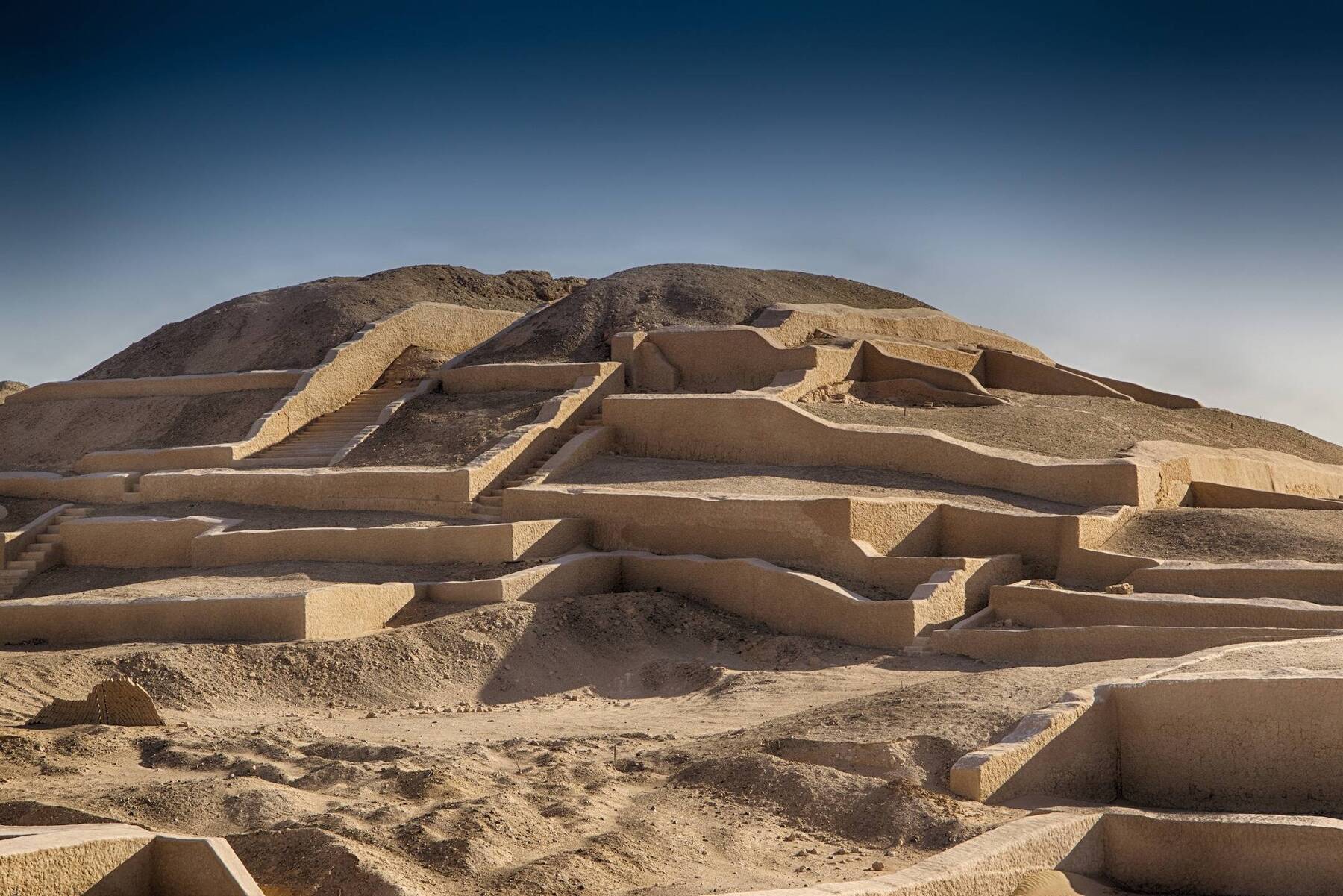 Buried here around 1000AD, the dry environment and the resin the bodies were painted with has helped preserve them. The bodies sit with knees drawn up and you can catch glimpses of leathery brown skin beneath burial cloths which still retain a little colour. They’re surrounded by pottery, items needed in the afterlife for preparing meals. Headbands still remain around the mummies’ foreheads holding black, long, matted hair in place.

This area doesn't usually have an abundance of tourists, so prepare for some creepy vibes if you're there on your own! 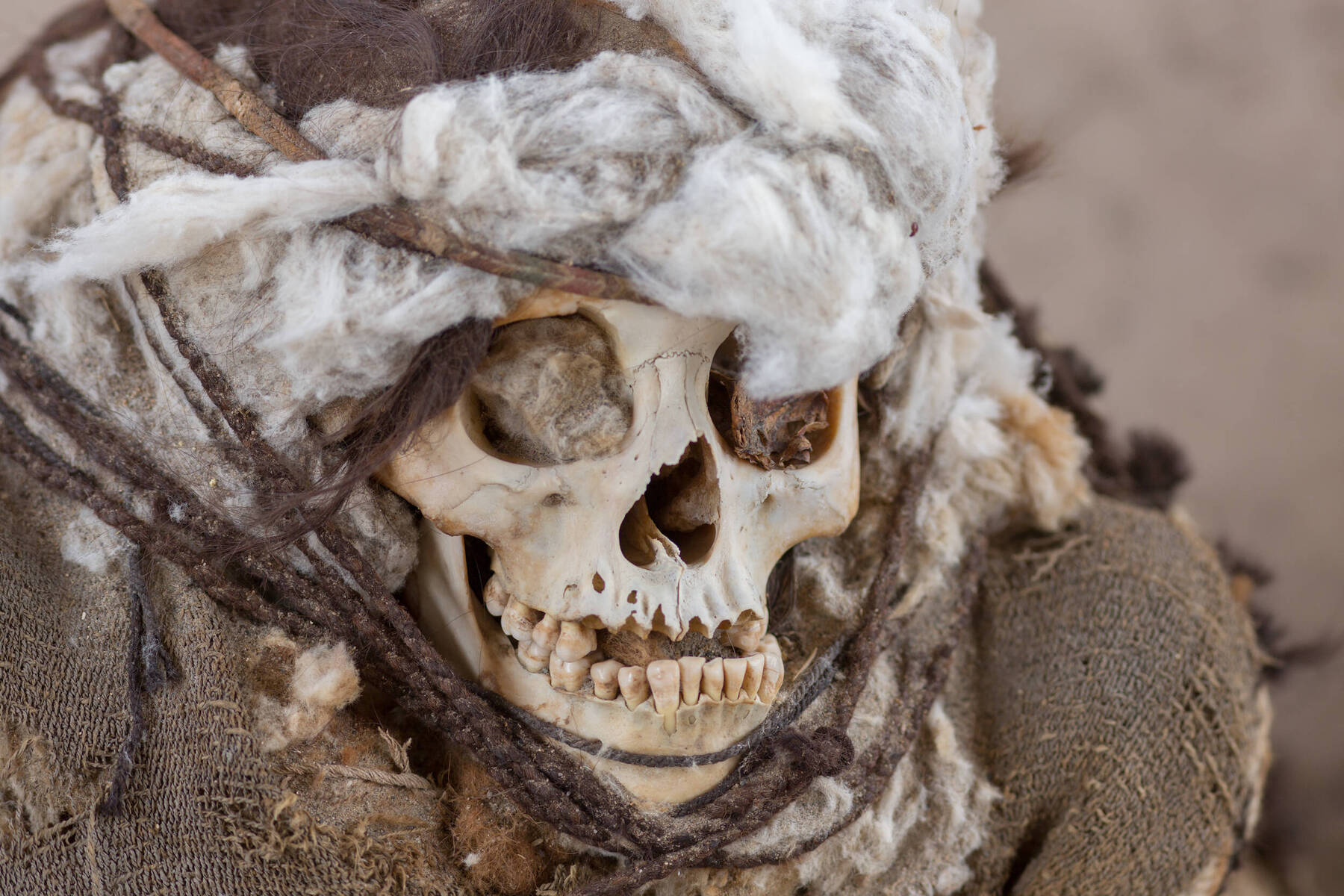 The reasons behind the Nazca Lines remain a mystery to this day. Why were they drawn?

Maria Reiche is a German-born Peruvian archaeologist who devoted much of her life to studying them and earned the nickname 'Lady of the Lines'. She believed the lines and shapes were astronomical calendars or depictions of constellations. She was instrumental in having them protected in 1978 and in 1994 when the area became a World Heritage Site. Discovered in the 1930s after pilots spotted lines, rectangles and triangles drawn across the desert, further investigations have found around seventy animal and other shapes – one which resembles an astronaut. Known as geoglyphs (designs created by moving stones or earth on a landscape), the Nazca Lines have been studied by many. There are suggestions that they were drawn by aliens – the lines being runways for spacecraft, or used as directions for primitive forms of hot air balloons. By dating pottery left nearby the sites, it is thought they were created somewhere between AD445 - AD605. The lines can be viewed from the ground or air. Both are highly recommended.

Approximately 25km north of Nazca on the side of the Pan American Highway stands a metal viewing tower. For a small cost, tourists can climb the 18m El Mirador and view the outline of two hands and a many-branched tree. Several tour companies fly over the lines leaving from Maria Reiche Airport in Nazca. Planes are normally six or eight-seater Cessna which can leave passengers feeling a little queasy on the thirty-minute flight, however, no matter what side of the plane you sit on, you will see the many lines and geometrical shapes spread across the brown desert. The scale is staggering, one triangle is measured at 3km long. Pilots circle a number of shapes etched in the stone surface such as a whale measuring 65m in length, a 93m-long hummingbird, a 135m condor, a monkey, a spider, and the astronaut.

It’s difficult to take photos due to the continual movement, so it’s best just to enjoy the sight of these precisely drawn figures. You’ll be left perplexed, still asking the questions that no one has been able to answer. Why? How? 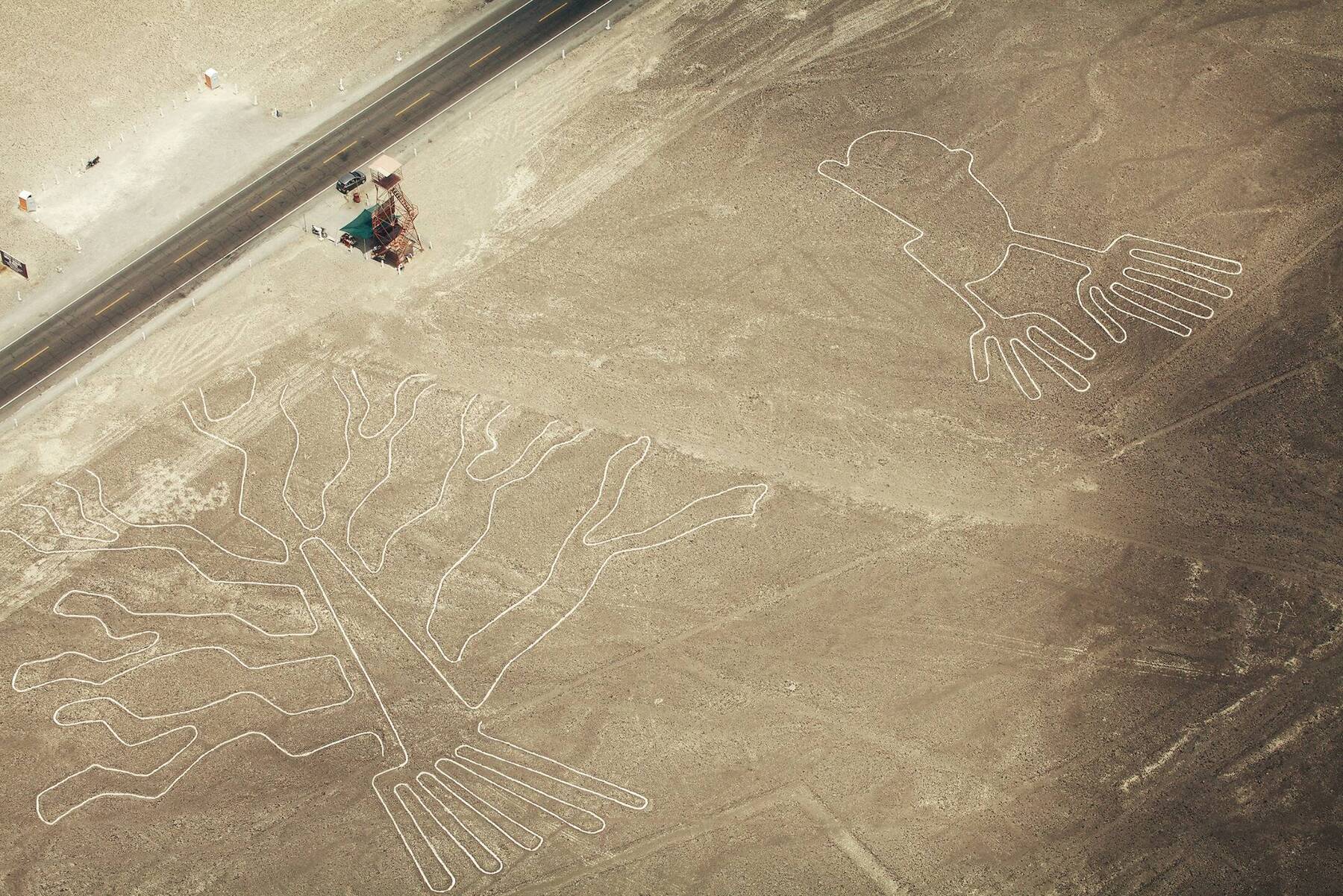