The Best Walks on the Wales Coast Path

The Best Walks on the Wales Coast Path

The Welsh coast will take you past castles, quaint coastal villages, world-class beaches with secret coves, and woodland. This is your chance to see the flora and fauna of Wales at their most natural, including spectacular marine life sightings such as dolphins, porpoises, and seals in their habitats. Some of the best bird-watching experiences in the UK can be enjoyed here — including an island of puffins — giving you ample reason to take your time on your journey and enjoy many of the quaint inns, hotels, or campsites along the way. In 2012, the Wales Coastal Path officially made Wales the only country in the world to feature a continuously-marked path along its 870 miles of unspoiled coastline. These coastal paths have been walked by pilgrims and classic writers for thousands of years; paths that are as much about their history as their spectacular views. The beauty of enjoying this hike is that you can enjoy as much or little as you like, spending days to months enjoying the sea air and rugged pathways. In May, walkers in Wales can even meet like-minded people and join free guided tours and activities during the annual Ramblers Wales Coast Path Walking Festival which is not to be missed. Here are some of the best places to take a hike along the Wales Coastal Path and what you’ll see along the way.

Carmarthenshire Bay and the Gower Peninsula

We often gravitate towards the cities of South Wales but missing out on the award-winning beaches of the Gower Peninsula would be a crime. It also makes for a great starting point as you make your way north. The Gower Coast path stretches 43-miles and has been voted one of the UK’s best walks, with Rhossili, Three Cliffs and Oxwich bay being standout stretches and Gower being the UK’s first designated Area of Outstanding Natural Beauty. The Welsh writer Dylan Thomas lived in the village of Laugharne for over two decades, making the walk to his home something of a literary pilgrimage for those who love his work. Cliffside pubs, castles, and spectacular views are guaranteed on this magnificent hike. Don’t miss the colourful fishing village of Mumbles where you can try local favourite Joe’s Ice-cream. 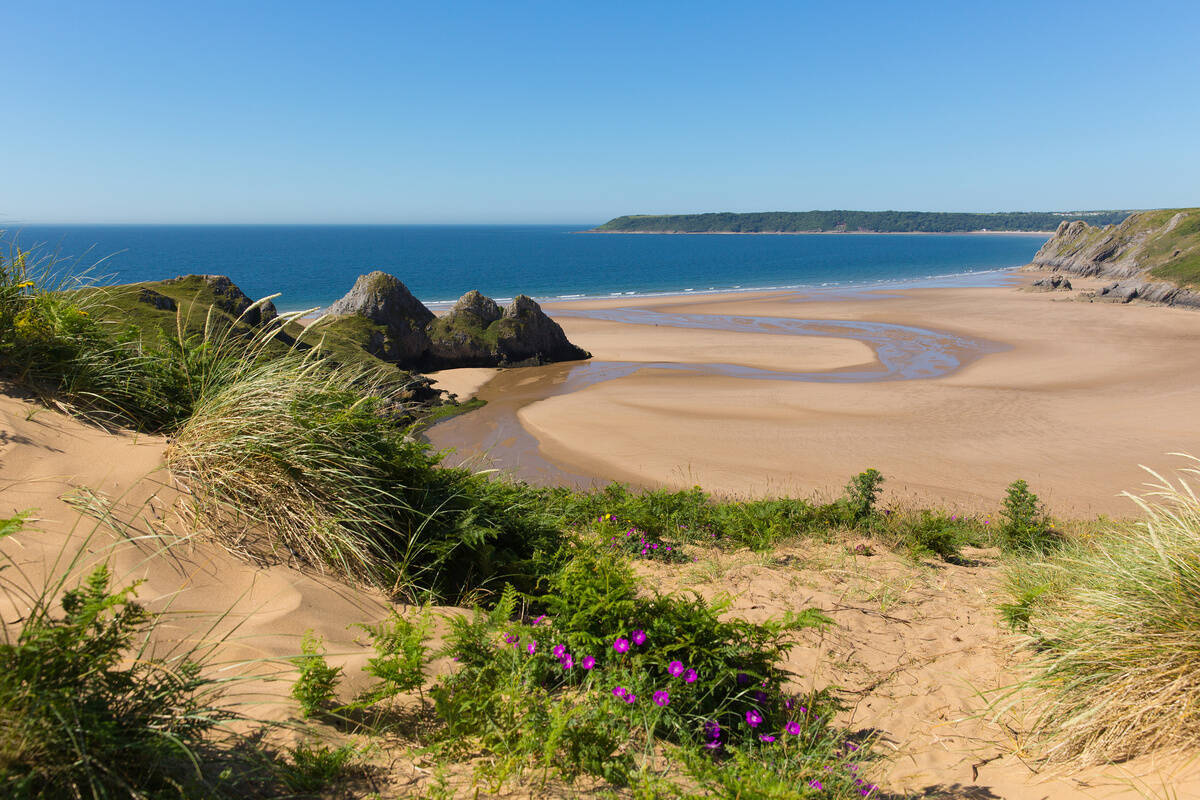 This part of the journey will take you along the incredible National Trail, which follows the Pembrokeshire Coast Path and has been designated a national park since 1952. Your hike will take you through fifty-eight beaches, fourteen harbours, and the UK’s smallest city: St David’s. This tiny city is a treat for history and architecture lovers; the spectacularly gothic St Davids Cathedral and St Davids Bishop’s Palace both dominate the horizon. Numerous films have been shot along the beaches here and, when an epic battle on horseback needs to take place, this area is often the first port of call. A particularly dynamic stretch; cliffs melt into woodland and back out to golden sand at a moment’s notice. During the summer, buses continuously run along the path to take you to your next guesthouse as the sun sets, or for a meal of seafood in one of the coastline’s many special restaurants. 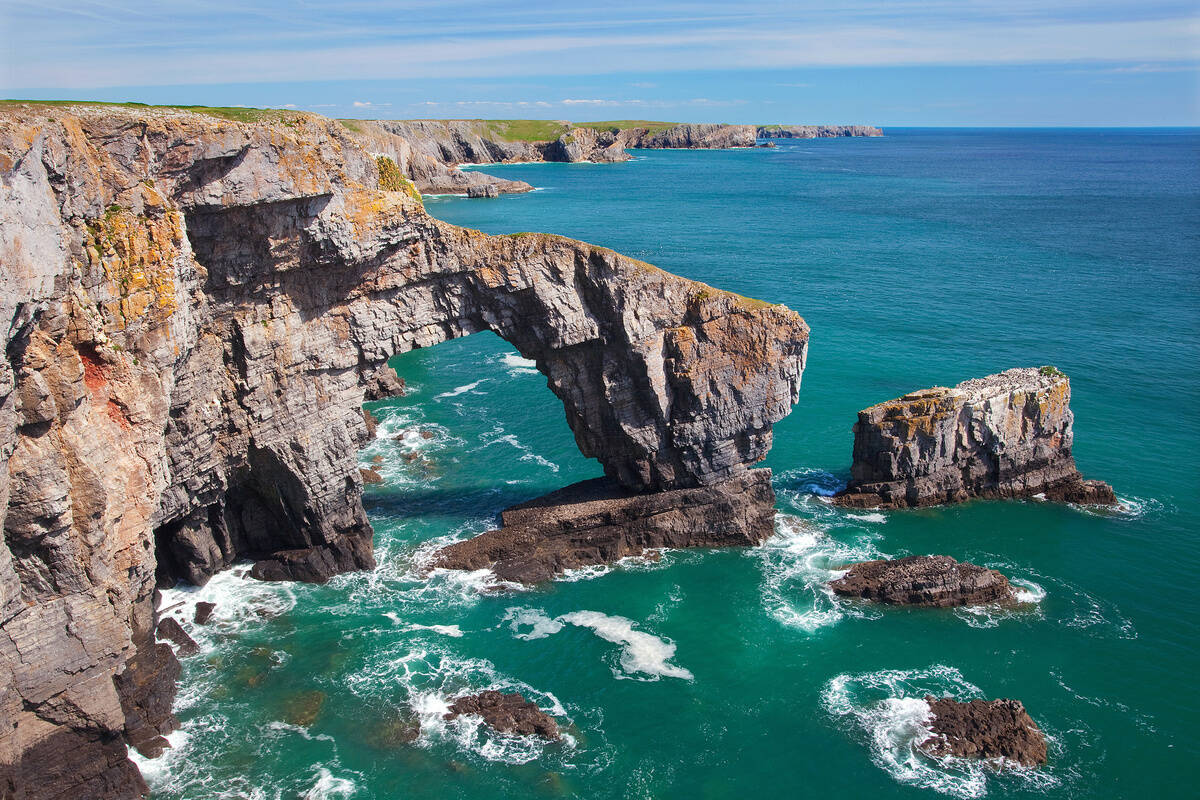 Often overshadowed by other beauty spots in the UK, the Llŷn Peninsula is an underrated area with outstanding rewards for hikers. These rewards include three of the UK’s most well-preserved coastal castles: Harlech, Caernarfon, and Criccieth, as well as the romantic Italianate resort of Portmeirion. The walks here are wild and dramatic, surrounding the mountainous Snowdonia National Park, stretching out towards Ireland, and dotted with fishing villages, farmland, and coastal cities. Views of the mountain Cadair Idris and the Mawddach Estuary will stay with you long after you finish your trip. The Llŷn Coastal Bus helps make the 100-mile path accessible for those who want to see as much of this inspiring area as possible.

The 130-mile coastline of historic Anglesey falls almost entirely within a designated Area of Outstanding Beauty and takes you across cliffs, dunes, marshland, coastal villages, farmland, and woodland. The island is famous for its standing stones, ancient burial grounds, medieval churches, and World Heritage-listed castles. The highest point of the hike takes you to the peak of Holyhead Mountain, keep an eye out for fluffy wild Welsh ponies as you go. Other stand-out areas include the breathtaking Southstack Lighthouse, built on the summit of a small island and the sea arches at Bwa Gwyn. From the Isle of Anglesey, you can also take the ferry over to Puffin Island, the largest bird colony in the British Isles. Puffin Island is home to 750-species of birds and the ruins of a 12th-century monastery. Two weeks would be an idea timeframe in order to fully enjoy this section of the coastal path. 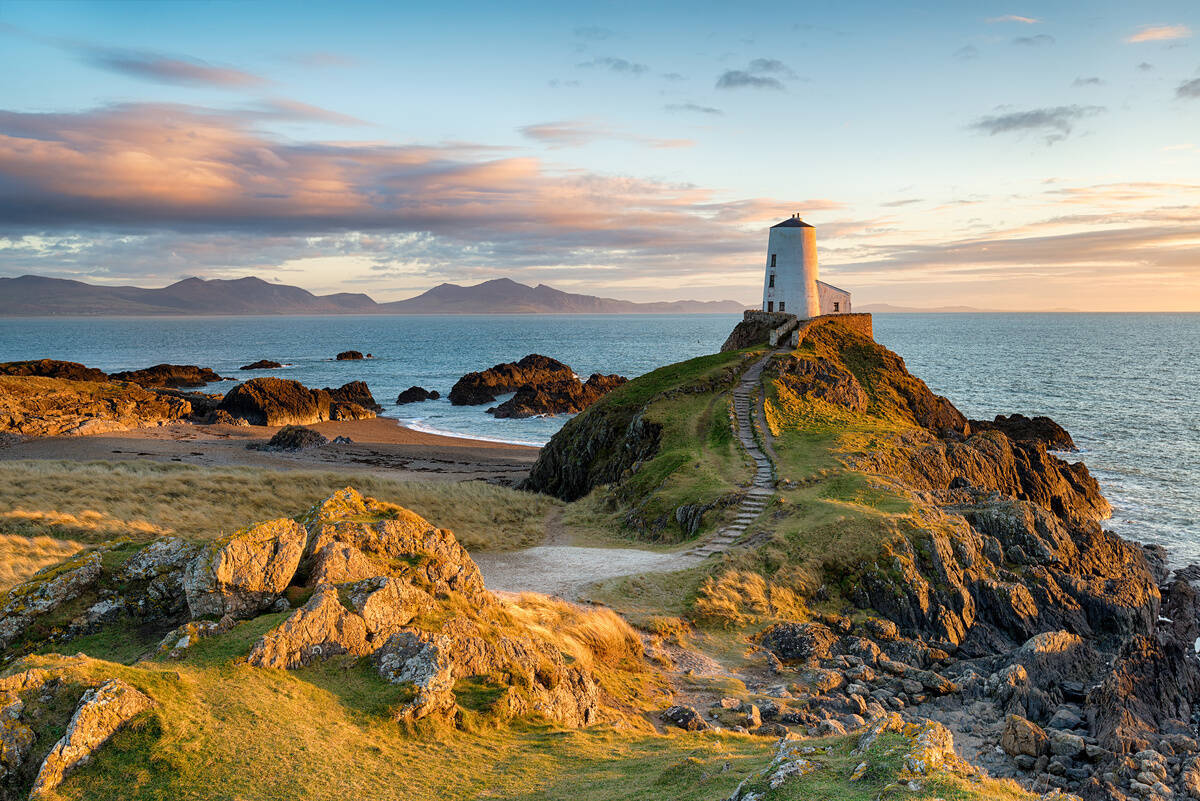 Jessica is a full-time freelance travel writer and content strategist from the UK. She's contributed to various publications including Fodor's Travel, Matador, The Culture Trip, and TripSavvy. She has a Master Degree in English from the University of Exeter and is also a qualified teacher. Jessica splits her time between East Asia and Europe and has travelled extensively within those regions.