Tech-Driven Sustainable Airports of the Future

Tech-Driven Sustainable Airports of the Future

Gone are the days when airport check-in queues stretched for miles, or when you had to wait for a shuttle bus to transport you to your rental vehicle. The airports of the future are infused with biometric AI driven check-in desks, luxurious lounges, self-driving prompt car delivery and no long-haul journeys on foot to the departure gate! Here are a few of the inspirational architectural designs, features and benefits of the airports of the future.

One of the heralded smart airports of the future, Qatar Hamad International is so vast it could cover two-thirds of Doha city. The second phase of the airport, which is currently in construction, was commissioned to adapt to the number of travellers arriving in Qatar for the 2022 FIFA World Cup.

This smart airport allows for seamless check-in. Travellers can scan their passports, choose seats on flights, print luggage labels then drop off their cases for processing, all in a matter of minutes all via self-service terminals.

Biometric Identification will be second nature, with retina scans and facial recognition, QR codes and stealth security screening. In most instances, you will have been vetted, authenticated and cleared for travel even before you even arrive at the airport. In fact, the installation of e-Gates in Qatar Hamad International can identify the exact passenger taking a trip a day before they are scheduled to board the aircraft.

Sustainability and advanced technology play a major part at Qatar Hamad International Airport too. Sensors are positioned around the terminal building to monitor heating and cooling based on the level of passengers, a treatment plant recycles waste water on-site, and the undulating stainless steel roof was designed with a tint to prevent sun glare and conserve energy.

By 2022, Hamad International Airport will be capable of handling over 50 million passengers per annum, over 300,000 aircraft will arrive and depart and over 2 million tonnes of cargo will be sorted at this Middle Eastern smart airport hub. 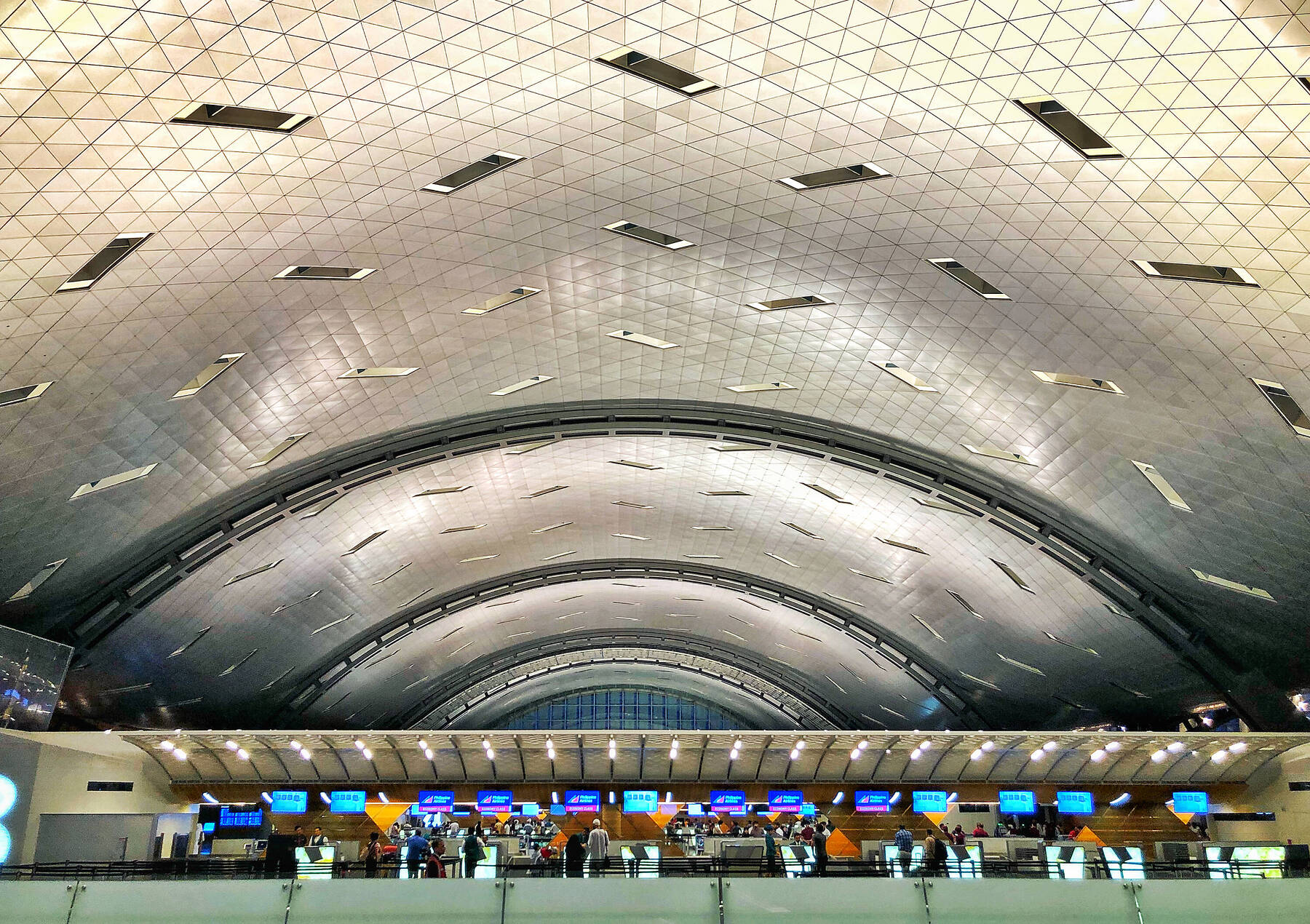 Beijing Daxing International Airport designed by Zaha Hadid Architects, along with French planners ADP Ingenierie and Beijing Institute of Architectural Design is located 46 kilometres south of Beijing city. The airport took a massive $17 billion investment to bring to fruition, up to 40,000 workers and 4.5 years to complete, and it is estimated that by 2025, 72 million passengers will pass through the airport each year.

The terminal building, built in the shape of a 6-arm starfish with domes atop, is geometrically precise to the mathematical formula – a space where everything meets at a central unifying space within the terminal building. It has been built to sustain itself, so that in years to come, elements can be redefined without altering the main framework of the building.

The airport contains several mezzanine floors with bars, restaurants and retail, and from the central section of the building, any departure gate can be reached on foot in just 8-9 minutes, taking away the need for shuttle buses, trains and monorails.

QR codes, ID and tickets are things of the past, with airport staff relying on facial recognition for passengers to check-in luggage, clear security and board the aircraft. A paperless luggage tracking service is available when you apply reusable RFID tags to your baggage and if you log flight details onto the airline app prior to dropping off, luggage can be tracked throughout the duration of its journey.

When fully operational, this airport will restructure the flow of passengers with the help of over 9000+ sensors, turning it into a digital smart airport which transmits huge amounts of precise real-time data for monitoring.

Smart AI robots will patrol the airport, working alongside human employees, constantly machine learning as they progress. The robots are being currently trialled to help drivers park and collect their cars, reducing the average parking time to approximately 2 minutes. The robots can apparently track unauthorised people in the airports too, flagging a warning to remove them with immediate effect, creating a safer space for all. 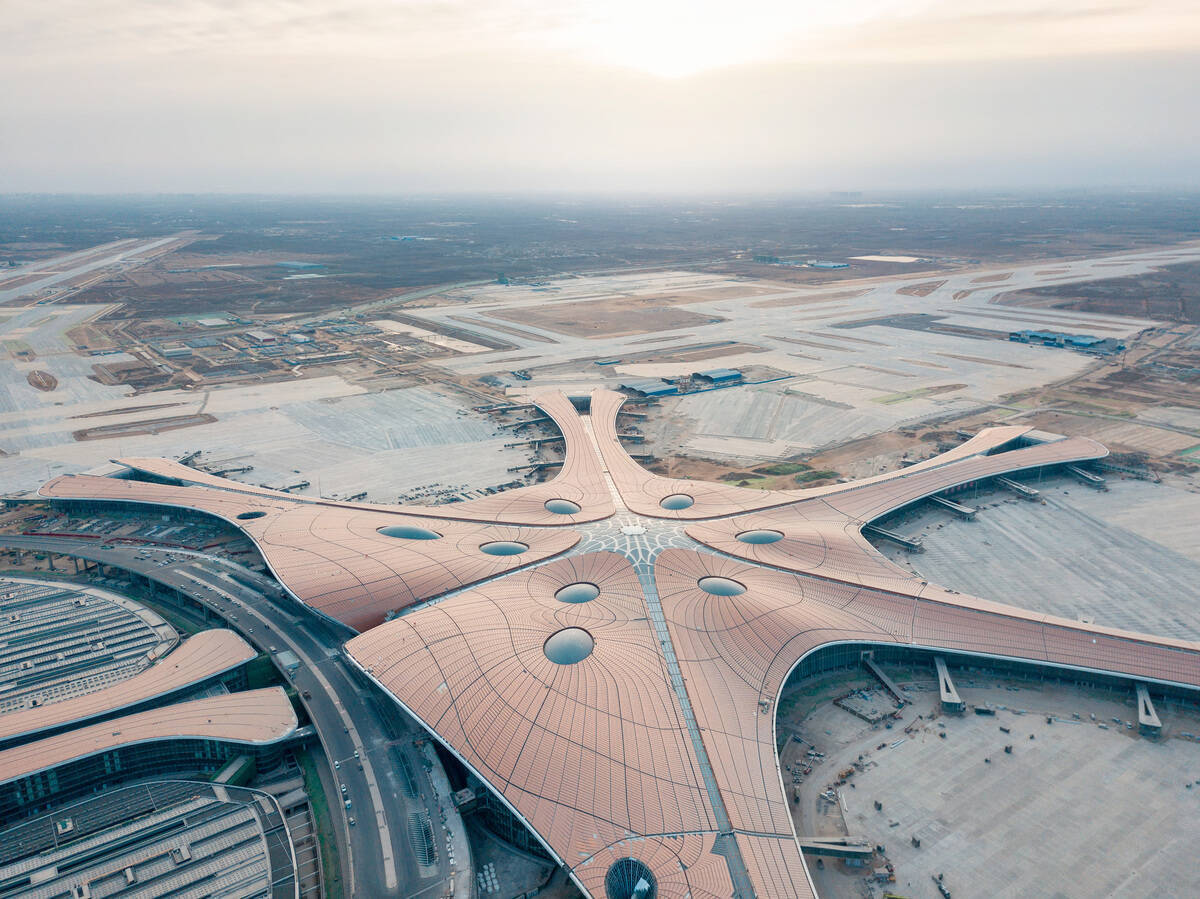 Singapore Changi is located approximately 20 kilometres north-east of the centre of Singapore. This, a major aviation hub in south-east Asia, has been named the “Best Airport in the World”, has won over 620 awards since opening and is known to be the only 5-star airport. The airport has been in existence for many years; however, recent terminal additions and billions of dollars in investment have transformed Changi into one of the most sustainable airports in the world.

From the country that gave us Gardens by the Bay, it’s unsurprising that Singapore Changi Airport turns its focus to sustainability. In Jewel Changi – a nature themed retail and entertainment complex inside the airport, there’s a 40 metre high Rain Vortex, a Green Wall with climbing plants and the world’s tallest indoor waterfall.

Built to combine a marketplace and indoor park, the five-storey-high vertical garden is a focal point of the airport. It spans 300m, but don’t be fooled, it doesn’t just look pretty, it also helps to regulate the internal temperature of the terminal building! There are 10 stories to explore, with attractions such as Sheiseido Forest Valley, Changi Experience Studio and Canopy Park with a bridge, maze and food and beverage outlets.

As with other forward-thinking airports of the future, biometric technology is heavily featured, offering fast and seamless travel - implemented to reduce manpower and increase efficiency.

In 2017, Changi introduced clean energy electric baggage tractors to help reduce emissions. Engineers also realised they can collect condensate water and use it to irrigate plants, before recycling and storing it to compensate for water loss through evaporation or leakages. The airport also introduced a food waste digester system designed to convert food waste from F&B outlets into liquid using microbes. Today, these systems process over 1,100kgs of food waste, thus, reducing the airport's environmental footprint.

That’s just Terminal 4. Another terminal will be completed around 2030 bringing many more advancements to this innovative Asian airport. 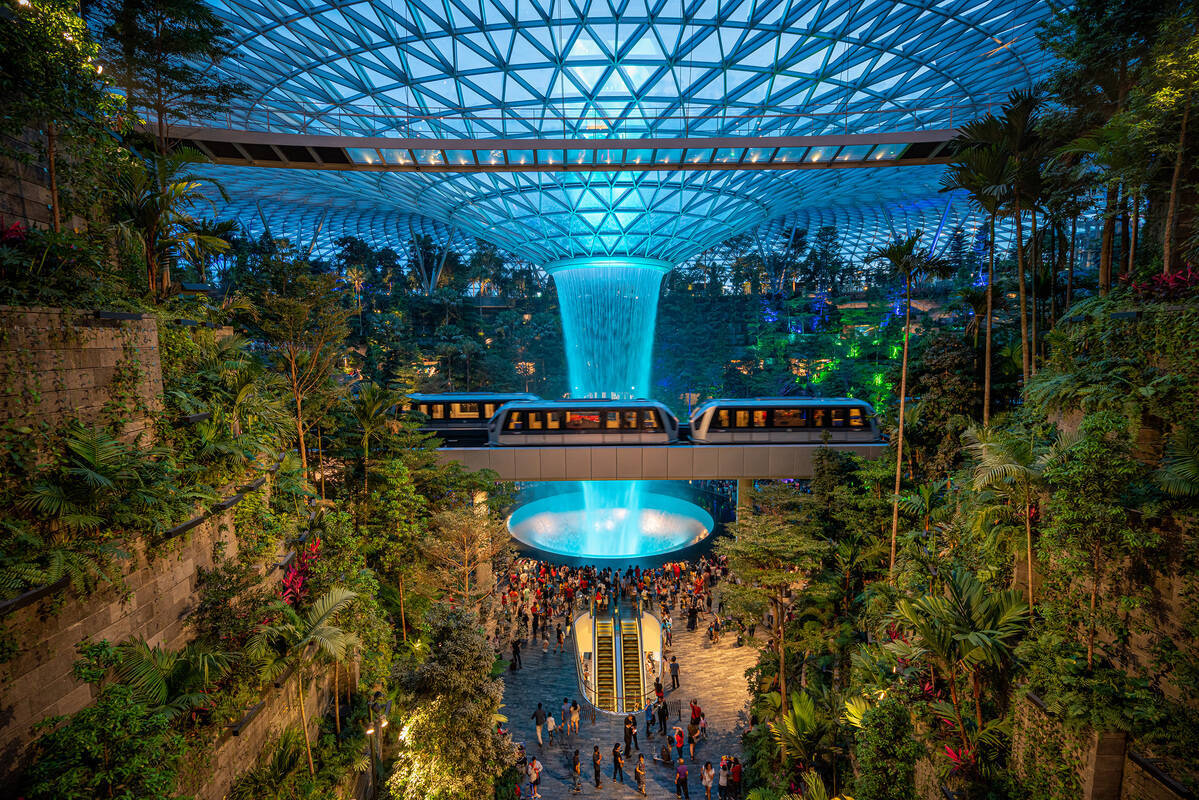 Kuwait International Airport is designed to provide high levels of comfort to passengers. The new terminal, expected to be completed in 2022 will be the Gulf aviation hub and enhance the airport's status throughout the Middle East.

The project aims to achieve LEED gold certification, becoming the first airport in the world to attain the accreditation for commitment to the environment. The structure provides thermal mass, and photovoltaic panels positioned on the roof help to harvest solar energy for the airport.

The airport's new terminal takes inspiration from local culture, art and architecture, and all building materials utilised will be climate responsive. The design will feature three symmetrical wings, akin to a bird in flight, and departure gates will be located along each one with a single roof canopy which filters daylight and directly deflects any solar radiation. The canopy will extend to the entrance with concrete columns highlighting organic forms inspired by the movement of the Kuwaiti dhow sailboat.

When completed, Kuwait International Airport will feature four levels above the ground and one below with an integrated baggage system which incorporates storage, sorting and advanced screening capabilities. Passengers will be able to walk from the central point to departure gates in very little time, thus, reducing the need for airport shuttles. 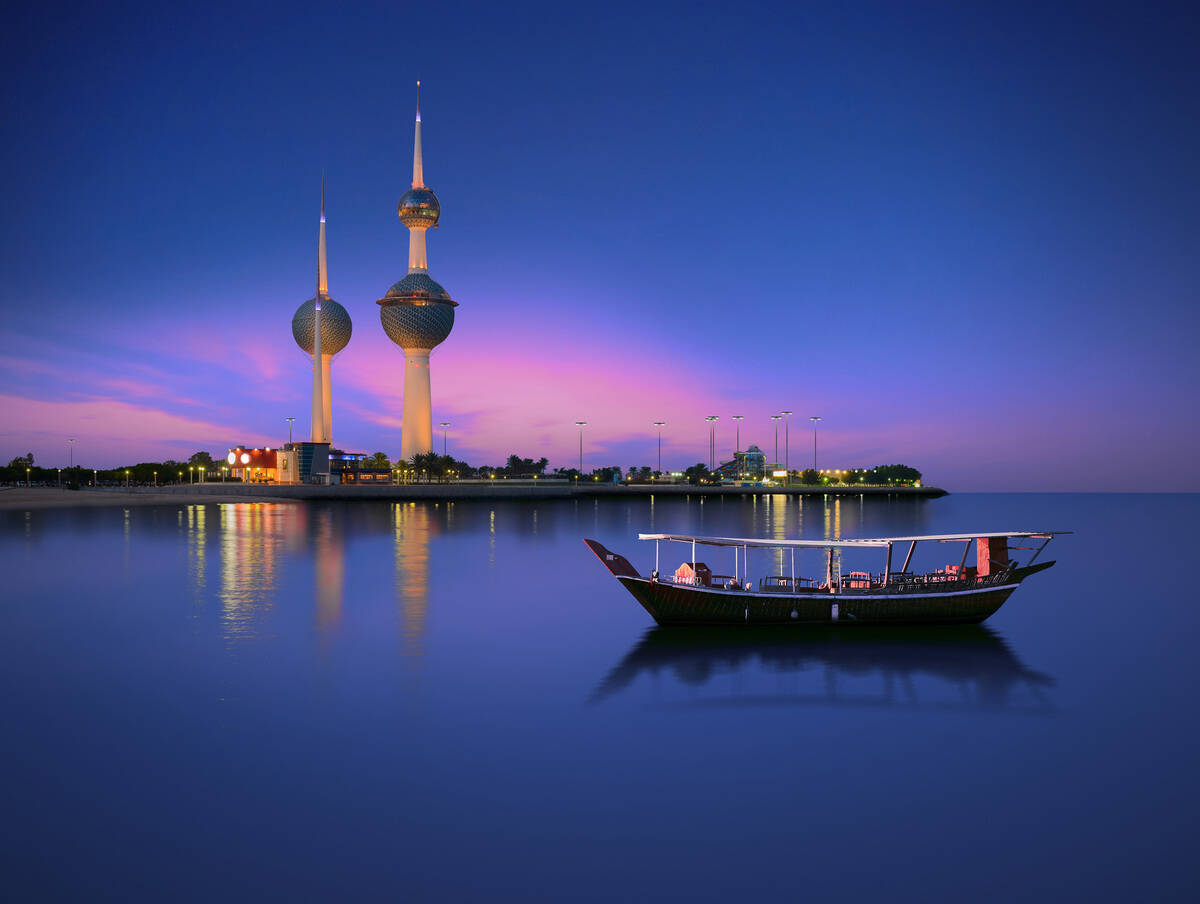