Croatia's Jadrana Magistrala winds down the Adriatic coastline and is one of the country's most scenic roads. Sandwiched in-between the turquoise waters of the Adriatic Sea dotted by islands on one side, and the majestic Velebit mountain range on the other, this is a picturesque drive of a lifetime. This single carriageway is also the country's longest state road linking some of the country's top coastal destinations. Taking the scenic route south? Here's where you need to stop along the way:

The coastal section of this Adriatic highway begins in Rijeka, an important port town and Croatia's third largest city. Rijeka is a 2020 European Capital of Culture, so there are lots of good reasons to make a stop here. Its grand buildings, including the Baroque-style city clock tower, are relics of the Austro-Hungarian era, which share space with architecture dating back to much earlier times, like the Roman arched gateway and circular cathedral of St. Vitus. Take a stroll down the Korzo, the lively pedestrian promenade, pause in one of the sea-facing cafes, or shop at the open air market to stock up for the long journey. 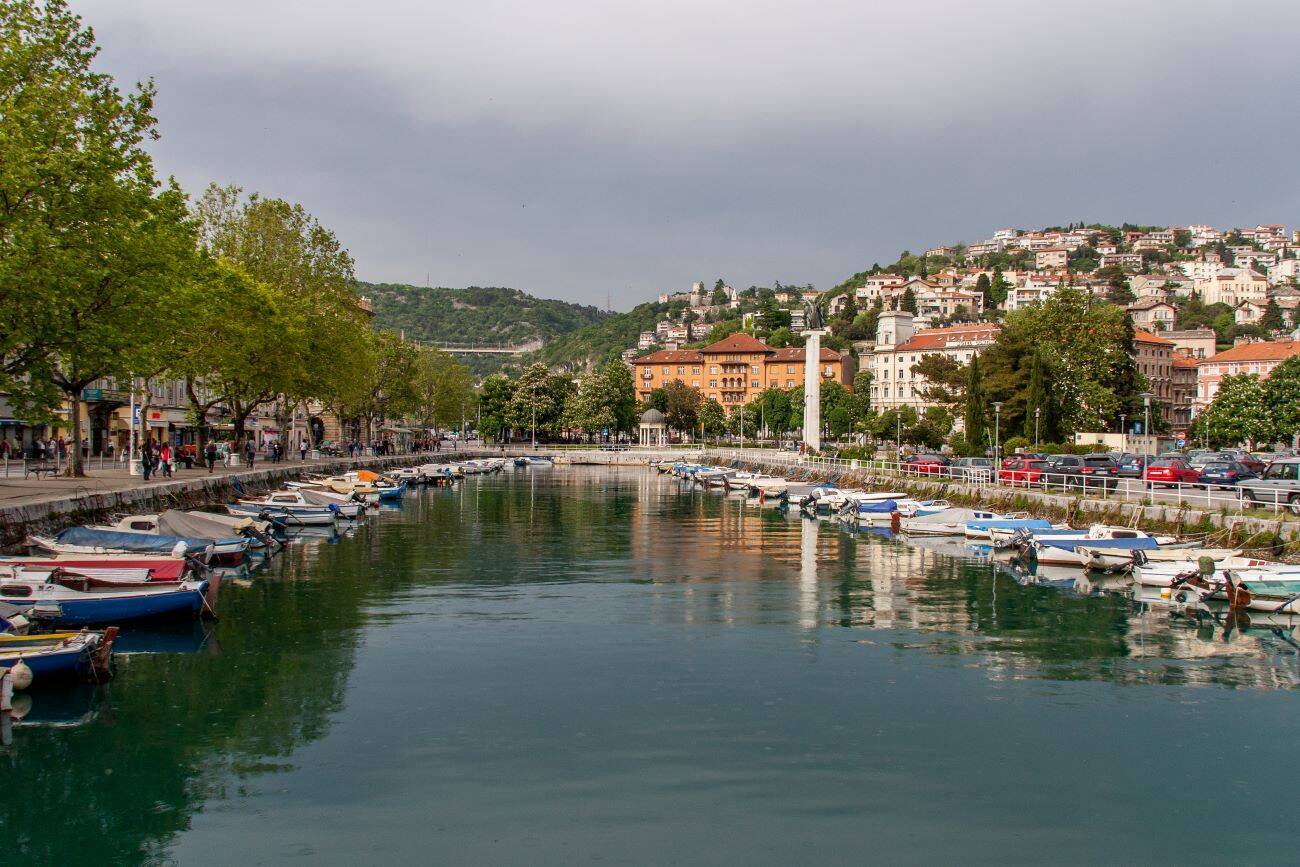 Drive 250 km south to reach seaside Zadar, a coastal hotspot and the launching pad to nearby islands. Its sights are concentrated in its old town where sections of its original walls dating to Roman and Venetian times are still visible. The first century Roman forum is flanked by the 9th century Byzantine-style St Donat's Church, while on its eastern side is the Church of St. Mary and Benedictine monastery, founded in the second century. But one of the city's biggest attractions is its fabulous sunsets which draw large crowds to the waterfront just before nightfall. Other big draws are the open air installations created by local architect and innovator Nikola Bašić. His sea organ, made up of 35 pipes hidden under stone steps descending into the sea, create a symphony of eerie whistling sounds as sea waves lap the steps. Set in the pavement just a few steps away, is his sun salutation: a circular installation of 300 glass plates that absorb the sun's energy during the day and produce colourful patterns of lighting effects at night. 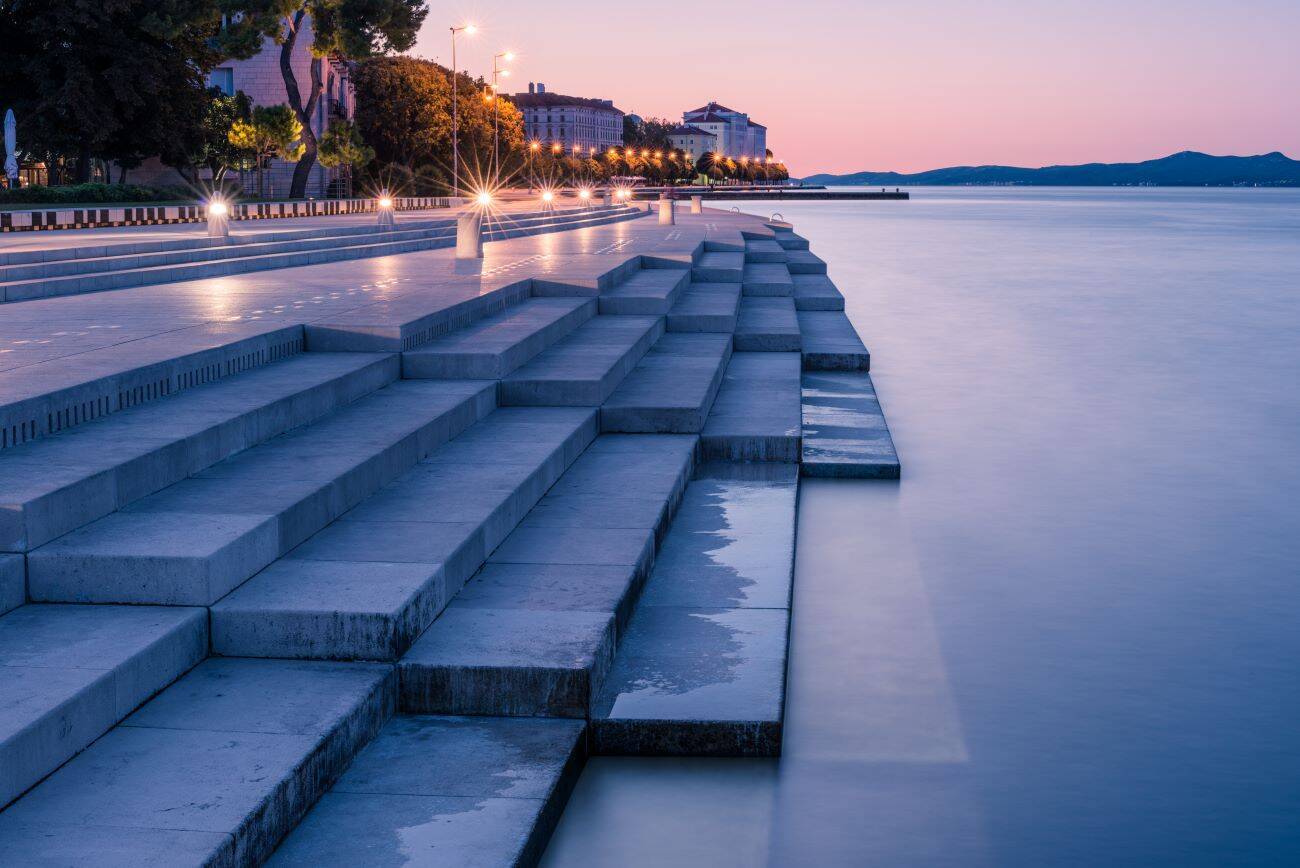 A further 75 km down the coastline is charming Šibenik, located on a narrow bay that connects to the Adriatic Sea via St. Anthony's channel. At the heart of its atmospheric medieval old town is the imposing 15th century cathedral of St James. Built entirely of white stone in Gothic and Renaissance styles, this is a UNESCO World Heritage Site. Neighbouring Venetian-style palazzos house the city museum as well as heritage hotels and restaurants, including the Michelin-starred Pellegrini. The imposing hilltop fortresses that once guarded the city have been restored and transformed into public spaces. St Michael's fortress boasts an open air theatre and offers superb views over the city, as does Barone fortress, now a multimedia museum. The recently restored St Nicholas fortress seems to float in St Anthony's channel and was added to UNESCO's World Heritage list in 2017. The city's seaside promenade leads past sea-facing cafes and bars all the way to recently redeveloped Banj beach, a tidy pebble beach framed by eye-catching views of the old town. 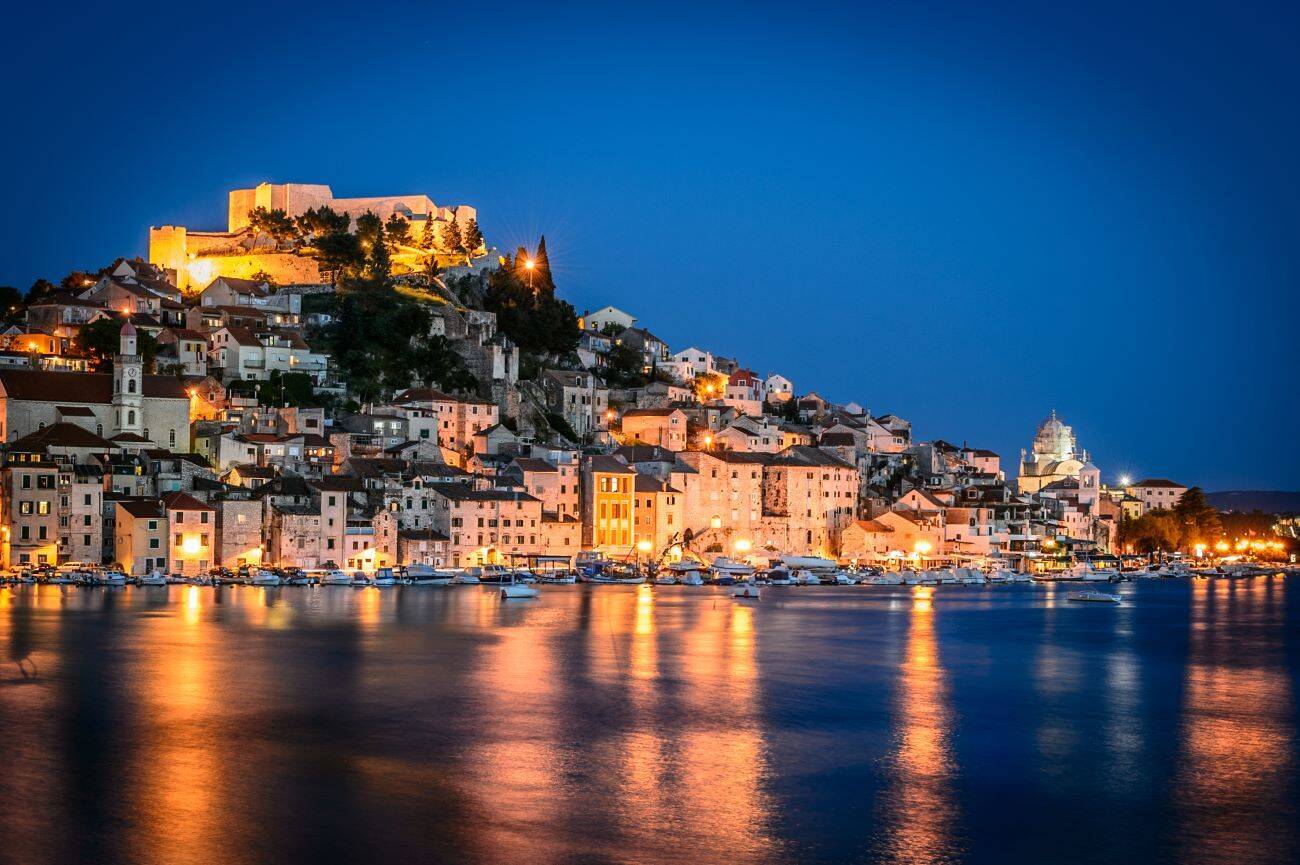 Another coastal highlight is the medieval city of Trogir which is actually a tiny island linked to the mainland by two short bridges, while a third connects it to the adjacent island of Čiovo. It also happens to be another UNESCO World Heritage Site. Its skyline is dominated by the bell tower of St. Lawrence Cathedral which sports a surprising mix of styles: 15th-century early Gothic, pure Venetian Gothic, and late 16th-century Renaissance. Opposite the cathedral's entrance are other superb examples of Venetian architecture: the Čipiko Palace complex, 15th-century clock tower and loggia. Entirely closed to traffic, the town's compact maze of cobblestone lanes are a delight to explore, with many handsome examples of Romanesque and Renaissance architecture at every turn. 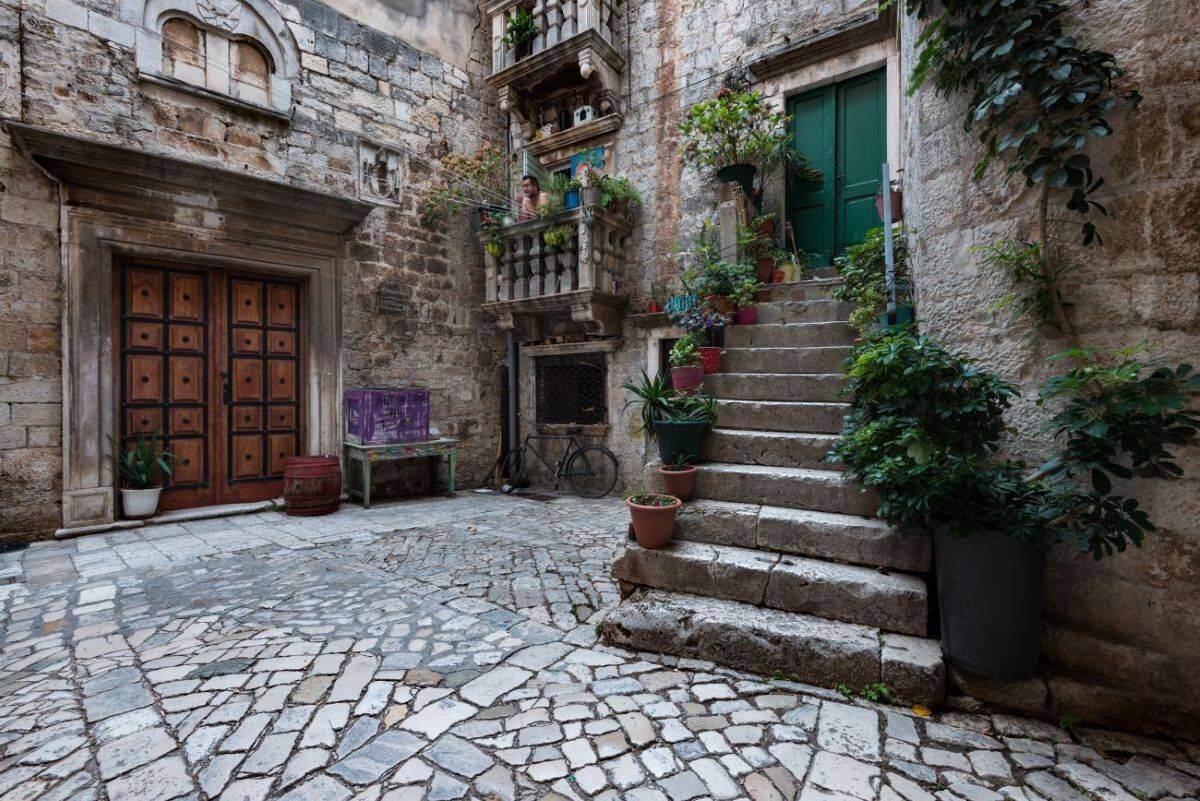 Your next stop a further 30 km away should be Split, Croatia's second city, an important port and the gateway to several Dalmatian islands easily reachable by ferry. Its highlight is its fabulously preserved 4th century Diocletian's Palace perched on the edge of the seaside promenade. This UNESCO-listed palace is actually a tiny city tucked within a city, covering an area of 30,000 square metres and made up of a maze of narrow cobblestone passageways, hidden courtyards, and Roman-era palazzos set in-between fortified walls. Once the former Roman emperor's living quarters and military garrison, its over 200 centuries-old buildings now house shops, hotels, museums and cafes. Climb up the bell tower of St Domnius Cathedral and you'll be rewarded with sweeping views over ancient rooftops, the Adriatic Sea to the south and the mountains to the north. 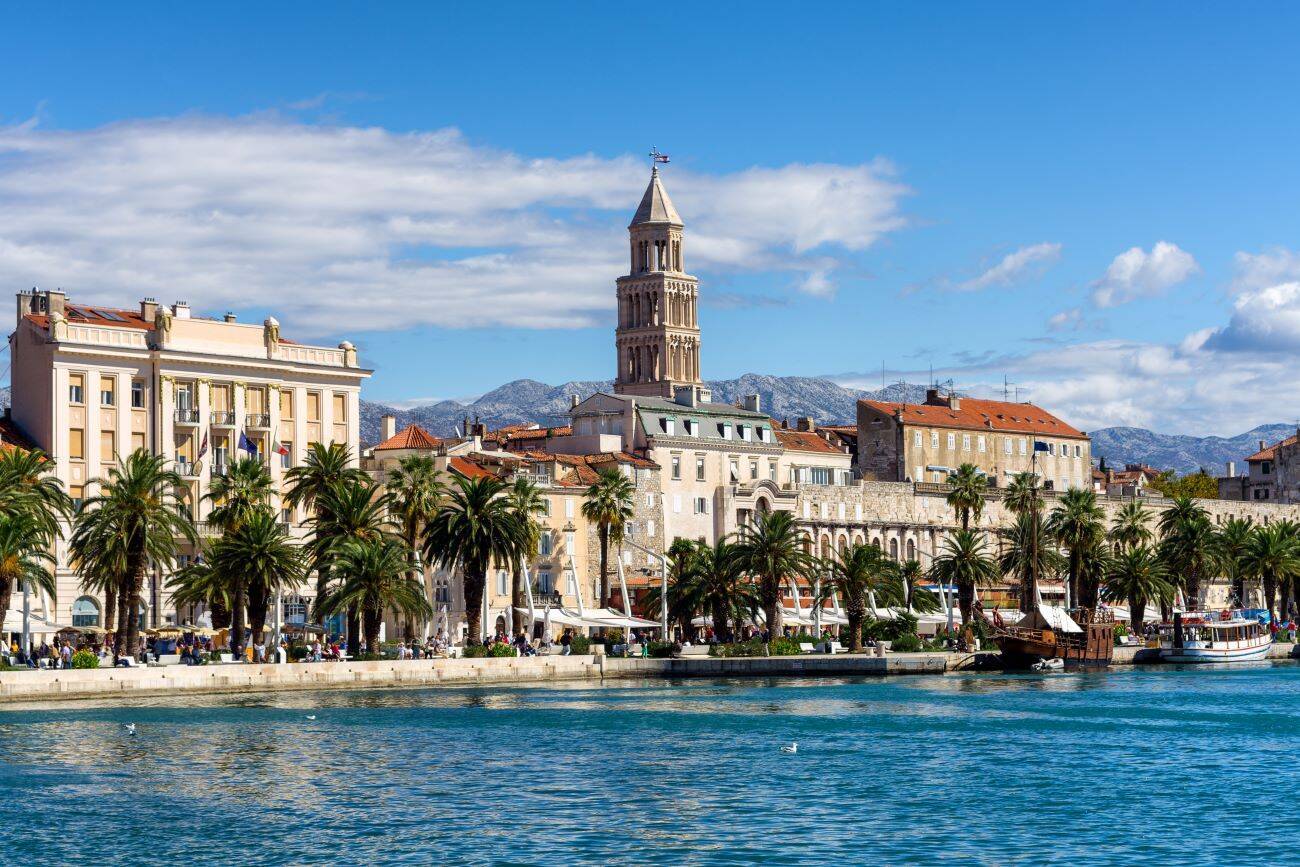 Continuing southwards from Split on the way to Dubrovnik, you'll come to Makarska, a favourite stop with beach lovers. Its palm-tree lined seaside promenade leads the way to fine pebble beaches, some only accessible on foot. The city's spectacular backdrop of mountains also makes Makarska a popular stop with trekkers. The climb up the towering Mount Biokovo rewards with jaw-dropping views over the Adriatic Sea and islands from one of the Croatia's highest peaks at Sveti Jure (Saint George) at 1762 metres. 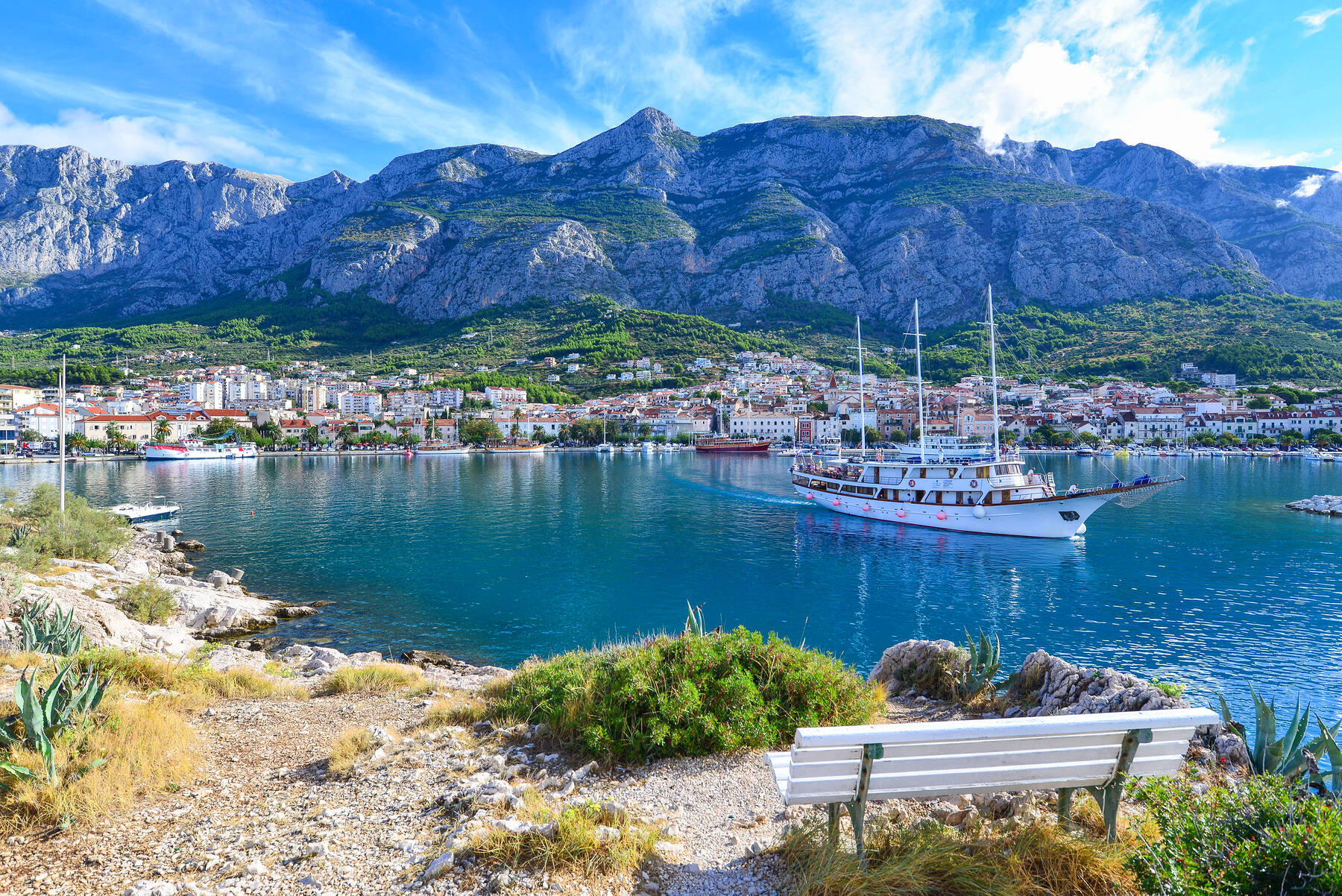 Located almost at the southernmost tip of Croatia's long coastline is Dubrovnik, the country's best-known tourist destination. Its medieval walled old town is yet another spectacular UNESCO World Heritage Site that was listed way back in 1979. A must-do is the 1.2-mile walk along the massive 10th century city walls encircling the old town and overlooking its terracotta rooftops and the waters of the Adriatic. The main thoroughfare of the pedestrian-only old town is the Stradun, linking the western Pile and eastern Ploče gates, the main gateways. Tucked in between the centuries-old walls are Baroque buildings, picturesque squares, Renaissance churches, Gothic monasteries and palaces, and stone fountains. 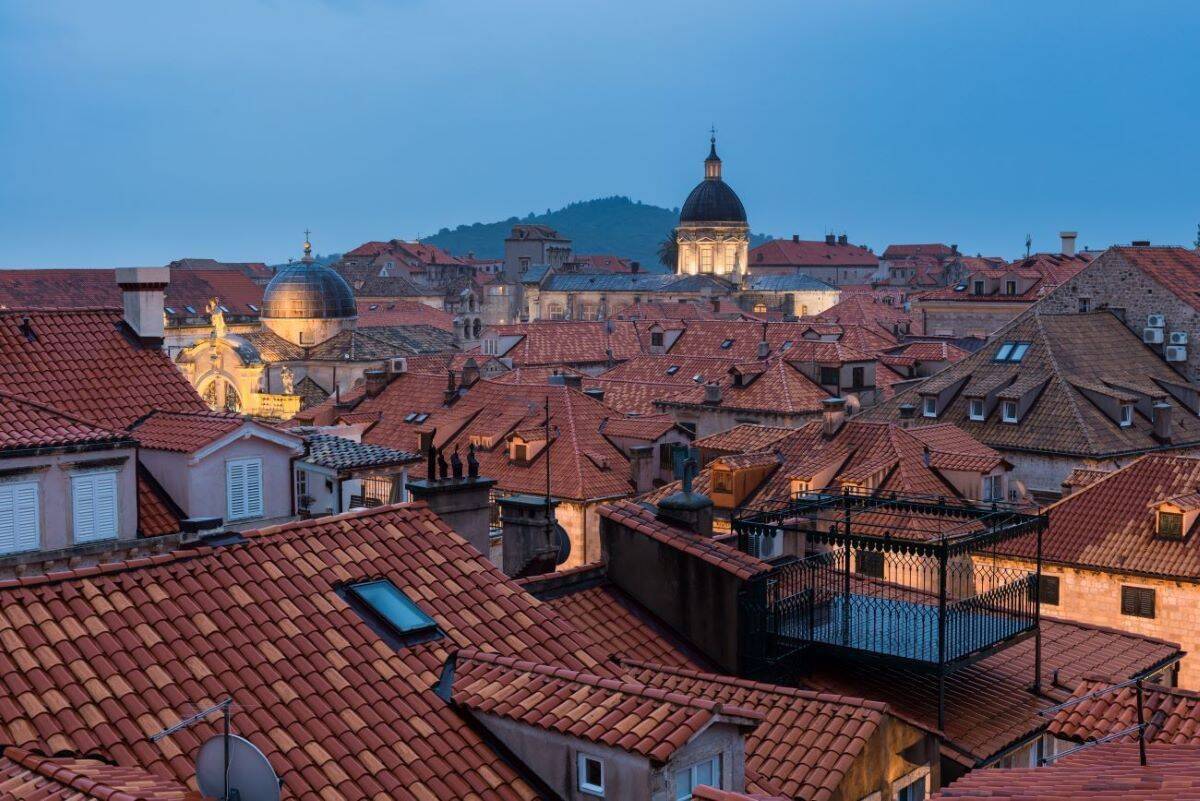 Isabel writes about travel, hotels, food, arts & culture and green living. Her words and images have been published in inflight magazines, major UK newspapers, and online at Lonely Planet, Fodor's, Time Out and Euronews Living. A serial nomad, she has lived on three continents and visited close to 50 countries. Home is currently a hilltop village in Istria, Croatia.