In Mostar, reached by narrow hairpin bends flanked by shrines and stalls selling honey and tobacco, ubiquitous mosque minarets rise like middle-fingered salutes to the Serbians. Every Bosnian remembers November 9 1993 – the day the Serbians bombed Mostar’s Stari Most Bridge constructed in 1566 on the orders of Sultan Suleiman the Magnificent.

The swooping stone arch was rebuilt in 2004 from rubble hauled out of the River Neretva. Today daredevil divers fling themselves off the parapet into the icy waters below for cash.

In 1992 the Croats and Bosniaks forced out the Serbs before turning their guns on each other. With pockmarked walls and bombed-out building shells, Mostar still looks as though it was kicked in the teeth but today, sizzling in the sunshine, the cobbled streets of the medieval Ottoman Old Town exude a peaceful sense of bonhomie.

Here, as in Sarajevo, entrepreneurial coppersmiths have beaten shell casings into pens to sell as souvenirs. There’s no shortage of ale, either. Tourists and locals alike bond over live music at the Black Dog Pub next to the crooked bridge (Kriva Cuprija) while Shankly’s Pub sells 150 craft beer varieties.

Restaurants line the waterfront of the Kravice Falls, 25miles south of Mostar, where tourists can swim or canoe with the locals. Also, south of Mostar on the River Neretva’s left bank, Citadel Počitelj ‒ built by King Tvrtko I in 1383 ‒ is an Oriental-style fortress. Climb the ancient stairs to the watchtower for a magnificent view of Mostar. 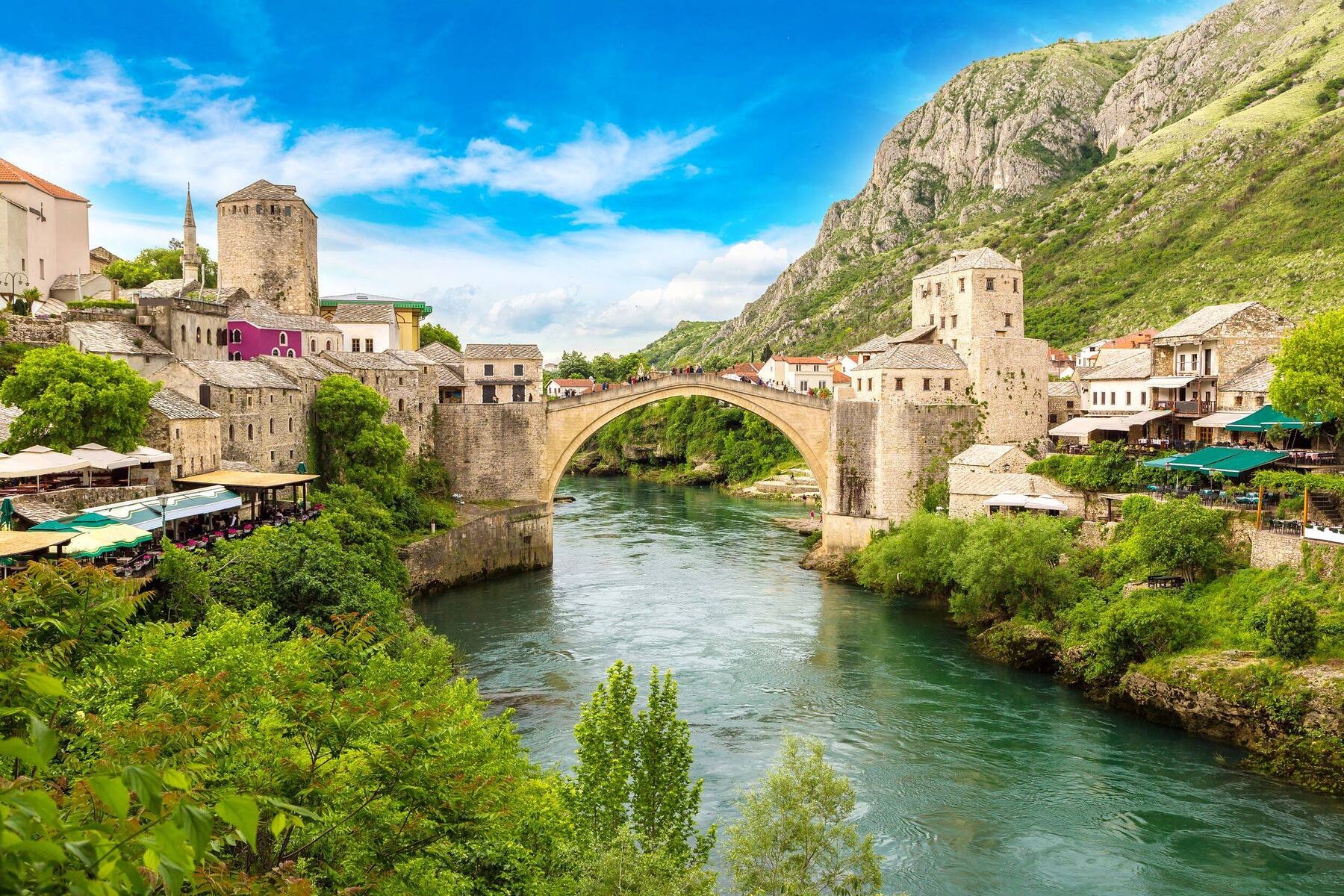 In 2005 Professor “Sam” Semir Osmanagić, author of 15 books on ancient civilizations, discovered that four vegetation-covered hills surrounding Visoko, 24,8 miles northwest of Sarajevo, were, in fact, ancient pyramids. A nearby cave provided the entrance to the “world’s most extensive underground network of tunnels” believed to stretch for hundreds of miles.

Within a single generation, according to the guide, an advanced civilisation ‟hollowed out the post-glacial conglomerate for two miles in eight directions – linking the Sun, Moon, Love, and Dragon pyramids, which they built by adding pebbles, quartz crystal, and limestone to the excavated conglomerate”.

At 722 feet, the Sun pyramid is a third higher than Egypt’s Great Pyramid of Giza and climbing up its side affords great views of Visoko below.

If it’s rejuvenation you seek, a massive egg-shaped 35 000-year-old quartz monolith found within the Ravne tunnel network’s “healing chamber” generates negative ions, ultra-sound frequencies, and magnetic energies, as proven by the Institute for Nuclear Physics in Zagreb’s analysis. Varying ceiling heights further circulate the airflow throughout the network of tunnels.

“Pyramids were never used as burial places,” adds our guide. The ancients used pyramid frequencies to advance human health so it can’t have been a place for dead people.”

A 33 000 ft high ultrasound beam with a 28-33 kHz frequency measured from the top of the Sun pyramid, “would have made it the Earth’s biggest antenna” but apparently the tunnels were filled in with soft sand around 4600 years ago, putting the pyramid on “standby” with just 3% of its capacity, ‟to prevent the technologies falling into the wrong hands”.

Mainstream scientists can scoff if they like. The Bosnian government intends to keep digging. 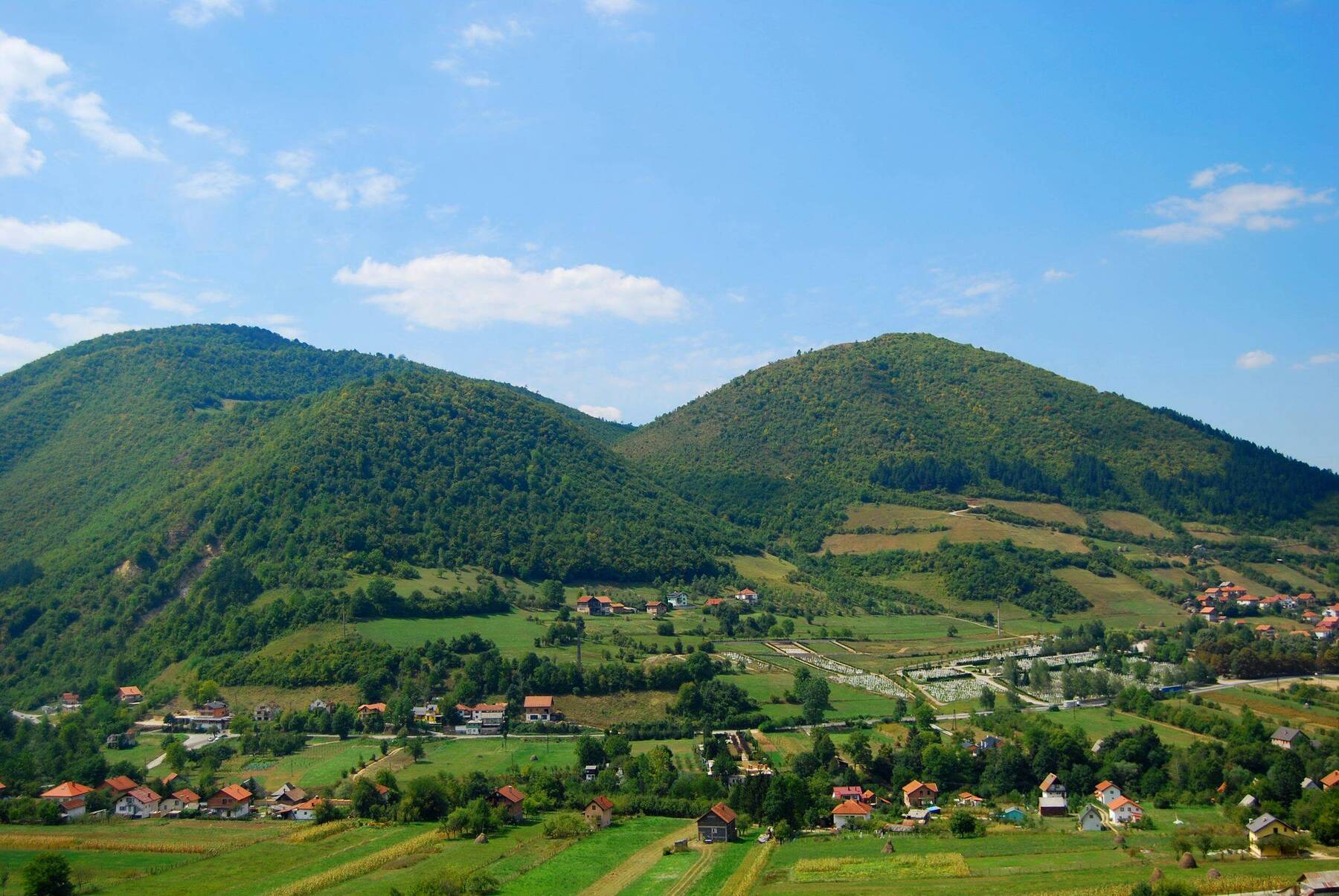 Sarajevo, built in the 16th century, is a riot of bazaars and minarets buzzing with commerce. Along Ferhadija Street you’ll find 19th-century apartment blocks, workshops, racks of jewellery, and souvenirs. Feast on fresh tuna at Apetit in Gazi Husrev Begoza, which also does a decadent tiramisu.

Just 30 steps uphill from the Sebilj fountain, the Ministry of Cejf serves strong coffee in china cups with a slice of Mrkva cake. Vucko is one of Sarajevo’s buzziest bars, while Dveri, festooned with plants, offers food and wine from every part of the former Yugoslavia

A cable car whisks visitors 5,000 feet above the city to the top of Trebević Mountain also the site of the Olympic bobsleigh track, for spectacular views. Other landmarks include the 1531 Gazi Huzrev-beg Mosque, the Seher Cehaja bridge, City Hall and library. Don’t miss the Tunnel of Hope and War Childhood Museum for some sobering snapshots of war’s inhumanity. Here you’ll find heartbreak wrought by the four-year Siege of Sarajevo, but also hope and resilience. 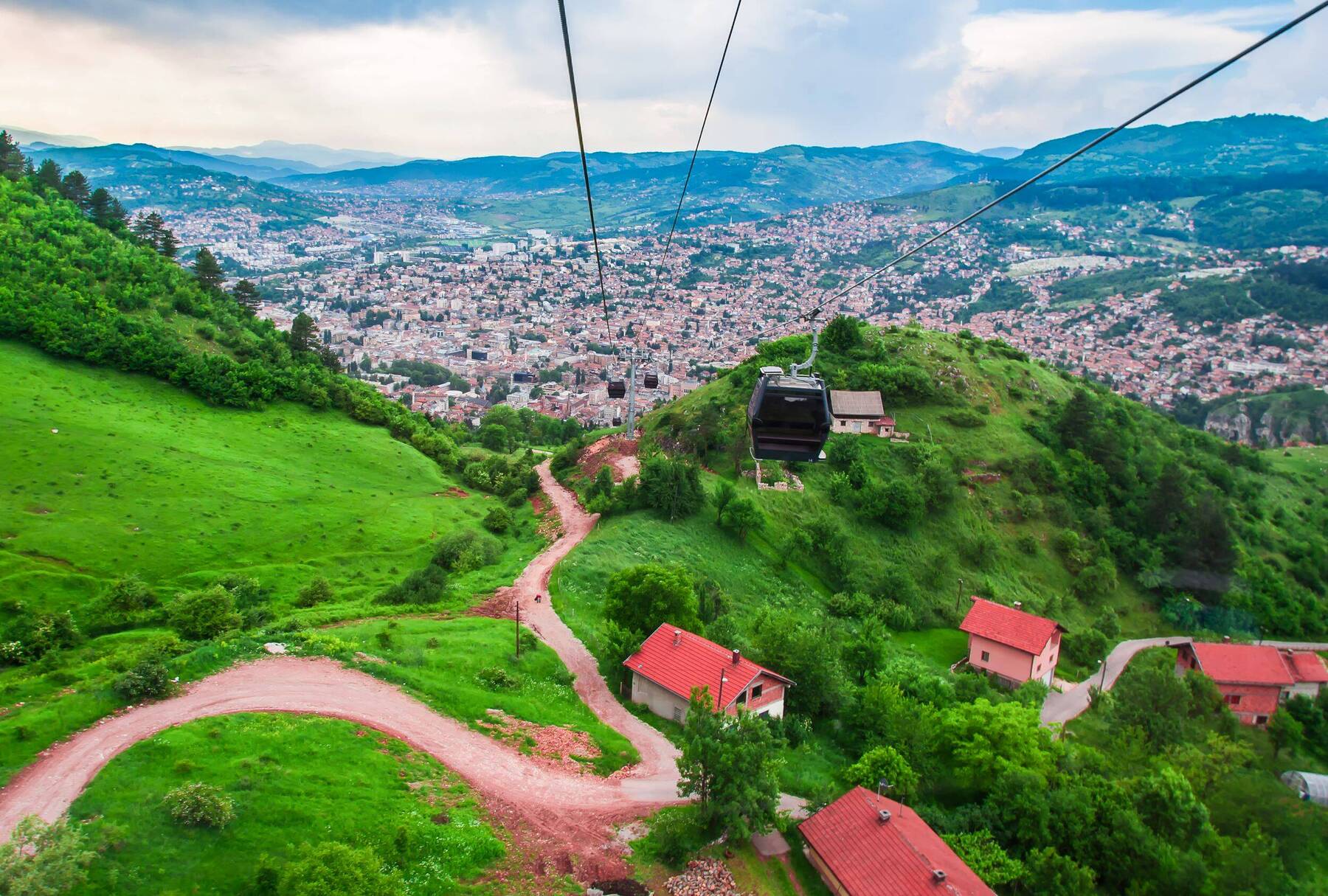 A crossroads of cultures define Konjic and its spectacular surrounding countryside where river rafting is popular. Tucked into the mountain Zlatar south of the town is a massive horseshoe-shaped bunker built in the 1950s on the orders of Josip Broz Tito, the late leader of the former Yugoslavia.

Constructed over 26 years at a cost of £3 billion, it could house 350 members of the ruling elite in 100 rooms with supplies for six months in case of a nuclear attack. Its existence was top-secret until the '90s and today the 70,000 square-foot bunker serves as a contemporary art museum.

Visitors can tour its maze-like surrounds that comprise residential spaces, conference rooms, offices and a "presidential bloc’. It’s a real blast from the past! 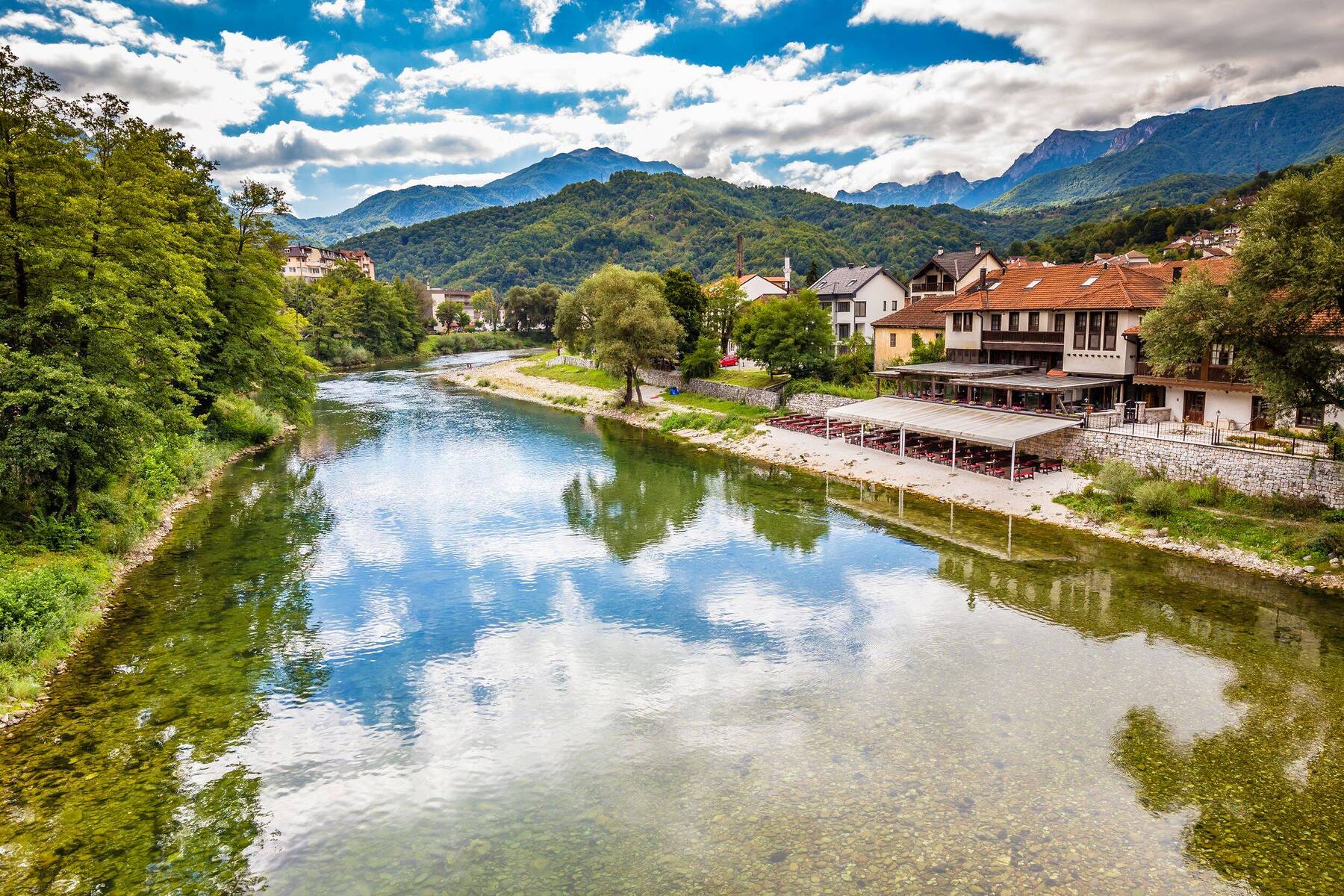 Hike through Perućica with a ranger

Birch forests abound all over Bosnia but Perućica, a 1,300-hectare spread in the east towards Montenegro, is one of Europe's last virgin forests and a Unesco World Heritage Site.

Many trees are more than 300-years old. Partially inaccessible due to its hilly terrain, the forest can only be visited with rangers. 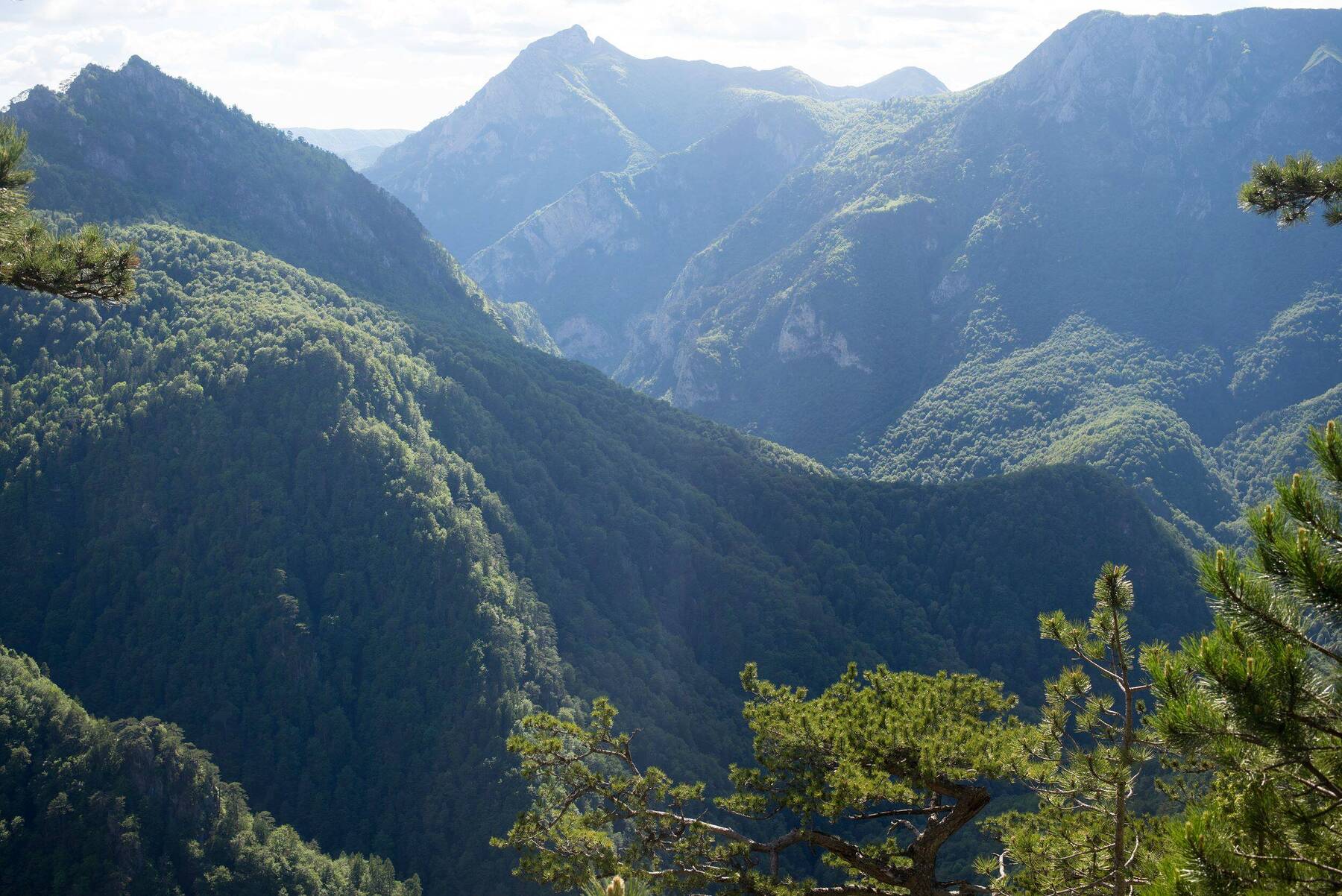