Bornholm: The wild and remote island of Denmark

Bornholm: The wild and remote island of Denmark

Art of Glass and Architecture

With more galleries than bakeries on Bornholm, the island’s extraordinary evening light that bathes the sea and sky in pearly pinks and mauves makes it a haven for artists. The eccentric Danish painter Oluf Høst (1884 -1966) whose museum home in Gudhjem is worth a visit, found his muse here and nowhere else. His works fetch thousands of pounds today but during his life Høst refused to part with any of them, even ripping a painting in half rather than sell it to a dealer who had proffered a briefcase crammed with 500 Kroner notes.

North of Gudhjem the architecturally-splendid Bornholm Art Museum overlooking fields of grazing cows showcases local artists with some impressive sculptures outside. Take the path to the rocky coast for even more spectacular views.

Watch glass being blown at Baltic Sea Glass between Svaneke and Gudhjem, before picking out a unique show-stopping piece ‒ or three ‒ to take home.

Shop for Danish fashion, glass, and homeware in Svaneke, Oluf Høst’s birthplace on the east coast. Pernille Bülow’s mouth-blown lamps remain a top seller 32 years after she first established her studio on Glastorvet in 1989.

More examples of the island's progressive design proclivities include the 1950s pyramid-shaped Svaneke Water Tower and Green Solution House in capital Rønne, both by Jørn Utzon, the Danish architect responsible for the Sydney Opera House. 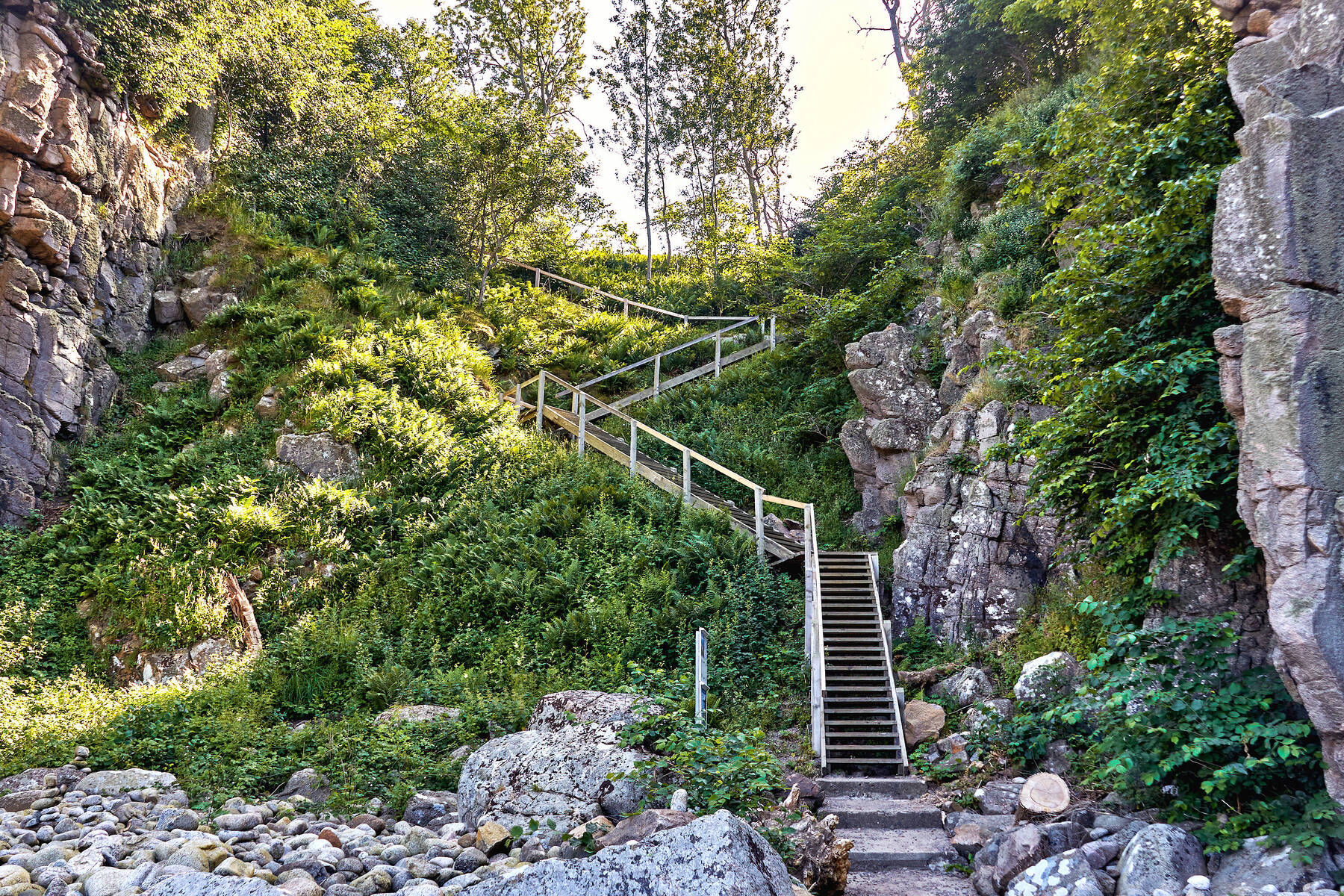 Take an hour’s boat ride to Ertholmene, a group of three tiny tranquil islands for a day trip. Book your ferry ticket online. If possible, walk down to the Gudhjem harbour rather than fight for parking. Connected by a walk bridge, Christiansø and Fredericksø have around 100 residents between them, descendants of King Frederick IVs army.

Graesholmen is a protected bird sanctuary with thousands of seabirds and a few sunbathing seals. Pack a picnic basket and once you’re there, hire a local guide.

You can visit two old fortification towers built to fend off Swedes, Russians and Germans over the decades. There’s an old prison, a restaurant, a general store, and a hotel with six rooms. Pick up a few jars of pickled or curried herring from Ruth’s Sild at the Frederiksø harbour before you leave. 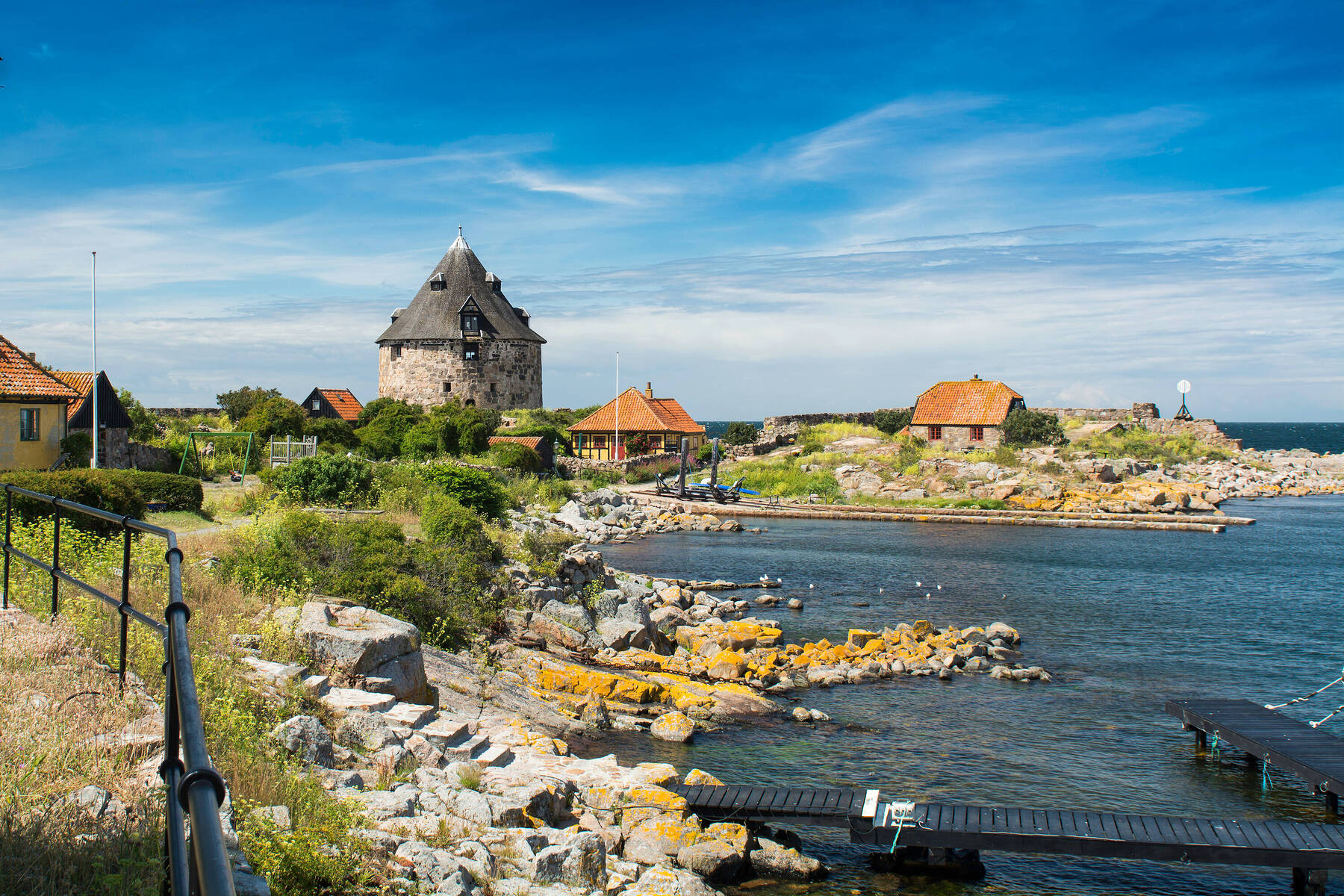 Reflections on the past

Gudhjem is a good starting point for a 10-mile trip inland to Østerlars, the largest of Bornholm’s four 12th-century round churches built by the Knights Templar on their way to the Crusades. Whitewashed with metre-thick defensive stonewalls, the two upper levels reached by a narrow winding staircase were used to fire on enemies. Downstairs, faded 13th-century frescoes depict sinners descending into hell.

Hammerhus Slot, Northern Europe’s biggest castle ruin founded by Danish King Valdemar Sejr in 1200, glowers from a cliff above the Slotslyngen woods. Its dungeon once hosted Princess Leonora Christine and her husband Corfitz Ulfeldt. Jailed for treason, the royal couple festered inside its dank interior for 17 months until they bought their temporary freedom by relinquishing their property deeds in 1661.

Dine at Restaurant Le Port in the village of Vang on the northwest coast, which serves fine French-inspired Nordic cuisine. A five-minute drive from Hammerhus, its three-level terrace offers the best sunset views on the island. 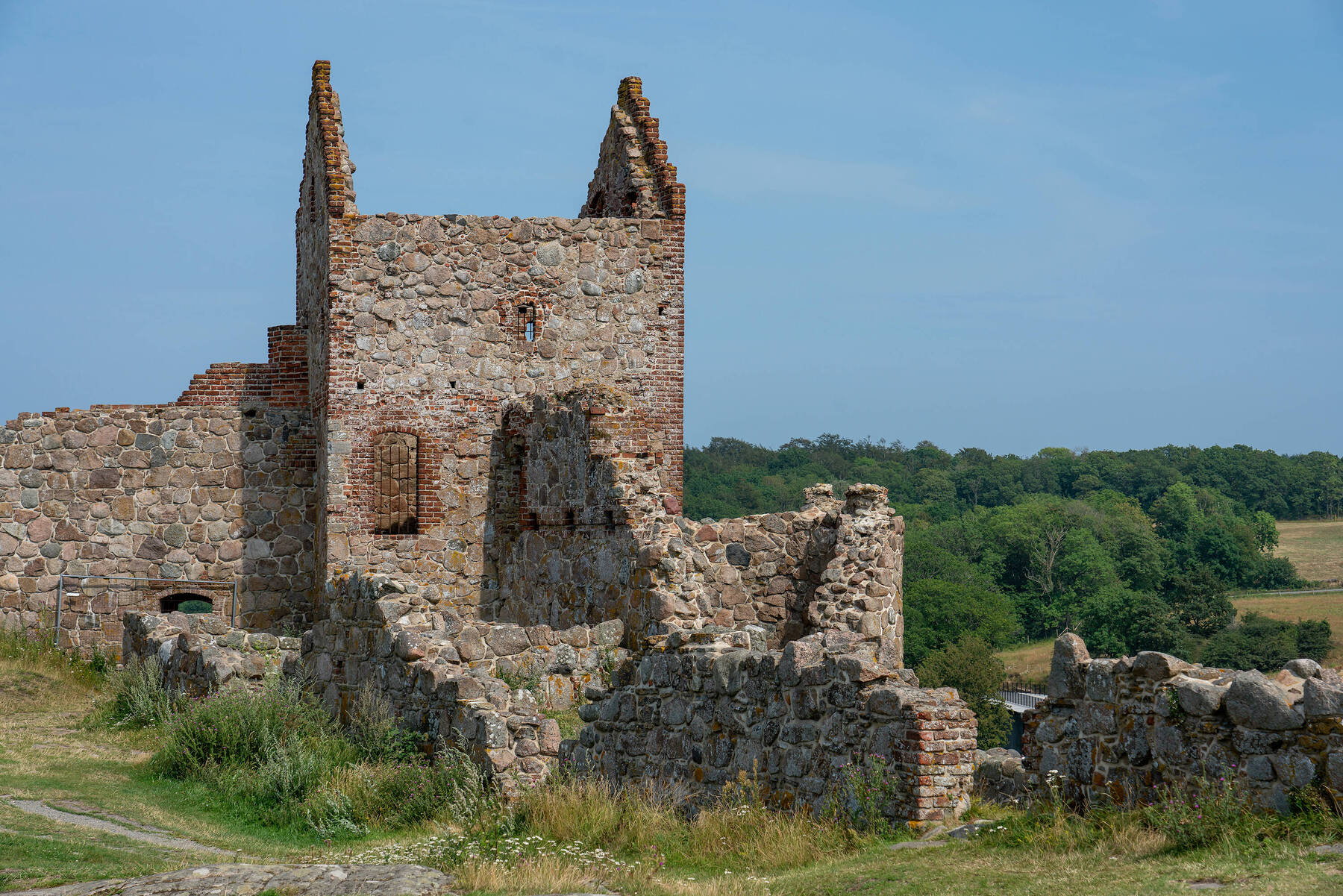 Hike across forests and cliffs

At 3800 ha Almindingen is Denmark’s third-largest forest and the site of Viking artefacts and runic stones. Expect to see deer, foxes, and the odd bison as you hike or mountain bike up to Rytterknægten, 532 feet above sea level.

Examine Bronze Age monoliths, rock carvings, preserved burial mounds and cairns on Madsebakke near Sandvig, where ships, circles, and sun wheels have been scratched into the rock.

More than 360 miles of bike and pedestrian paths festooned with lakes, valleys, marshes, cliffs populated with birds, and forests criss-cross the island. Rugged cliffs break the shoreline with the trail around the Hammerodde, Bornholm’s most spectacular northerly point. Start at Sandvig for a strenuous 5-mile hike using the Lille Fyr lighthouse as a marker to Salomon’s Kapel, a ruined 14th-century chapel. From here, you can see the south coast of Sweden, 23 miles away. 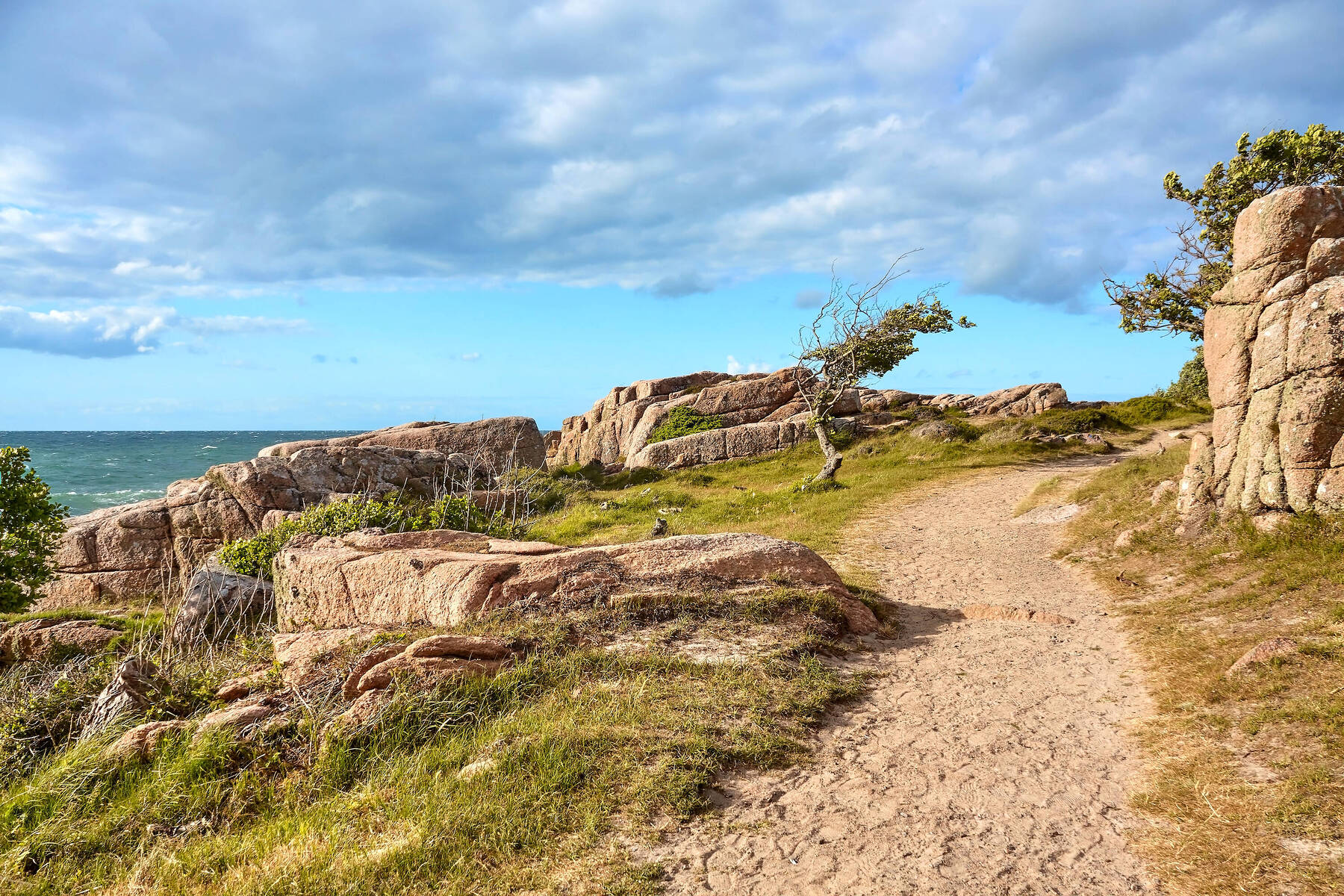 Mingle with the locals

On Saturdays in Svaneke, you can watch the locals bet on chicken bingo, quite the crowd puller. Organisers place three hens on a street grid divided into small numbered squares. If a hen poops in your square, you win your bet.

Quaff the local eponymous brew from the pet-friendly Hotel Siemsens Gaard overlooking the harbour or sample the yummiest home-made icecream from Svaneke Is. If you have children to entertain, nearby Brændesgardshaven is an old-fashioned amusement park with a petting zoo, rides, and waterslides.

Feast on ‘Sol over Gudhjem’– Bornholm’s national dish comprising smoked herring, radish, and a raw egg yolk on rye. If you’re in Gudhjem, Broddan offers a delicious variety washed down with tots of Akvavit, guaranteed to liven up post-prandial walks back to the retro StammersHalle Badehotel. 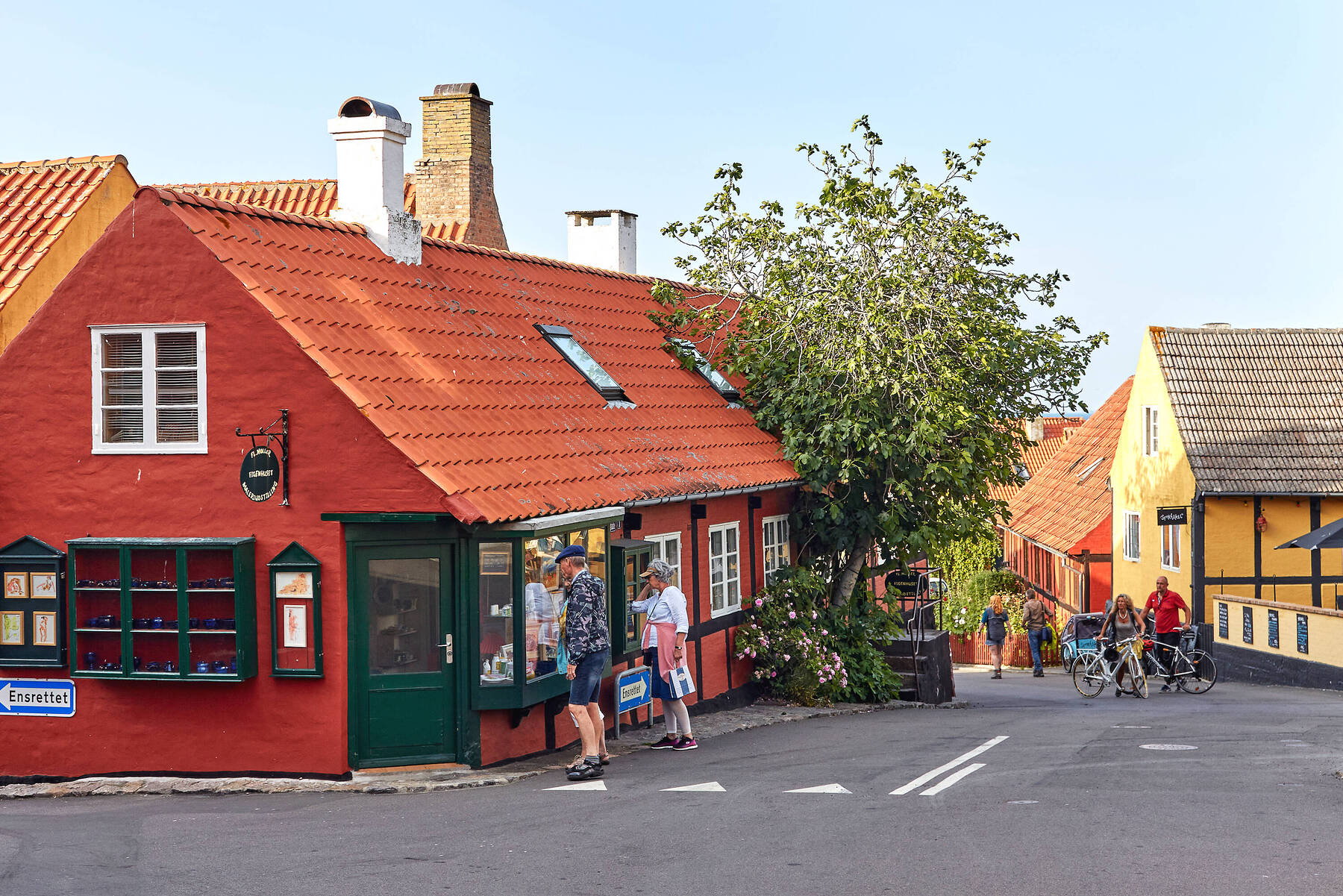