A cafe crawl of Melbourne’s CBD

A cafe crawl of Melbourne’s CBD

Melbourne runs on coffee – from flat whites on the way to work to afternoon iced lattes and post-dinner espresso. Catering to the local’s caffeine cravings, the compact central business district is bursting with beans. This café crawl takes you from upmarket retail destinations to the city’s famous street art-strewn laneways, with plenty of coffee stops along the way.

The morning coffee run turns into a pastel-hued escape from reality at this bright and breezy space next to acclaimed music venue the Forum. From its mint-green light fittings and blush-pink seating to the curved counter, geometric tiled floor and tropical pineapple branding, it’s no wonder Vacation is popping up on Instagram feeds across the city.

Once a Chinese restaurant, the team worked with an interior designer to remove a false roof and install floor-to-ceiling windows that offer views of the palm tree-studded Botanic Gardens. Vacation roast their own coffee, which is served up by baristas in the 10-seater space or sold in bags to take home. For something extra-special, order the espresso soft-serve ice cream – it’s like My Whippy, but for grown-ups. 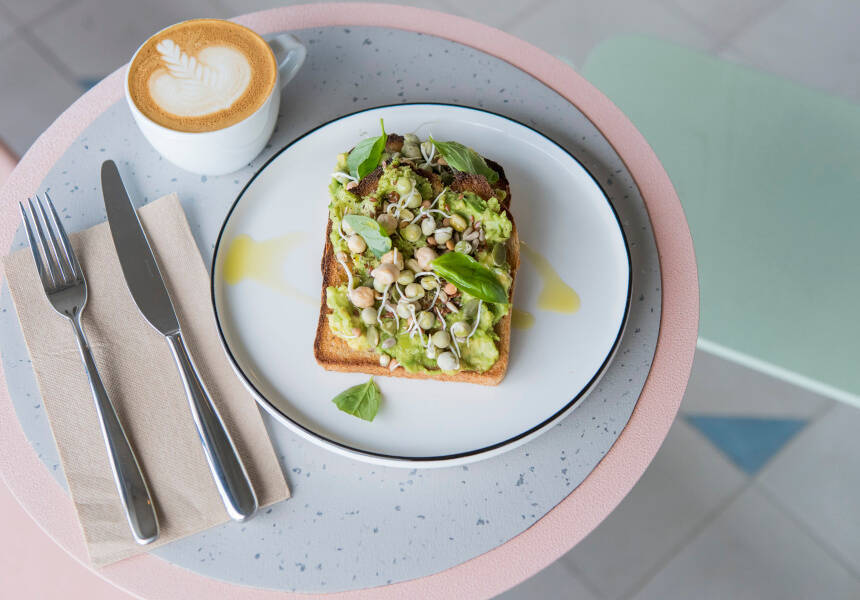 Just minutes from Federation Square and Flinders Street train station, Dukes offers an oasis of calm in this constantly buzzing part of the city. Stop to snap some street art before escaping the tourist crowds and following the locals to this relaxed café on Flinders Lane.

Strong sustainability and environmental focus sees the team source and roast beans that have been ethically traded and sourced from individual farms or small cooperatives. While a range of brewing options – from filter and Aeropress to manual pour-over – will satisfy even the most curious coffee geek.

Kitted out with recycled tiles and reclaimed timber, the sophisticated interior invites you to rethink ordering your coffee to take away and instead spend some time catching up with friends over a few pastries from Melbourne-based patisserie Mosaic. 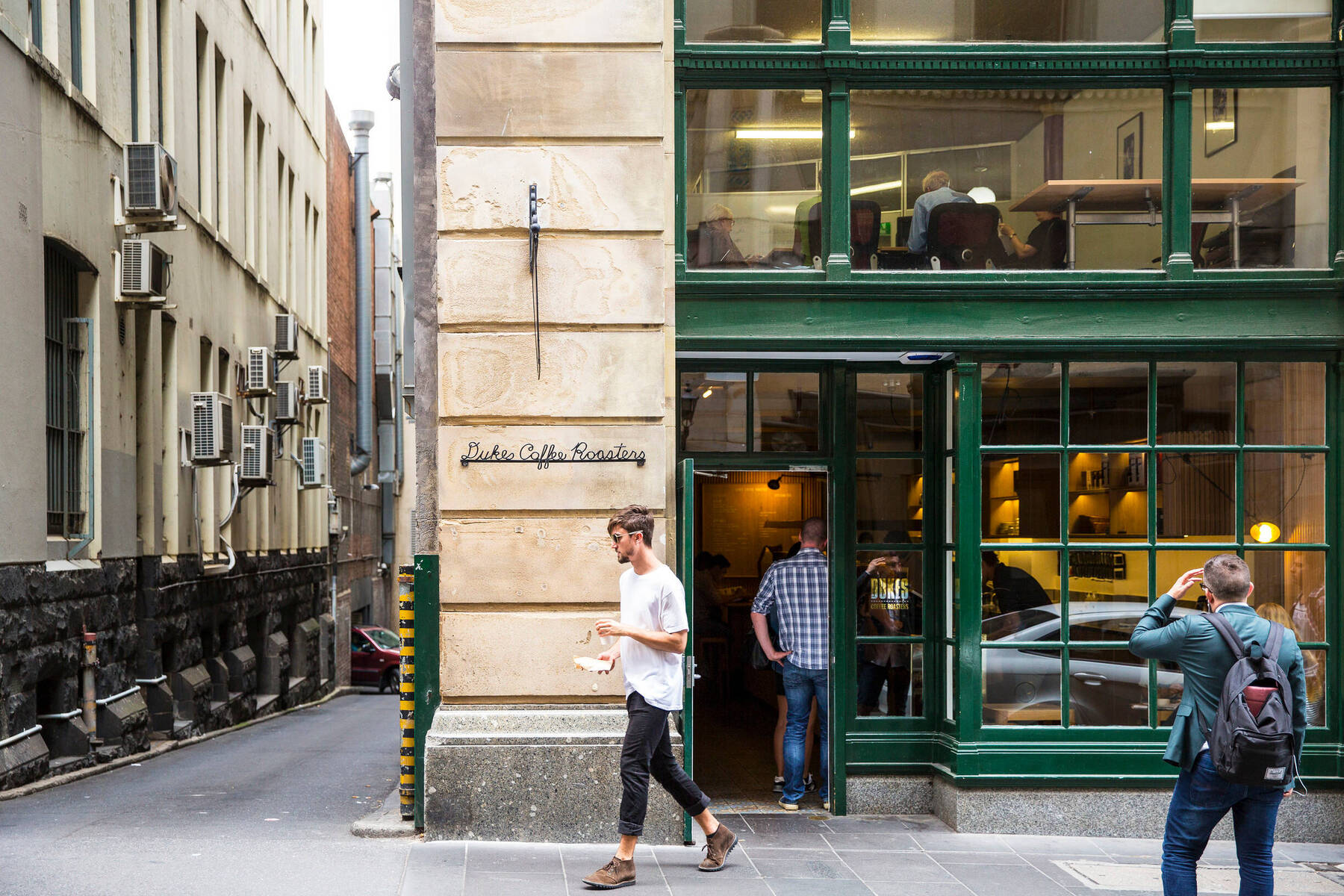 Situated close to smart shopping destination Emporium Melbourne, it’s no wonder this minimalist option takes a seriously stylish approach to serving coffee. Having been fitted with a state-of-the-art La Marzocco Modbar, you can forget about shouting your order across a bulky coffee machine. Instead, a row of sleek white taps dispenses shots of coffee, giving baristas plenty of space to talk you through the process.

The usual coffee suspects are all on offer, but this concept café has swiftly gained a reputation for its iced coffees and house-made Bubble Cup – single-origin cold brew coffee that’s poured over slightly sweet coffee-soaked tapioca balls.

After all this cutting-edge coffee making, continue your retail therapy with a trip back in time as you wander the mosaic walkways of Block Arcade, which was built in the late 1890s and revels in its original features. 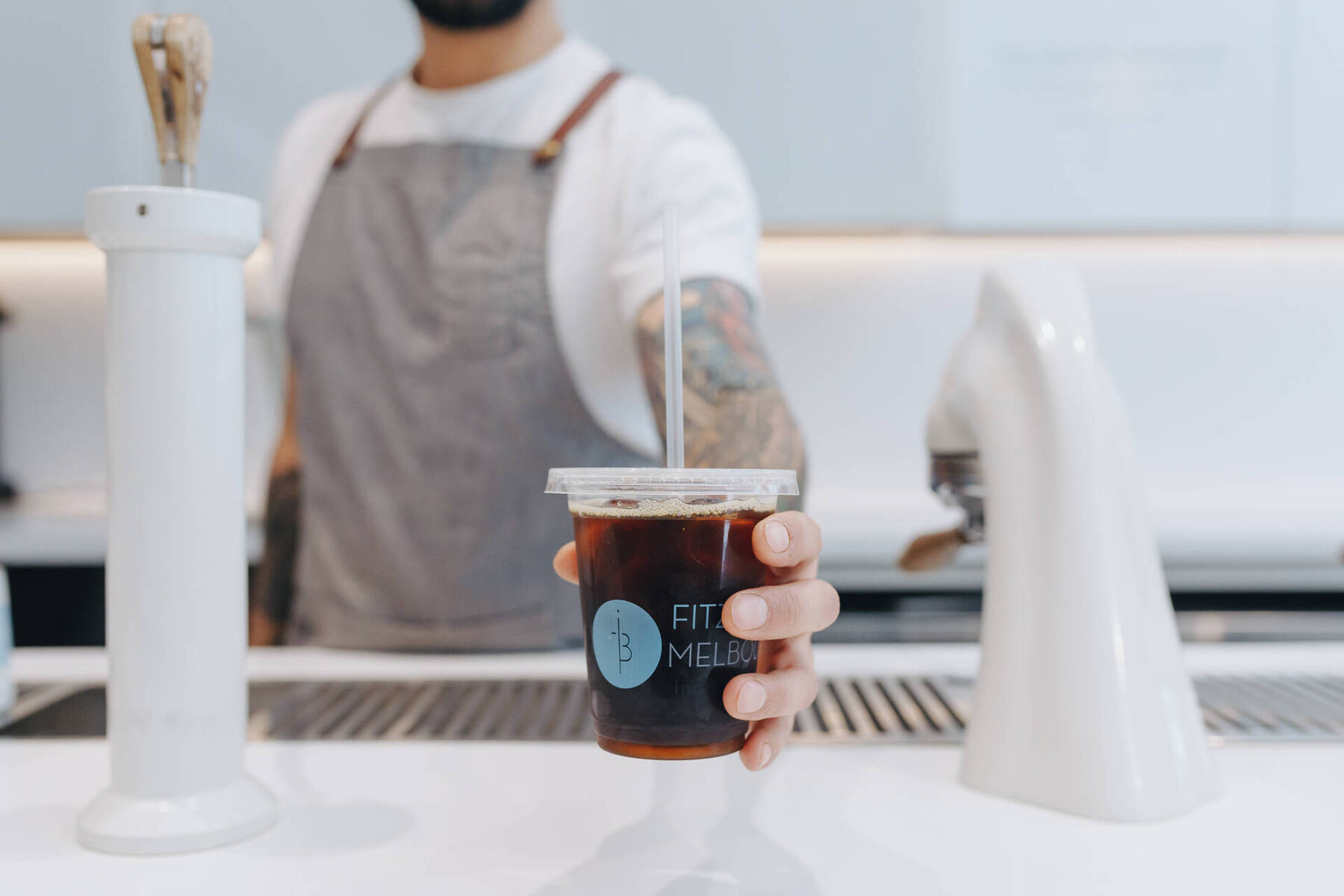 Seven Seeds roasters were an integral part of Melbourne’s third-wave coffee revolution in the early 2000s and their very first café is fittingly named after the 17th-century merchant who smuggled seven seeds of coffee from the Middle East to India, therefore introducing the delicious drink to a whole new market.

The café continues to serve some of the best coffee in town under a much-photographed chair-covered ceiling. As a result, Brother Baba Budan isn’t quite the local secret it once was so, for a more intimate experience, you could walk or catch a tram a few blocks to its cute little sister, Traveller (2/14 Crossley Street).

Hidden down a laneway, if you spy a neon boot hanging from one of the buildings you’ll know you have stumbled upon this standing-room-only coffee bar. Step inside to find out why the owners describe the interior as an ode to an old American Airstream caravan or grab something to go from the takeaway window. 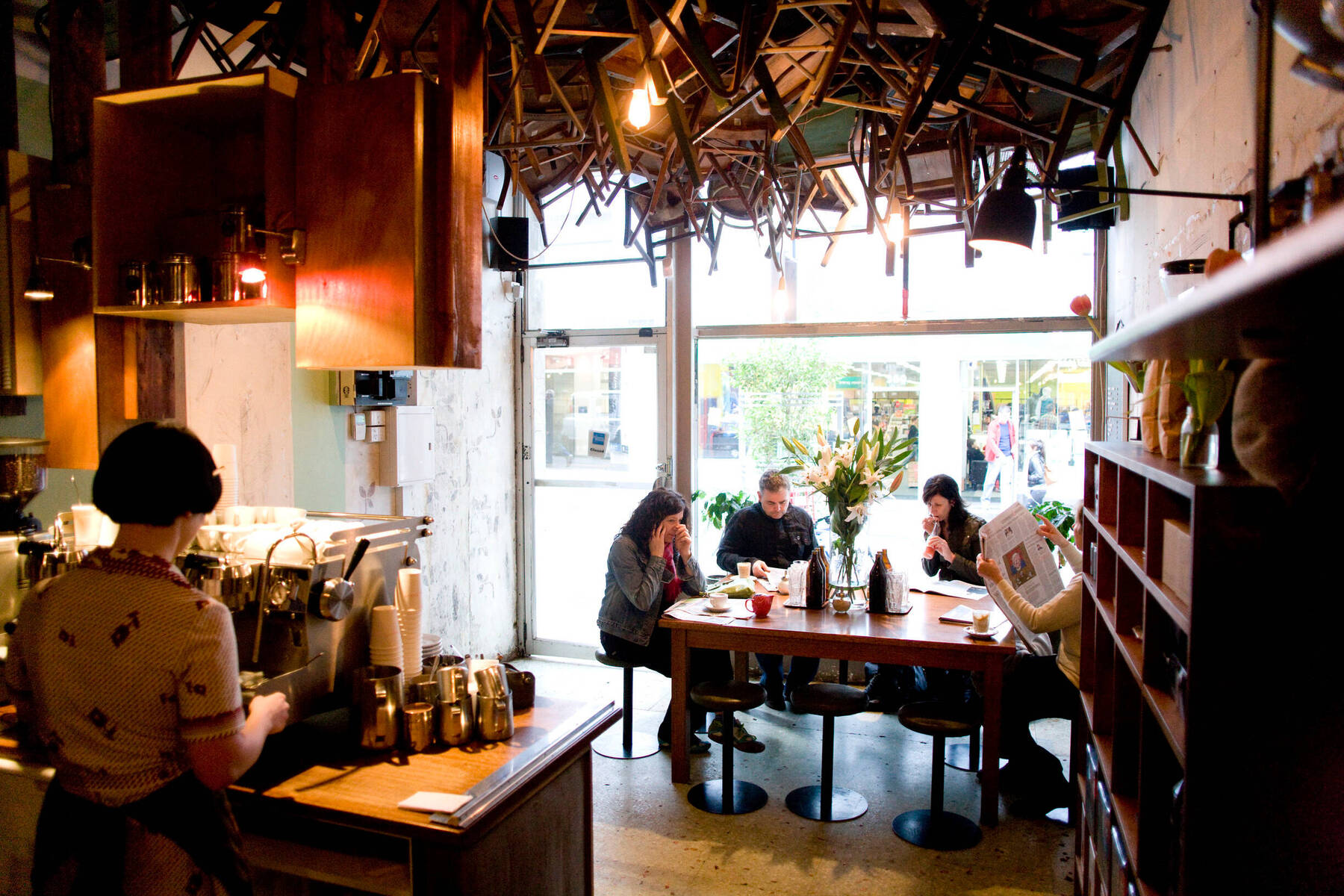 To check out one of the city’s prettiest green spaces, combine a visit to the League of Honest Coffee with an afternoon walk among the colourful flowers and tree-shaded lawns of Carlton Gardens. Single-origin beans from around the world come face to face with a pair of custom-painted Slayer coffee machines at this friendly spot in the top right corner of the CBD.

Aside from espresso and milk-based offerings, the brew bar is the place to explore a range of preparation methods – from Clover and Chemex to six-hour cold drip. While many CBD coffee spots don’t have room to serve much food beyond a few delicious pastries, here you’ll find a whole menu dedicated to toasted sandwiches and Turkish pides. 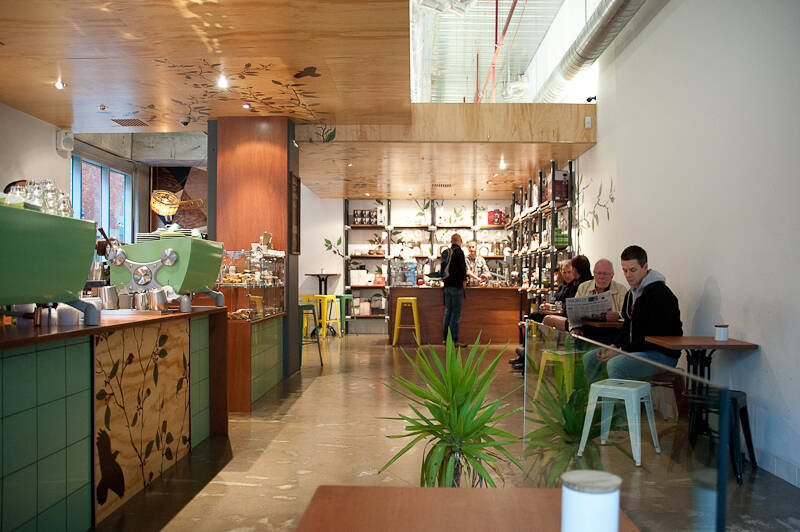 Helen is a freelance travel, food and drink, and lifestyle writer. Having lived in Melbourne and Kuala Lumpur, she is currently based in London but always plotting her next adventure. Her writing has appeared in international travel publications (Food & Travel magazine, Suitcase, Fah Thai, Scoot, Lifestyle Asia, Luxury Traveler). She has also written stories about destinations around the world for travel brands including Qantas, Air Asia, citizenM hotels, Belmond and Expedia.